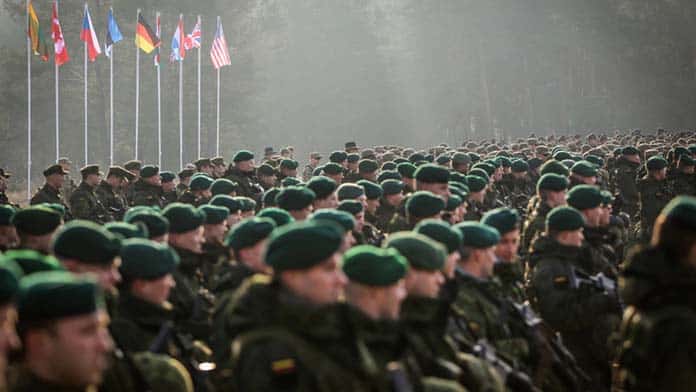 NATO is an instrument of US imperialist policy, not a defensive alliance, argues Adam Adelpour

The war in Ukraine has entered its fourth month and has become an entrenched proxy war between NATO and Russia. The bloodbath could grind on indefinitely.

The US and other NATO states are pouring heavy duty weapons into the country and Russia is concentrating its forces in the Donetsk and Luhansk regions in the East. It has increasingly become a First World War style conflict where immense firepower is mobilised to take small slices of territory.

But the fall-out from the war isn’t limited to Ukraine. As well as sparking global food and fuel shortages, the war has been used to justify the dangerous expansion of NATO into the Nordic states and large-scale re-armament in Germany. This will only sow the seeds for far larger and more dangerous future wars.

Alarmingly, Germany has made a historic shift towards remilitarisation with a $107 billion USD military spending package passed through the Bundestag in June.

Its military budget was slashed after the end of the Cold War, reducing the size of its armed forces from 500,000 in 1990 to around 200,000 today. But now Social Democratic Party Chancellor Olaf Scholz says “Germany will soon have the largest conventional army in Europe within NATO.”

Germany is also sending Ukraine multiple launch rocket systems and ammunition, a serious escalation. This follows a February decision to reverse a historic policy of not sending weapons into conflict zones.

There are frightening, historic shifts in Europe’s post-Second World War security set-up. Both Finland and Sweden applied to join NATO in May. Even at the height of the Cold War both countries remained neutral.

The dangers are immense. Finland shares a 1340 kilometre border with Russia. In March, Russia’s Foreign Ministry warned “there will be serious military and political consequences” if they join the alliance.

In April, Russia threatened to deploy nuclear weapons in the Baltic Sea as a countermeasure. In response, CIA director Bill Burns admitted the conflict could potentially go nuclear, saying “none of us can take lightly the threat posed by a potential resort to tactical nuclear weapons or low-yield nuclear weapons.”

As the war in Ukraine rages and Europe becomes increasingly militarised, NATO has presented itself as a “defensive alliance” and democratic bulwark against authoritarianism. In reality it is a blood soaked tool of US policy.

In a June speech Mircea Geoană, NATO Deputy Secretary General said: “NATO is a defensive Alliance whose primary responsibility is to protect one billion citizens in Europe and North America”.

NATO’s history shows this couldn’t be further from the truth. The alliance was established in 1949 as a tool for the US to exercise its imperial might. Following the Second World War the US emerged as the world’s biggest military, economic and political power. But it also faced competition from Russia, which had demonstrated its own military power during the world war and emerged with control over Eastern Europe.

NATO established US military bases and political influence permanently in Western Europe. From here it could limit Russian influence and prevent any European countries challenging the US.

NATO’s first secretary-general, the British officer Lord Ismay said the purpose of the alliance was “to keep the Russians out, the Americans in and the Germans down.”

NATO was anything but democratic. It included the Portuguese Salazar dictatorship amongst its first 12 members.

When the Greek military launched a coup and seized power in 1967 the right-wing Greek Colonels had the backing of NATO until they were overthrown in 1974. France waged bloody wars to defend its colonial empire in Algeria and in Indochina while it was a NATO member, with US backing.

NATO also interfered in the domestic politics of its member states. During the Cold War NATO was also used to attack the left.

In the name of preparing for a potential Russian invasion, NATO organised a secret network of armed groups called the “Gladio” network. The network had links to the far-right and fascist groups and attempted to destabilise member countries to prevent the left coming to power. The Gladio network has been accused of carrying out bombings and massacres in Italy, and Gladio forces joined the 1967 coup in Greece.

NATO adopted an aggressive policy of expansionism following the Cold War. The US emerged as the supreme world power following the fall of the USSR and took full advantage of Russia’s weakness to expand its footprint using NATO.

In 1990 US Secretary of State James Baker promised the Soviet President Mikhail Gorbachev that NATO would not expand east of Germany following German reunification. “NATO will not extend by a single inch to the East”, he said.

But in 1999 the alliance pushed towards Russia’s border as it swallowed Hungary, Poland and the Czech Republic. NATO launched its attack on Serbia shortly after. Seven more Eastern European countries joined in 2004 including Lithuania, Latvia and Estonia which were all formerly part of the USSR. As of 2019 there were 12 new NATO bases east of Germany and 13 Eastern European and Balkan countries had joined NATO.

The expansion of NATO is painted a purely a product of Russian aggression. But as the USSR collapsed, Mikhail Gorbachev actually proposed Russia join NATO. James Baker reportedly told him this was a “dream”.

It suited the US to keep Russia as an external threat to help hold NATO together. The US feared that in the absence of a strong external enemy, US control of its allies would diminish.

Zbigniew Brzezinski, an advisor to US President Bill Clinton, summarised the key goals of US policy in this period as “to prevent collusion and maintain security dependence amongst the vassals, to keep tributaries pliant and protected and to keep the barbarians from coming together.” Russia and China were the “barbarians”.

‘Out of area operations’

NATO has increasingly become an instrument of overseas war.

After the fall of the USSR NATO needed a new justification for its existence. There was a need to re-shape the rationale of the alliance.

A key aspect of this was the adoption of “out of area operations” which sought to project US power outside the territory of NATO in the name of “security” and defence of “Western values”.

NATO’s “out of area operations” began with bombing campaigns and “no fly zones” over warring Balkan countries in the 1990s. This culminated with an 11-week bombing campaign against Serbia. This left hundreds of civilians dead in the name of “humanitarianism”.

The US calculated that military intervention was necessary and used NATO to impose order on divided European governments and maintain NATO as a force for US interests in Europe.

NATO’s foreign intervention reached new heights when it began running the occupation of Afghanistan in 2003 after the earlier US invasion. The ongoing war killed tens of thousands, destroyed the country and ultimately led to the Taliban re-taking control last year. NATO headed the West’s attack on Libya in 2011. Seven months of bombardment left the country a dysfunctional war-zone contested by competing armies.

This series of bloody conflicts shows NATO is not “defensive” or “democratic”. NATO is a US-dominated, imperialist alliance willing to carry out overseas invasions. Now its expansion east has finally led to war. It armed Ukraine to the teeth and sought to put the country on the path to NATO membership with the help of Ukrainian President Zelensky.

In April NATO agreed to an Australian request to step up co-operation in the Asia Pacific region, including in maritime security.

NATO Secretary General Jens Stoltenberg said the alliance would provide more support to its “partners” in the region, including in maritime and cyber security. He said the Ukraine crisis has “global ramifications” and pointed to the “challenge” posed by China.

In a NATO strategy paper published in June China is mentioned more than Russia—over 180 times.

The militarization of Europe, the prospect of Finnish and Swedish NATO membership and the war raging in Ukraine are all unfolding against the backdrop the growing US rivalry with China.

The US is using the war in Ukraine to make an example of Russia and demonstrate its willingness to use military force to threaten China.

Australia has been eager to stoke anti-China policies in the Indo-Pacific. It has entered into the AUKUS military agreement with the US and UK which will see Australia acquire nuclear subs. This will drive a further militarization in the region and makes war more likely and more dangerous.

As the region becomes a tinderbox of imperialist rivalry, the new Prime Minister Anthony Albanese has remained committed to AUKUS and is seeking to deepen ties with NATO.

Albanese has dispatched 14 more armored vehicles to Ukraine as part of a $285 million package of military aid and will attend a NATO meeting in Europe in late June. He has described Australia as the “largest non-NATO contributor” to NATO’s efforts in Ukraine.

The priorities of Biden and Albanese are more grotesque than ever as the global economy tanks, inflation skyrockets and more and more people around the go without basic necessities. The only antidote to the warmongering of competing imperialist powers is an international, working-class fight against their wars and their military spending.