1971 Springbok tour: When campaigners scored a victory against racism 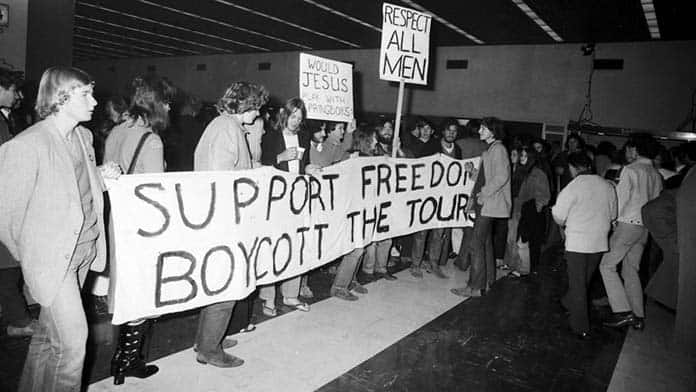 The campaign against the South African Springboks tour is full of lessons for our campaigns against racism today, argues Tom Orsag

In 1971, the Australian Left scored a fantastic victory against racism. From late June to August, black and white people united in protest against the racist South African Springbok Rugby Union tour, in every major city.

No Apartheid-era sporting team ever toured Australia again, until the release of Nelson Mandela in 1994 and the end of Apartheid in South Africa.

Australia’s history—from the dispossession and genocide of Aboriginal people, and the exclusion of non-Europeans through the White Australia Policy—has left a deep-seated racism among sections of the population.

But the campaign against the Springbok tour showed the power of mass protest movements to undermine racism, and to draw wide sections of Australian workers and the trade union movement into anti-racist struggle.

Initially, 85 per cent of people surveyed in opinion polls were in favour of the tour. If the Liberal-National Party government had had its way the racist tours would have continued. They had planned to allow the South African cricket team to tour in the summer following the Springboks trip. Despite its racist Apartheid policies, in 1953, cricket tours by South Africa were called “precious” by Robert Menzies, Liberal Party founder and Prime Minister for 16 years.

The protests against the Springboks changed all that. The movement pushed Don Bradman, chair of the Australian Cricket Board, to issue a statement cancelling the South African cricket tour. But he didn’t hide behind the claim, “We can’t guarantee their safety”, as the movement had expected. He declared, “We will not play them until they chose a team on a non-racial basis.”

The mostly white student left, Aboriginal activists and the union movement united to make the Springboks unwelcome and to disrupt the games as best they could, given the massive police mobilisation by State Liberal governments. Henry Bolte, the Victorian Liberal Premier, declared the protests a “rebellion against constituted authority”.

At first, there were only very small committees organising in the early and mid-1960s against Apartheid in sport. After the struggle against the Vietnam War took off, racism in Australia began to be more seriously challenged.

In Sydney in 1969-70, there were small demonstrations against apartheid politicians, all-white netballers, surf lifesavers, tennis players and golfer Gary Player. In June 1969 the South African Trade Minister, Haak, visited. Four hundred people rallied in Sydney. A group of 200 tried to force their way into Haak’s hotel. Haak had come to offer South African investment in an alumina plant on Aboriginal land. Protests followed him in Brisbane and Melbourne, while Labor MP Gordon Bryant angrily argued against South African investment.

Lloyd McDermott, the first Aboriginal person to play for the Australian Wallabies in 1962, felt he would be barred from touring South Africa in 1963, so he resigned from the Queensland squad that year, in order to avoid the controversy.

Tony Abrahams had toured South Africa with the Wallabies in 1969. While he didn’t like going, he felt he, “couldn’t get any real support for making a stand”. He was no radical, but what he saw in South Africa shocked him.

He wrote a letter to the Sydney Morning Herald as the tour ended, which sparked a debate about a sporting boycott.

When asked how difficult it was to speak out against the 1971 tour, Abrahams said, “You’d certainly got a lot of nasty feedback in Australian society.” One player picked to play for Australia who refused to play against the racially-exclusive Springboks was counselled by one of the Australian selectors, who said the player was a victim of a communist conspiracy.

Abrahams was one of six Australian Wallabies who were against the tour—the others were Paul Darvenzia, Terry Foreman, Barry McDonald, James Roxborough and Bruce Taafe. Their decision was unprecedented: no Australian players had ever refused to represent Australia on political grounds. Prime Minister Billy McMahon called them “a disgrace to their country”.

Liberal Party leaders in Australia conveniently forgot this appalling racism when they defended the tour by saying, “sport and politics shouldn’t mix.”

Apartheid South Africa craved international acceptance through the medium of sport. The Liberal Government of Billy McMahon was happy to oblige.

Forgetting politics at all, for the sake of the dollar, the Minister for Primary Industry, National Party deputy Ian Sinclair, said South Africa was “a market of growing importance.”

But when the Springboks arrived on 26 June 1971, polite petitioning gave way to direct action.

The first games were held in Perth and Adelaide and were disrupted by university students. By then, the unions were already in support of the protests against the tour. At the top of the union movement, ACTU President Bob Hawke opposed the tour, as did individual unions who voted to implement bans. The scale of the union action against the tour made it almost physically impossible for it to go ahead.

Airline workers at TAA (the government-owned airline) and Ansett (the private one) banned carrying the Springboks. They were forced to travel around Australia by chartered light aircraft, with the Federal government having a RAAF Hercules standing by “just in case”. A ban was placed on the maintenance of South African Airways planes. The Springboks were refused admission to one of the largest wineries in the Barossa Valley. Unions banned them from nearly every club and hotel in Adelaide. Postal workers put a ban on all South African mail. The Waterside Workers Federation, forerunners of the MUA, banned South African ships and 4000 wharfies in Melbourne went on strike for one week against the tour.

In Melbourne, 650 police were out in force with truncheons, to face 5000 mainly student protesters. The police baton charged and rode horses into the protest outside Olympic Park in what Peter Hain, British anti-apartheid activist, described as “legalised thuggery”.

In Sydney, an official of the construction union—the NSW BLF—and another union member tried to saw off the goal posts at the Sydney Cricket Ground the night before the game.

The most reactionary of state premiers, the Queensland National Party’s Joh Bjelke-Peterson, declared a state of emergency for 30 days and made the Exhibition Ground into a fortress to deter the protesters. It was the first time in Western history that a State of Emergency was declared over a football match.

The Queensland annual budget for “special operations” in 1971 was $50,000. The total cost of the three-week police protection of the Springboks was more than $150,000. The Queensland government transferred 450 police from country areas to suppress anti-apartheid demonstrations. The Trades and Labour Council threatened a general strike in response to the State of Emergency. Over 700 people were arrested nationally.

The protests were a united front between members of the Labor Party, such as Peter Beattie and Wayne Goss, two future Labor Premiers of Queensland, Meredith Burgmann, future President of the NSW Upper House and socialists and revolutionaries of all hues—anarchists in Brisbane, Maoists in Melbourne, Trotskyists like Denis Freney in Sydney. Also involved were a variety of Aboriginal activists and radicals—Billy Craigie, Paul Coe and Gary Foley, Kevin Gilbert, Roberts Sykes, Dennis Walker, Liela Watson and Sam Watson, as well as a host of middle-class liberals.

The protests against apartheid laid the basis for deepening the struggle against racism towards Aboriginal people. Meredith Burgmann said, “One of the arguments that kept being raised by the apologists for the South Africans was ‘Well why don’t you clean up your own backyard? You know what’s happening to Aborigines’. And in a funny way that was very healthy…Young Aboriginal activists of the time were very prominent in the demonstrations against the Springboks, so people like me had actually met and started working with Aboriginal activists.”

But not before the third anti-Vietnam War Moratorium rally in June 1971, in Sydney, when Paul Coe made a blistering speech, which Denis Freney described as “a brilliant speech, perhaps the best I’ve ever heard”. Meredith Burgmann described it as the “mother-fuckers speech”.

Coe criticised the protesters for being prepared to turn out en masse in support the oppressed people of all other countries but Australia. Coe argued said, “You raped our women, you stole our land, you massacred our ancestors, you destroyed our culture, and now—when we refused to die out as you expected—you want to kill us with your hypocrisy.”

A leaflet issued at an anti-apartheid rally in December 1971 argued, “The demonstrations against the Springboks this year won a notable victory… Now we believe it is vital for anti-racists to turn their attention to racism here.” That they did with the unity of blacks and whites in their thousands to defend the Aboriginal Tent Embassy in Canberra in 1972.

Forty years on we need to celebrate the victory against the Springboks. It showed how grassroots movements can break down racist ideas—and should be an example and inspiration to campaigners against racism today.

The union action showed that it was possible to win large numbers of workers to anti-racist ideas and helped to push the arguments about opposing the tour deep into Australian society. The campaign was proof that demonstrations, strikes and broad-based movements are the key to shifting public opinion and defeating racism.