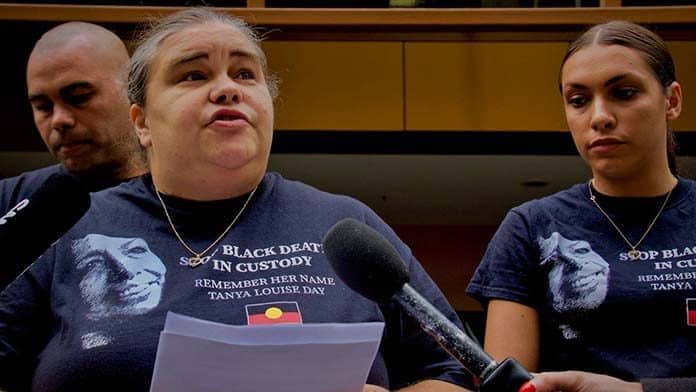 In April, the family of proud Yorta Yorta woman Tanya Day led a vigil to mark 26 years since the release of the landmark report of the Royal Commission into Aboriginal Deaths in Custody. Most recommendations from the report have not been implemented and there have been a shocking 411 Black deaths in custody since it was released.

Tanya Day died in a police cell at Castlemaine police station in 2017. Police picked Day off a train and put her in a cell under the Victorian government’s public drunkenness law. The autopsy report reveals that Day’s death was the result of a head injury sustained when she fell in the cell.

The criminalisaiton of public drunkenness was explicitly identified by the Royal Commission as contributing to high rates of Black deaths in custody.

The Andrews Labor government has refused to act on calls for decriminalisation, a reform passed years ago in most other jurisdictions. Disgracefully, Andrews has just committed $1.8 billion for an expansion of prisons, including a giant new jail north of Geelong.

Drawing a crowd of 200 people, the vigil in Atherton Gardens lit candles to mark every death in custody, then marched down Brunswick Street to Fitzroy Police station. Protestors projected images onto the station and defiantly chanted, “they say accident, we say murder”.

Advocates for the family have applied for the coronial inquest to consider “systematic racism” a factor in Day’s death, arguing that non-Indigenous people are drunk in public all the time but are not arrested.

The Human Rights Law Centre described systemic racism as, “rules—spoken and unspoken—by which these institutions run that perpetuate the unfair and harmful treatment of Aboriginal and Torres Strait Islander peoples since colonisation”. This would be the first time such a factor would be considered in a coronial inquest in Australia.

Just before the anniversary vigil in Melbourne, news broke about Cherdeena Wynne, another Aboriginal woman who died after an extensive ordeal with WA police. In a case of “mistaken identity”—racial profiling—police handcuffed and brutalised Wynne in her mother’s house at 3.30am, while looking for a different Aboriginal woman.

Wynne fled the house after the ordeal, only to have a second violent encounter with police. Paramedics took her to the hospital where she died five days later.

These two deaths illustrate how the horrific trauma of police violence is relived through generations of Aboriginal families.

Tanya Day’s late uncle Harrison Day also died in police custody. He was arrested for not paying a fine for public drunkenness and his death was examined by the Royal Commission. Similarly, Cherdeena Wynne’s father in WA, Warren Cooper, died 20 years ago while in a WA police watch house.

The Palaszczuk government is also under pressure from Aboriginal activists about the brutality of the Queensland police, particularly against young people.

In May, the families and supporters of 16-year-old Jaylen Close Armstrong and 17-year-old Rayshaun Carr marched in Toowoomba, Queensland. Police say the boys died driving a stolen car that rolled into a creek earlier this year. But the families deny the boys stole the car and allege foul play by the police.

In response to the protest, a police spokesperson threatened the families through the media, saying they would be arrested for blocking traffic. Supporters are waiting on a decision by the coroner as to whether the crash will be investigated as a death in custody.

Also in May, a demonstration was held in Brisbane after ABC Four Corners exposed the brutal treatment of children, mostly Aboriginal, in Queensland police watch houses. Children as young as ten have been kept for up to a month in maximum-security cells in breach of clear policies.

At all these demonstrations, activists have highlighted the deeply-entrenched patterns of over-incarceration, over-policing and intense racial profiling of Aboriginal communities—patterns forged through colonial occupation from 1788 that remain lethal today.

Liberals on the attack

While state Labor governments shut the doors in the face of families seeking justice, the re-election of a Morrison government federally is set to intensify the crises facing Aboriginal communities.

Racist rhetoric has already ramped up since the election, with Liberal Minister Alan Tudge claiming the biggest issue facing Indigenous communities is “chronic alcohol abuse fuelled by the welfare dollar” and flagging further expansion of the punitive Cashless Debit Card.

In the budget released in the lead up the election, the Liberals rolled all funding for Aboriginal Legal Services into the “mainstream” Legal Aid funding stream provided to state governments. This leaves the future existence of these vital services at the whim of potentially hostile state governments.