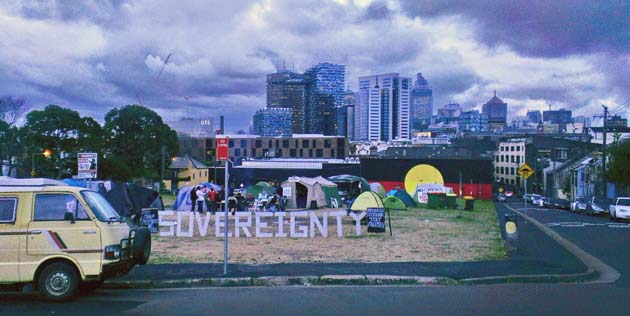 The Redfern Aboriginal Tent Embassy is currently standing strong against repeated threats of eviction from Aboriginal land at the Block in Redfern.

The Embassy was established on “sorry day”, 26 May last year, to stop bulldozers moving onto the Block to begin construction of a new corporate development. The camp has successfully stopped any construction for a full ten months.

The Block was returned to Aboriginal ownership in 1972, following a long fight by local Aboriginal activists and supporters, including the Builders’ Labourers Federation, for a grant of land and money to develop Aboriginal community housing. It was a vital hub for the radical Aboriginal rights struggle that was taking off around the country.

But in 2004, the Aboriginal Housing Company (AHC), which controls the land, started evicting Aboriginal residents. Once a grassroots organisation accountable to the community, membership of the AHC has been closed for many years and the leadership group around Mick Mundine have aggressively pursued commercial aims and embraced the gentrification of Redfern.

According to local Aboriginal activist Ray Jackson, senior government officials, representatives from the local police and Mick Mundine himself all began arguing publicly that there should be “no black enclave at the block”. Mundine offered the land to major property developer Deicorp to build units and a commercial precinct where space is sold to the highest bidder. Money from this development will apparently then be used to then build just 20 affordable housing units for Aboriginal people. The racism of Deicorp was exposed last December when online advertising for another one of their Redfern projects, Dei Cotta apartments, proclaimed, “the Aboriginals have already moved out, now Redfern is the last virgin suburb close to the city”.

The AHC sell-out is just one example of the impact of a concerted campaign by government and big corporations over the last two decades to repackage capitalist development as offering a solution to Aboriginal disadvantage. The “Aboriginal Employment Covenant”, a plan led by mining magnate Andrew Forrest to employ 50,000 Aboriginal people in the corporate sector, has failed spectacularly, with skyrocketing black unemployment, but Forrest still plays a central role in government policy. The Redfern Embassy is an important symbol of the struggle against this approach.

Corporate developers are only interested in profiting from Aboriginal land. Winning Aboriginal housing requires a hard fight against the system.

Since 2008, there has been a national moratorium on government funding for any new Aboriginal housing, outside a handful of “growth towns” in remote areas. This despite 25 per cent of all homeless people in Australia being Aboriginal, from less than 3 per cent of the general population.

The vicious assimilation driving forced remote homeland communities in WA is also on display in the heart of Sydney.

The Redfern Tent Embassy needs supporters on site to prevent the threat of eviction, please visit to find out more and offer your assistance. Visit their Facebook page here