As climate change melts the Arctic, all oil companies see are new chances for profit 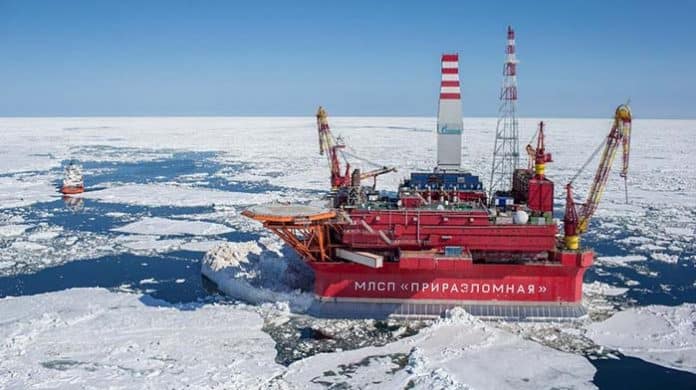 Donald Trump is moving to sell off leases over 1.6 million acres of the Arctic National Wildlife Refuge in Alaska, opening the area up to oil and gas exploration for the first time.

Fossil fuel giants will stop at nothing to get their hands on new oil and gas reserves in the most pristine parts of the world.

They even see climate change as an opportunity to access fossil fuel reserves that were previously unreachable.

The Arctic environment is already rapidly changing, with the region heating twice as fast as the rest of the planet. Half of the ice coverage on the Bering Sea between Alaska and Russia disappeared during a two-week period in February 2018. For the last 30 years, Arctic ice levels have been declining at a rate of 10 per cent per decade.

Oil and gas companies are rushing to exploit the area. The melting ice is opening up new trade routes and energy supplies north of the Arctic circle.

It is estimated that fossil fuels extracted from the Arctic could add up to five million additional metric tonnes of carbon dioxide into the atmosphere each year—equivalent to another million cars on the road.

These include hard to reach oil fields in Siberia, and a new proposed supply route from Russia to Europe. The Northern Sea Route along the Arctic coastline sits along an important economic area for Russia, already accounting for between 10 per cent and 30 per cent of its GDP. Control over Arctic oil and gas shipping routes could create a 21st century Suez Canal geo-political battle.

Increased ship movements will further damage the area. The International Maritime Organisation is considering a ban on the burning of heavy fuel in Arctic waters, in an attempt to quell environmental degradation from oil and gas shipping routes including increasing amounts of black carbon, ice pollution and oil spills.

Scramble for the Arctic

A struggle is emerging over drilling for oil and gas in the Arctic, with Russia, China and the US leading the charge, staking claim at the new opportunities for resource extraction.

The Arctic contains up to 90 billion barrels of oil and 47 trillion cubic metres of gas. This equates to 13 per cent of the world’s undiscovered oil and 30 per cent of undiscovered gas. Russia owns 58 per cent of Arctic resources while only 18 per cent is owned by the US.

US Energy Secretary Rick Perry has called for “free nations” to resist attempts from those “that seek to dominate the Arctic from the outside”—a reference to the growing influence of Russia and China, the self-described “near arctic” power, in the region.

The US has ambitions to become the world’s leading Liquefied Natural Gas (LNG) exporter—projected to be producing 100 million tonnes by 2024, fuelled by expected growth in demand in Asia. But the US faces higher extraction and transportation costs to get fossil fuels to markets in Asia and in Europe.

Since 2017, global fossil fuel giant BP has been lobbying the Trump Administration to re-open the Arctic for oil and gas exploration, with BP and Exxon-Mobil committing $20 million in May this year to develop LNG in Alaska.

The US Fish and Wildlife Service has accused the Bureau of Land Management (BLM) of underestimating the impacts of the proposed oil leases on the climate. Contrary to popular scientific consensus, the BLM suggested in their environmental impact statement for the project that global warming is cyclical, rather than human induced.

China also has a stake in the game, publishing a white paper in 2018 outlining its interests in the Arctic. To support an economy dependent on gas imports for use in manufacturing, China is desperate to secure and control new oil and gas supplies.

Russia too is aiming to expand its influence in the gas and energy market through companies such as Total SA and Novatek PJSC.

In June 2019, Russian and Chinese companies commenced a joint venture to manage a fleet of ice-breaker tankers to move Arctic LNG to markets in Europe and Asia.

Fossil fuel companies using climate change as an opportunity to open new sources of profits is an obscene example of the logic of capitalism and the scramble for profits.

They will keep pumping out new sources of carbon emissions even as the world goes to pieces underneath them—unless we stop them.

It’s time to demand that people and the planet come before profit and to put a stop to the extraction of oil and gas in the Arctic—and everywhere else.