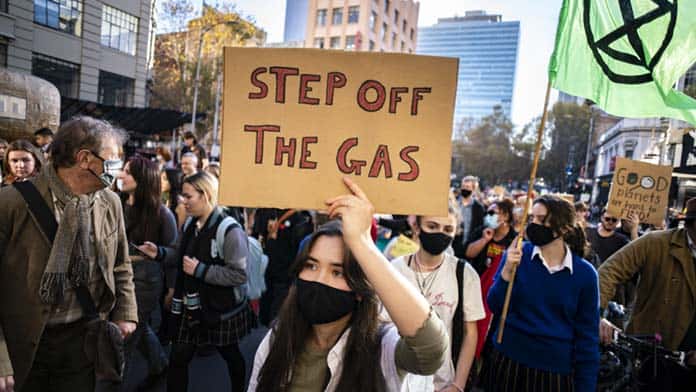 Even after pushing its 43 per cent climate target through parliament, the new Labor government has made it clear that it’s still open season for gas and coal projects.

Anthony Albanese attended the Minerals Council’s annual dinner in early September, reassuring mining company bosses in a speech that Labor would support their criminal plans for new fossil fuel projects across the country.

The message was, “Albanese backs coal and gas export boom”, as the Financial Review put it.

A week earlier, the government approved ten new areas for oil and gas exploration off the coasts of WA, the NT, Victoria, and Ashmore and Cartier islands.

The same day she announced the approval of the first two offshore carbon capture and storage projects since 2014, backing an oil and gas company effort to greenwash their ongoing increase in fossil fuel emissions.

In alarm, 100 scientists signed an open letter calling on the government to take climate impacts into account on project approvals, warning, “Any new coal or gas projects will dangerously worsen climate change.”

There is a surge in fossil fuel projects taking place nationwide as mining companies look to cash in on high export prices.

This includes opening new gas fields in the Beetaloo in the NT, the Bowen and Galilee Basins in Queensland and the massive Scarborough carbon bomb in the Burrup Hub in WA, with domestic emissions alone equivalent to opening five new coal power stations.

Traditional owners in the Tiwi islands are also challenging Santos’ $5 billion Barossa gas project, which is almost half complete.

Santos has all other approvals for the project finalised and claims that a series of emails it sent to the Tiwi Land Council were enough to tick off requirements for consultation.

Santos has also bought the company building the Hunter Gas Pipeline, in an effort to fast track delivery of gas from its proposed Narrabri Pilliga coal seam gas project.

This fossil fuel expansion threatens to make even Labor’s inadequate 43 per cent reduction target by 2030 impossible. But the International Energy Agency has warned that no more coal or gas projects are possible if warming is going to be kept to 1.5 degrees.

There are at least 114 new fossil fuel projects in the planning stage nationwide.

Albanese says he wants to end the climate wars.

But he is still waging a reckless war on the planet’s future. We need to build a fight to stop his efforts to pump out more fossil fuels.