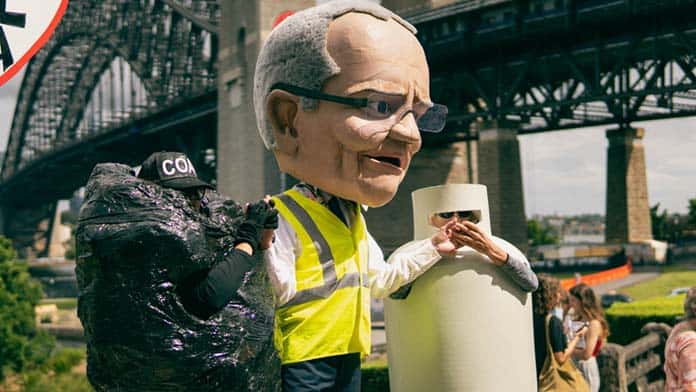 Yet while Labor does have better climate policy, it has not sought to highlight this during the campaign.

Labor are still trying to do a double act—to appear to be taking action to address climate change while keeping the coal and gas mining industries on side. They are paranoid about electoral scare campaigns, giving support to Morrison’s “gas-fired recovery” initiatives including $600 million to build the Kurri Kurri diesel/gas power station, while nearby gas-fired power stations are sitting idle. They say they will spend up to $700 million extra to ensure it can run on green hydrogen, an extraordinary waste of over $1 billion.

However, the International Energy Agency has said that no new coal and gas projects are possible if we are to limit global heating to 1.5°. This is deeply challenging to Australia’s ruling class, and their profits.

A key question after the election will be the future of the government’s “gas-fired recovery” plans, which seek to expand current basins and open up new onshore gas basins. There are now has multiple programs and funding streams attached to it. The government has completed three “strategic plans” to open up new gas basins, with over $600 million for the Betaloo Basin (NT), $60 million for the Cooper-Advale Basin (SA and Qld), and $20 million for the North Bowen and Galilee Basin (Qld).

Opening the Pilliga Narrabri basin is part of this plan. Initial exploration and development approval have already taken place here. Santos do not have consent of Gomeroi Traditional Owners, but they are seeking permission in the Native Title Tribunal to proceed with the project regardless.

In 2021 the government launched its Future Gas Infrastructure Investment Framework, offering financial support in the form of grants or loans. In March it announced the first set of grants, $50 million for seven projects, and invited another round of Expressions of Interest to hand out even more money. It is very likely that applications for funding to advance the Narrabri gas project sit in the pile of new applications.

Unfortunately, Labor’s policy platform, approved after a sharp internal debate, includes “support for new gas projects and associated infrastructure” and accepts that “gas has an important role to play in achieving Labor’s target of net zero emissions by 2050”.

The official Energy Market Operator’s latest plan for the electricity system does project ongoing use of gas during power peaks, particularly in winter. But it also says gas could be replaced by alternative technologies—gas is just the cheapest option.

If elected, Labor must be challenged to cancel these gas programs and grants, and to cancel the construction of the Kurri Kurri diesel/gas plant. Investments should be made in reducing gas demand, electrifying households and industry, and banning new gas connections as existing basins dry up. The Victorian and ACT governments are already doing this.

Public ownership and investment on the table

One welcome development this election is a greater emphasis on public ownership and investment. Labor says it will establish a Rewiring the Nation Corporation to invest $20 billion in the electricity grid to allow it to incorporate renewable energy, as recommended in the Integrated System Plan. This could mean anything from direct ownership, to funding of other publicly funded entities, to low-cost finance for private electricity companies. The union movement and climate movement will need to make its voice heard to ensure that this public investment results in public ownership.

The Greens have announced a policy of investing $40 billion in publicly owned renewable energy, built through Commonwealth-owned Snowy Hydro. The company already owns and operates 16 power stations across NSW, Victoria and the ACT, and retails electricity as Red Energy and Lumo. The Greens also say they will require it to sell electricity at cost, and to cancel the Kurri Kurri project.

Workers in fossil fuel industries remain uncertain about their future. The government needs to act to ensure they can move to secure, well paid jobs in other industries. Establishing public authorities to carry this out is part of Labor’s platform, but they have avoided mentioning it or what it will deliver during the campaign.

In addition to supporting transition authorities and investment, The Greens have announced a Job-for-Job Guarantee, a ten year 50 per cent wage subsidy for any coal worker, or 12 years for workers over 55. Job guarantees are supported by unions and have been a key part of energy transitions internationally.

Whoever forms government after 21 May, the climate movement will still have a big fight on its hands.