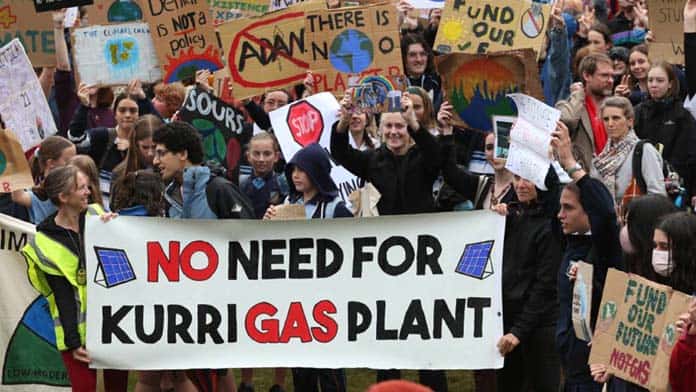 Opposition is growing to Scott Morrison’s $600 million plan for a new gas plant at Kurri Kurri in NSW.

Demands against his support for a “gas-fired recovery” and spending to expand fossil fuels were at the centre of the 21 May student Climate Strike.

Key unions have also opposed the new project. Allen Hicks, National Secretary of the Electrical Trades Union (ETU), told the Sydney Climate Strike that, “The proposed Kurri Kurri gas peaking generation is a clear example of where a federal government gets it completely wrong. It tried to force the private sector into building a gas peaking station and they said, ‘it’s not viable and we’re not going to do it’.

“So instead of listening to the experts what does the federal government do? They go and grab $600 million of taxpayers’ money and invest it in something that isn’t viable.

“It’s a disgrace that this federal government is wasting tax payers’ dollars on something that it shouldn’t be doing.”

Instead, he argued, the money should be used to, “build some offshore wind… The offshore wind sector provides massive job opportunities to build towers, turbines, sub-sea foundations, cables, offshore substations, and work for maritime workers.”

Offshore wind projects in the Hunter, Illawarra and Eden, near existing fossil fuel reliant communities in NSW alone, have the potential to create 7.2 GW of power as well as thousands of jobs in the maritime, electrical and manufacturing industries.

“The people in the regions around Kurri Kurri, the Hunter Valley, they deserve jobs, they deserve investment. But they don’t deserve something that’s not viable,” said Hicks.

“What we do need is for the Federal Government to build publicly-owned renewable energy so we can rapidly reduce emissions, provide good jobs and a just transition for energy workers,” Glen Williams, MUA Newcastle branch Secretary, said in a recent statement.

Rather than spending public money on another gas project that will create just a handful of jobs and further contribute to global warming, public money should instead be spent on renewable energy.

There is also local opposition to the Kurri Kurri plant in the Hunter Valley. The Gas Free Hunter Alliance joined the Sydney Knitting Nannas, Northern Beaches Climate Action, Lock the Gate, and Coal Fields for Climate Action to protest outside NSW Planning Minister Rob Stokes’ office on 4 June, calling on him to reject the project.

Submissions to the NSW Department of Planning process closed on 9 June, with 241 out of 247 submissions opposed to the plant. Over 10,000 people have signed a petition to the NSW Energy Minister.

“The overwhelming percentage of submissions opposed to the Morrison Government’s foolish Kurri Kurri gas plant demonstrates just how few people would benefit from this polluting project. No one wants this gas-fired failure,” Georgina Woods of the Lock the Gate Alliance said.

The Kurri Kurri site used to be an aluminium smelter and was purchased in 2020 by property developers and Liberal Party donors Jeff McCloy and John Stevens. To justify the $600 million investment, the Morrison government is claiming that the plant will create jobs for the Hunter Valley region and that more gas is needed to replace the closing Liddell power station.

Energy experts have universally rejected this, saying another gas “peaking” plant is not needed.

Another report by Victoria University’s energy policy centre in June concluded that, although there are already three gas-powered peaking plants in NSW, there will be little demand for any of them in the future, let alone the extra electricity produced by Kurri Kurri.

The new plant is also likely to cost at least 50 per cent more to build than the $600 million already committed, it said.

And, despite Morrison’s promise of jobs, the Kurri Kurri project will provide only 600 temporary jobs during construction and just 20 once operational.

Its gas supply is slated to come from the Santos Narrabri project, which, among other things, will threaten the water supply from the Great Artesian Basin and will desecrate Gamilaraay lands in the Piliga forests.

We have to keep fighting to force them to change by continuing to build trade union support, support in universities and schools and the ongoing climate movement. This is the kind of power that can win climate jobs and a just transition.