Protest at CFMEU office shows why vaccine mandates are a disaster 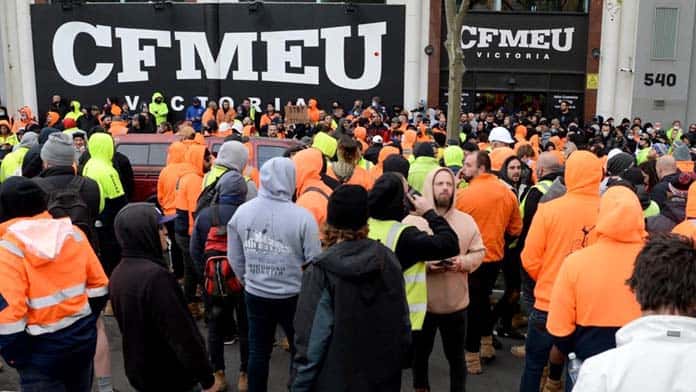 The anger from workers at yesterday’s protest over mandatory vaccination outside the CFMEU Melbourne offices has shocked and bewildered many unionists. The possibility that right-wing elements could have led workers to attack officials and smash windows is confronting.

While it is true that conspiracy theory and far right chat groups sent out messages telling people to turn up dressed in high-vis clothing in an effort to masquerade as construction workers, the protest can’t just be dismissed. There were CFMEU members there because their jobs are on the line due to the mandatory vaccination decree by the state government.

CFMEU Victorian Secretary John Setka says he is against mandatory vaccination. But the CFMEU has effectively gone along with the state government’s decree by doing nothing to defend members who haven’t been vaccinated. Setka had no answers when asked what was the union’s response to the threat to sack workers who were not vaccinated by Friday.

The vaccine mandate has already driven some workers into the arms of the anti-vaxxers and the far right. Last Thursday the Victorian government announced that construction workers would be barred from working unless they had received a vaccination. It gave them just a week to get their first jab.

The Labor government’s move to shut down the construction industry for two weeks will only make things worse.

Workers in other industries and in other states are going to face similar “no jab, no job” ultimatums in the coming days and weeks.

Despite the ACTU saying it expected that vaccination in most industries would be voluntary, it has done nothing to oppose mandatory vaccination. Sally McManus’s position that the ACTU will just accept a “no jab, no job” position if it is mandated by government is disgraceful. Such a position will do nothing to encourage workers to get vaccinated.

The CFMEU and other unions need to take a stand against the no jab, no job decree. Workers should not be losing their jobs for not being vaccinated.

There is no sign that vaccine hesitancy is a major issue in any industry. Having small numbers of unvaccinated workers on the job is not a public health risk.

The majority of people hesitating about getting jabbed are not hard anti-vaxxers. A poll last week found that just 6 per cent of the population say they’d “never get vaccinated”, with another 14 per cent saying they would eventually get vaccinated but haven’t booked yet.

The union could have organised for health workers to tour construction sites, talking to workers about their concerns and administering vaccinations. Instead it has allowed the government to force them into it. This is the same authoritarian approach that has seen police and the army sent in to enforce lockdown measures.

The police used the smashing of the CFMEU’s office windows as an excuse to again use rubber bullets and tear gas on a protest crowd. The union should condemn the police violence.

Like the population in general, workers need to be encouraged, not forced to get vaccinated. Allowing government and bosses to drive wedges between vaccinated and unvaccinated workers will only weaken the unions, when we need maximum unity to fight for safety and conditions as workplaces open up.

COVID safety in construction has become a major issue. An outbreak at one construction site in Box Hill in Melbourne has led to at least 140 cases.

Sites had already been limited to 25 per cent of their usual workforce, or five people on smaller projects.

The bosses are doing little to ensure COVID safety, with government inspections last Thursday finding three out of four construction sites were not complying with health directions.

Yet throughout the COVID crisis, the CFMEU has been more concerned to work with employers to keeping the industry running. This approach undermines the safety measures that are needed. The union has not sought to organise its members to fight for COVID safety, or build an understanding of what was necessary to keep worksites safe.

Nor has there been any effort to fight for a wage subsidy that replaces workers’ lost income if there are COVID outbreaks and workers have to isolate. Even JobKeeper at $1500 a fortnight was an enormous pay cut for most workers in construction.

Our union leaders must take a stand against “no jab, no job”. “Opening up” can’t just be left to the bosses and state and federal government. Frontline and essential workers have already shouldered the burden of the pandemic.

The CFMEU should be demanding full pay for all construction workers for the next two weeks, and making it clear they will defend the jobs of any unvaccinated worker when the industry starts again.