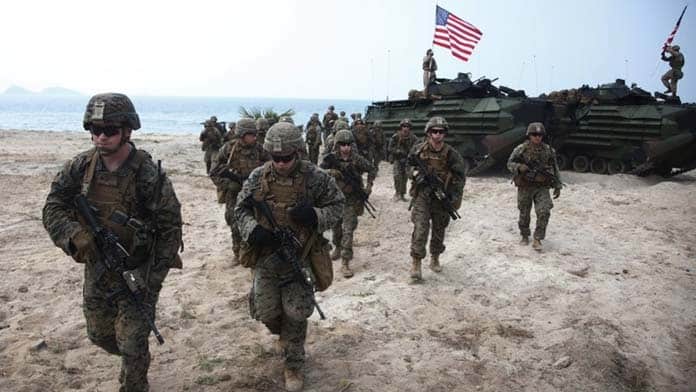 The US, backed by Australia, is moving recklessly towards war over Taiwan, a war that would be catastrophic for the people of Taiwan, the people of China, and the world as a whole.

In early August, the Speaker of the US House of Representatives, Nancy Pelosi, made a provocative visit to Taiwan. China responded with the most aggressive live-fire military exercises ever seen around the island. China also broke off regular contacts with American officials over military concerns, climate change, and other important issues.

In October, at the Chinese Communist Party’s 20th Congress, Xi Jinping reiterated the government’s determination to reunite with Taiwan, and its ultimate willingness to use force.

The US Secretary of State, Anthony Blinken, responded by claiming (without any evidence) that China planned a “much faster timeline” for taking over Taiwan far sooner than the US had previously believed.

The head of the US Navy, Admiral Mike Gilday, then declared that all the efforts of the US Navy were being bent towards being ready to “fight tonight”; whereas the US had been planning for war over Taiwan around 2027, “in my mind that has to be a 2022 window, or potentially a 2023 window”.

More than ever we need to understand the issues involved over Taiwan, because both Coalition and Labor governments have made it absolutely clear that the Australia will be involved in any war. They want to make sure Australia’s imperialist interests in the Pacific and Asia are maintained, including their ability to push back on China’s influence in the region.

Origins of the Taiwan problem

When Japan was defeated in the Second World War it was forced to surrender formerly conquered territories. Taiwan became part of the Republic of China, which was run by one of the most brutal and corrupt dictatorships of the 20th century, the Kuomintang (KMT, Nationalist party) led by Chiang Kai-Shek.

The KMT had spent most of the war organising extermination drives against communists rather than resisting the Japanese, hoping that a victory of the US and its allies would keep them in power.

But when the Communist Party won the civil war in 1949, the KMT government and military (around two million people), retreated to the island of Taiwan. They were not welcome there. The KMT had already put the island under martial law and murdered between 18,000 and 28,000 people (from a population smaller than Melbourne’s today) in response to a popular uprising. This “White Terror” lasted 38 years.

For the next 30 years, the US military protected Chiang’s dictatorship. Without this, there would have been no Taiwanese regime and no division of China.

When the United Nations was founded in 1944, China was made a permanent member of the Security Council. Despite its defeat in 1949, the pro-US KMT was allowed to continue to represent China. It declared that there was only “one China”, and that this rump dictatorship in Taiwan was supposedly China’s legitimate government, a fiction supported by the US and its allies, including Australia.

In October 1971, the situation dramatically changed. The UN voted for China to be represented by the People’s Republic of China (PRC). With both the US and China concerned about a Russian military threat, US President Richard Nixon visited China in 1972. The United States agreed to recognise the PRC as “China”, shift its embassy to Beijing and withdraw all military forces from Taiwan. But its military support continued, via the Taiwan Relations Act.

The US decision to recognise the PRC represented a crisis for the Taiwan dictatorship. The mainland “communist threat” they had used to justify dictatorship was now recognised by even the US as the legitimate Chinese government.

The regime decided to reform rather than face revolt. Martial law was ended in 1987 and the first democratic elections held in 1996. The economy was liberalised and Taiwanese businesses allowed to invest overseas. Firms such as Foxconn (which assembles iPhones) flooded into the mainland, making vast profits exploiting low-paid workers.

Elements of the Taiwanese political elite, influential in the KMT, moved from dreams of invading China and crushing the communist government to long-term coexistence on the current basis, or even eventual reunification.

One of the new political parties, the Democratic People’s Party (DPP) became the nationalist party opposed to closer integration with China, looking to American imperialism as a supposed shield against military and economic pressure from the PRC.

This growth of independence politics in Taiwan in turn alarmed the PRC, and it sanctioned and threatened pro-independence politicians and activists. Xi Jinping’s crushing of the Hong Kong democracy movement in 2020 further strengthened the DPP.

Taiwanese official politics is now primarily divided on the issue of relations with the PRC. Working class interests have been largely subordinated.

At the same time as DPP anti-PRC nationalism was gaining ground in Taiwan, the American government was becoming alarmed at the growth of China’s economy and military power.

In 2001 the US economy produced eight times as much as China; in 2011 it was only twice as much; and in 2021 it was just 1.3 times. China is now the world’s largest manufacturing nation, producing around 30 per cent of global output, nearly double the US share at 17 per cent. This has allowed China to dramatically expand its military capacity.

As China rose as an economic power, US President Obama responded with his “Pivot to Asia” in 2012, then Trump with his trade war. Biden has gone way further.

Alongside a massive escalation in its military activities in the South China Sea and the Taiwan Straits, the US has launched all-out war on China’s attempt to produce more advanced semiconductors such as those used in areas like Artificial Intelligence and advanced weaponry.

The US has put bans on any US citizen or company being involved in any way in China’s advanced chip-making. It is spending over $US50 billion on subsidies for chip makers to set up fabrication in the US. Biden is determined to force as many countries and businesses as possible to choose involvement with the American-led capitalism rather than China.

The rivalry between the US and China shows how intimately capitalist economic and military competition is linked together.

Because China’s military is still weaker than that of the US, and less technologically advanced, there is an advantage for the US in bringing on a crisis sooner rather than later because China is closing the gap. That’s why the anti-China rhetoric and government policies have become so fevered in the past four years.

What now for Taiwan?

This is the context for the current dispute over Taiwan. We’ve seen an endless procession of American politicians visiting Taiwan to express their “solidarity” with the Taiwanese people, and their “vibrant democracy”. This is gut-wrenching hypocrisy.

The American ruling class has never sent its troops abroad to fight for democracy; it’s only ever been about their profits, their investments, and the ability of their military to dominate. During the Cold War, the US backed brutal dictators across Asia: Park in South Korea, Marcos in the Philippines, Suharto in Indonesia, as well as Taiwan’s Chiang. In Indo-China, they supported France’s war to retain control of its colonies, and when France was defeated, sent over half a million troops into South Vietnam to prop up a pro-western dictatorship.

Despite this, many people feel that Taiwan has a right to look to the US to protect its independence and “democracy”.

If it were just a question of China and Taiwan, there would be no issue. The Uighurs of Xinjiang have a right to independence from the tyranny of the PRC, as do the people of Tibet.

Taiwan is different because its physical location is strategically important to both Chinese and American imperialism. It is one of a long series of islands, mostly controlled by Japan, and US bases in Japan, South Korea, the Philippines and the Pacific that give the US the ability to control sea traffic to and from China’s entire coastline.

US access to Taiwan has always presented a military threat to the PRC, while “reunification” is central to the Chinese Communist Party’s nationalist ideology, one of the few elements of their propaganda that has widespread support.

While Taiwan today operates independently from the Chinese regime, any formal declaration of independence seeking recognition from other states would be a provocation to force China to either back down or attack, and provide an excuse for the US to escalate its aggressive military stance against China.

No war that followed would be a war for democracy. The world would face the spectre of nuclear annihilation.

The situation for the people of Taiwan is awful. But allying with US imperialism is no solution.

Think about the issue from the standpoint of the people of the Japanese-controlled island of Okinawa, who have had to suffer the trauma of living with 31 US military bases on their island for decades. Doesn’t Taiwan relying on the US mean supporting the presence of those bases? They would be at the centre of any US military action against China. What does it mean for the people of Guam, or Palau, or the Federated States of Micronesia, whose societies have been taken over by the US military, so that it can dominate the Pacific?

The only way forward—in Taiwan and Australia—is to challenge the imperialist rivalry that is driving the world towards war.

First and foremost that means challenging the great power supported by your own ruling class.

And it means strengthening the working class movement as the only force that has the power to ultimately destroy imperialism (and the capitalist system that drives it).

In Australia, the new Labor government is banging the drums of war as loudly as the Liberals did. Socialists need to oppose any war with China and fight against our own government’s role bolstering US imperialism and its plans to dramatic expand Australian militarism.

Immediately this means fighting Labor’s appalling decision to invite American B52 bombers to be stationed in the Northern Territory and campaigning against the AUKUS agreement to buy nuclear powered submarines.

Nancy Pelosi’s provocative visit to Taiwan in August has signalled a dangerous new phase in the rivalry between the US and China.