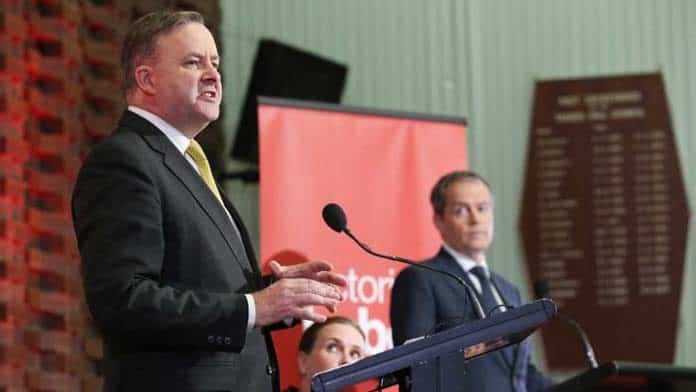 Anthony Albanese, a leading figure in the party’s left faction, is set to be elected as new leader of the Labor Party unopposed. In the aftermath of Bill Shorten’s election defeat, even the right-wing of the party is backing him. Arch right-wing former NSW Premier Bob Carr sang Albanese’s praises to the Financial Review, “The key thing is he has left the illusions of the Left well behind him without becoming some sort of devotee of the worst type of capitalism.”

And “aspiration” is back. Albanese has been telling anyone who will listen, “One of the things about the suburbs is the issue of aspiration. People do aspire to improve their living standards, their wages, and they do want more opportunities for their kids.”

Leadership bid or not, Anthony Albanese has been making peace with the right for quite a while. In 2018, in the Gough Whitlam Oration, when it seemed possible that Bill Shorten might be in trouble as Labor leader, he made an early pitch to the right, “Successful Labor Governments collaborate with unions, the business sector and civil society to achieve positive outcomes in the national interest.”

Albanese, who once boasted, “I like fighting Tories. That’s what I do,” had soothing words for the corporate world, “We respect and celebrate the importance of individual enterprise and the efforts and importance of the business community.”

In 2015, at Labor’s national conference, Albanese had opposed turning back asylum boats, “because he himself could not turn back an asylum seeker boat at sea.” By July 2018 he told Sky News that he agreed that the Coalition’s policies “have stopped the boats”. He also rejected calls to put a time limit on offshore detention, and reiterated Labor’s policy that asylum seekers who came by boat would not be allowed to settle in Australia.

In 2013 when there was a contest between Shorten and Albanese for the Labor leadership, Albanese asserted there were no policy differences between then. He was just the candidate with, “more experience and the best able to end divisions.”

Anthony Albanese is not the first Labor Left leader to make peace with the party machine and the system. In recent times, Julia Gillard, Anna Bligh and Peter Garrett have all ditched any left credentials they once had to become loyal servants. Albanese has gone the same way.

“The ALP suffers from the absence of a Left”, so wrote prominent party critic Rodney Cavalier, a one-time NSW Labor government minister, in 2010.

Albanese has done his bit to make sure that nothing’s changed.