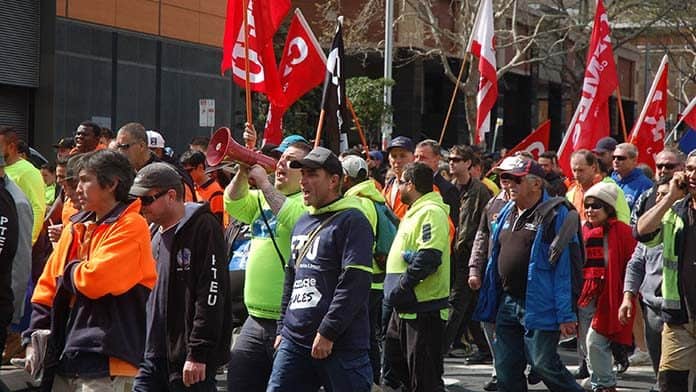 Five thousand striking workers took over the streets of Sydney’s CBD on Thursday 6 September, demanding fairer laws for workers, the abolition of anti-union bodies, and the right to strike.

Hundreds of construction sites were shut down as thousands of workers walked off the job in illegal strike action. They were opposing the Australian Building Construction Commission (ABCC), a union watchdog which persecutes the construction union.

The rally happened on the same day as another horrific workplace accident left a construction worker dead and two others injured in Victoria.

One CFMMEU worker told Solidarity, “The big companies use the ABCC to prevent the union from coming on site and informing the workers about whether they’re being treated fairly and being paid the right money.”

Wharfies from the three terminals at Port Botany shut down the port with a four-hour stoppage. The ETU, the plumbers’ union and the AMWU had strong contingents.

The rally put the heat on the Coalition government, at a time they are weak and divided. New Prime Minister Scott Morrison has threatened to deregister the CFMMEU. Darren Greenfield, NSW secretary of the CFMMEU construction division told a cheering crowd they should, “deregister the banks, deregister the Liberal party.” He said, “This government cannot stand organised labour in this country. [But] they’re on their knees, you can see the rabble they are now. We just have to push ‘em out, and hold the other side to account.”

ACTU President Michele O’Neil argued that: “We are fighting because the system is broken. We have had 30 years of economic growth in Australia, but workers’ wages are going backwards.

This is the fourth time in two years construction workers have walked off the job in Sydney, often joined by the MUA. They are sending a message to the Labor opposition that the CFMMEU expects them to honour their promise to abolish the ABCC when in power.

One construction worker at the rally said, “I’m not confident in any politician at the moment. Marches like this go a long way to keeping them accountable.”

We need more strikes like this, with more unions involved. Another stopwork rally has already been called for 23 October in Sydney, joining unions in Melbourne who will rally on the same day.

But with the Liberals’ loss at the next election likely, there needs to be more pressure on the Labor party to meet the union movement’s demands.

At the ACTU congress in July, National Construction Secretary Dave Noonan distributed a leaflet reminding delegates of the damage inflicted by the previous Labor government: “The Rudd/Gillard government, which the CFMEU construction division helped get elected, gave us IR laws that resulted in million of dollars in fines and our officials and members persecuted for doing their jobs. We as a trade union movement must ensure this never happens again.”

This shows why we need to build pressure on Labor to really Change the Rules at work. Labor has committed to some significant changes but has not indicated it will do anything to reduce restrictions on the right to strike. Yet so far the bulk of the union movement has restricted the Change the Rules campaign to electoral campaigning in marginal seats, simply designed to elect a Labor government.

Maritime Workers took stopwork action under the demand “the right to strike”. The demand was also popular with construction and other workers. The right to strike campaign collected 350 signatures on a petition to scrap the anti-strike provisions from the Fair Work Act in favour of the unrestricted right to strike. The petition also called for the ACTU to organise national stopwork rallies.

Speakers at the rally highlighted the GWC Cranes and Boom cranes strikes, which have been suspended on the basis they are “pattern bargaining” – the union is using a template agreement across multiple sites. So it should! This again highlights just how far the anti-strike laws have gone. We need a clear union-wide campaign against the laws, and to openly defy them.

Between now and the next rally in October delegates across the union movement should pass motions calling on their union to bring people out on stopwork action, or at the least to mobilise large contingents. We need to bring down this government and show Labor we are ready to keep up the fight.