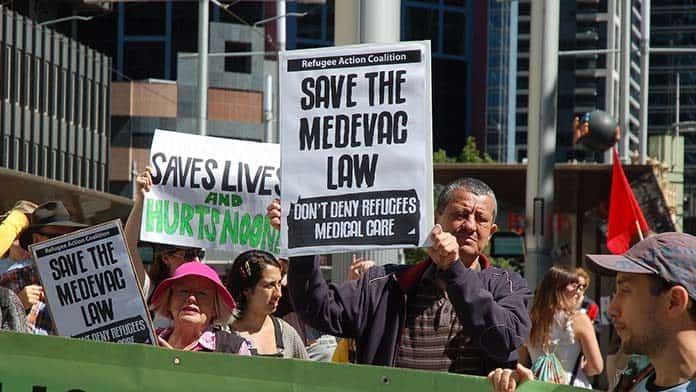 This is a small improvement on the 60 per cent finding of the national February 2019 poll run by the same company. But we can expect more of the government selectively leaking refugees’ confidential details to the media before the final parliamentary sittings of the year begin in the last week of November.

So far, since February, just 160 people have been transferred from Manus and Nauru for medical treatment. Most of those transferred are being held in closed detention, in detention centres and two motels in Brisbane and Melbourne.

For those with mental health problems, closed detention is making their situation worse; for others, detention in Australia means they are still being deprived of medical attention despite being transferred to get it. It’s a particularly twisted Medevac version of Catch-22.

But while the political focus has been on Medevac, the first moves to so-called “community placement” are underway in PNG, as the Australian government tries to further distance itself from its responsibility for refugees’ care. Refugees are being moved out of the Granville Motel, where scores of asylum seekers and refugees have been housed since being transferred from Manus detention, into hotels in residential areas of Port Moresby.

“Community placement” will leave refugees with fewer services as well as being more exposed to danger.

Most significantly, it shows that the government is no closer to providing the safe resettlement for the around 290 people left in PNG (or for the around 270 people on Nauru).

There will be no security at their new housing areas. They will now have to provide food, water, phones, and all necessities for themselves; forcing them to shop. They will be exposed to assault and robbery every time they are forced to leave the hotel.

No transport will be provided to the Pacific International Hospital (PIH), the only place they can get medical treatment. With only two taxi vouchers a month, they will be at risk every time they are forced to use public buses.

With a support allowance of just 200 kina (about A$100) a week, “community placement” will also drive refugees into poverty, and leave many more to become prisoners in their rooms.

New Zealand to the rescue

Meanwhile, Australia’s most prominent and internationally-recognised offshore refugee, Behrouz Boochani, has managed to get to New Zealand on a one-month visa to attend a writers’ festival in Christchurch.

If the New Zealand government had the political will to defy the Australian government, it could have taken refugees from Manus and Nauru years ago. If New Zealand can issue a visa for one Manus refugee, it can grant visas to many others. The demand for New Zealand to take a stand against Australia and help free the refugees will grow.

Behrouz’s arrival in New Zealand will also likely re-open debate about the Australian government’s “lifetime ban bill” and its paranoia that New Zealand will become a back-door for the refugees that Australia expelled to Manus and Nauru.

Anything that breaks through the facade of Australia’s policy is welcome.

More revelations about the conditions in the Bomana detention black hole in PNG have confirmed the rendition-like conditions of a Guantanamo Bay. Asylum seekers are denied visitors, phone access, fans, pens, or books (even playing cards were confiscated), while the starvation rations have seen them lose between 12-15 kilograms in a couple of months.

There are now 43 asylum seekers still being held in the Bomana detention centre in an effort to force them to sign to go back to their home countries.

Rallies in Sydney and Melbourne on Saturday 7 December will take up the government’s onshore war against asylum seekers, calling for permanent, not temporary, protection visas, for family reunion and for an end to the fast-track assessment system.