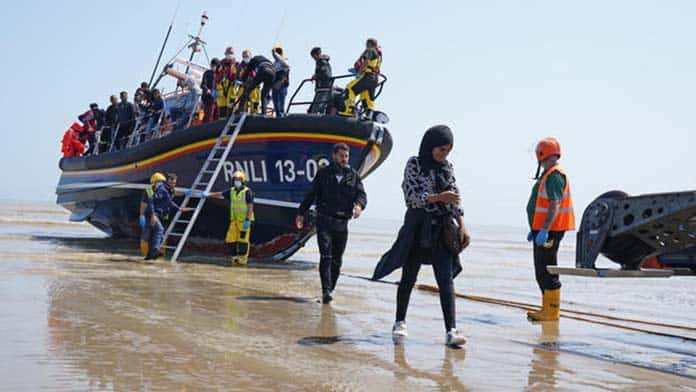 The UK government has adopted brutal Australian-style measures against refugees, planning to exile the majority of asylum-seeker boat arrivals in the UK to Rwanda.

A last-minute intervention by the European Court of Human Rights in mid-June prevented the deportation of the first plane load of asylum-seekers to Rwanda. Despite this setback, the government is still very much committed to the plan.

The asylum-seekers are meant to be processed in Rwanda and, if found to be refugees, settled there. If rejected, they’ll be sent to a “yet-to-be-named third country”. In exchange for accepting the asylum-seekers, Rwanda would receive millions of pounds in development aid.

The British politicians who justify the Rwanda deal are even singing from the same song sheet as Australian politicians—trying to give their anti-refugee policies a humanitarian gloss.

Outgoing UK Prime Minister Boris Johnson said the scheme would “save countless lives” and that it would break the business model of “vile people smugglers”. Johnson, who was fined for organising illegal parties during the COVID lockdowns, even had the hide to accuse the lawyers trying to defend the asylum-seekers of “abetting the work of criminal gangs”.

In 2018, Rwandan security forces shot dead at least 12 refugees from the Democratic Republic of Congo when they protested against a cut to food rations. Even the UK government last year expressed concern about Rwanda to the United Nations for its “continued restrictions to civil and political rights and media freedom”.

The UK is not the only country to have adopted Australia’s model of “deterring” asylum-seekers by exiling them to third countries.

In 2014, Israel began offering rejected asylum-seekers and unlawful migrants $3500 and a plane ticket to either Uganda or Rwanda. The alternative for the asylum-seekers was deportation to their country of origin or jail in Israel. About 20,000 people were either returned home or sent to Rwanda and Uganda.

In 2016, the European Union began paying Turkey billions of dollars to keep refugees from reaching Greece as well as funding the Libyan Coast Guard, which pushes migrant boats bound for Europe back to North Africa. It also helps fund UNHCR processing centres in Niger and Rwanda.

In 2021, Denmark passed a law allowing it to deport refugees and is currently in talks with Rwanda about accepting them.

Supporters of these harsh deterrence policies argue they prevent asylum-seekers from adopting dangerous forms of travel but the reality is it only pushes the problem elsewhere and forces asylum seekers to take even more desperate risks.

In 2011, the Greek government spent $3.3 million fortifying its land border with Turkey with a 4m-high barbed wire fence and thermal cameras to scan the surrounding area. This only pushed asylum seekers to make the more dangerous crossing via the sea between Turkey and Greece, with tragic consequences.

In 2016, after the EU paid Turkey billions to prevent asylum-seekers from crossing by sea, there was a sudden jump in the number of boats trying the much more dangerous crossings between Libya and Italy; Morocco and Spain; and from Turkey to Cyprus.

Governments are using increasingly brutal measures to police their borders.

In June, 37 asylum-seekers were killed trying to enter Melilla, a Spanish enclave in North Africa. Between 600 and 2000 asylum-seekers stormed the highly fortified border. Moroccan security forces, acting in alliance with the Spanish National Police and the Civil Guard, crossed the border and started beating the asylum-seekers back, killing and maiming people in the process.

Meanwhile 53 desperate asylum-seekers suffocated in the back of a trailer in San Antonio, Texas, believed to be the US’s deadliest smuggling episode at its highly fortified southern border.

These deaths are not anomalies. Desperate people are dying in increasing numbers around the world trying to breach increasingly fortified borders. Tough border protection policies don’t save lives, they just stoke racism and division and condemn refugees to die somewhere else. That’s why socialists must oppose them in Australia and everywhere else.