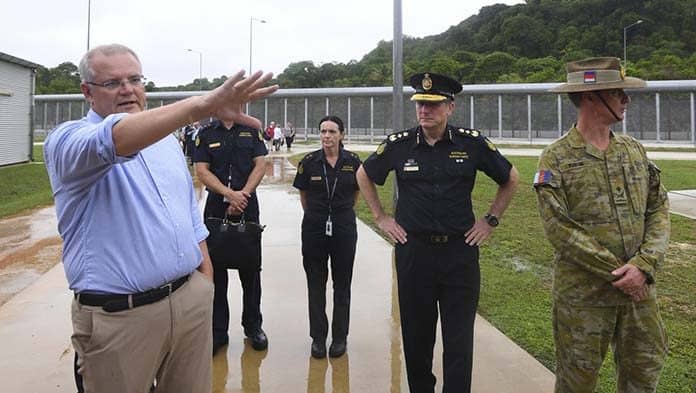 The passing of the Medivac Bill has driven the government into a frenzy of desperation and hate-mongering. Scott Morrison announced the re-opening of Christmas Island and declared himself to be “a brick wall”. But he knows that the Medivac Bill has punched a hole in the wall of offshore detention.

Along with the re-opening of Christmas Island has gone the ugliest display of vilification of asylum seekers yet seen as Morrison presses the panic button to try and win the looming election.

Home Affairs Minister Peter Dutton told 2GB Australians could be thrown off medical waiting lists and “lose their homes” if refugees were transferred to Australia from Manus and Nauru for treatment.

Morrison repeated the lies on Christmas Island saying, “If they are in an operating theatre; that is an operating theatre someone else could be in.” Dutton also warned darkly that medivac refugees could “go on to become Australian citizens”, as if that was a threat.

And we got the usual baseless scaremongering, with the government alleging that murderers, paedophiles, and suspected terrorists would be among those transferred under the Medivac bill.

The vicious outpouring from Morrison and Dutton has been a graphic reminder of why we need to get rid of the Liberals. Their racism and scapegoating runs deep and casts a long shadow over Australian society.

All the indications are that Morrison’s hatemongering is not playing well. A GetUp poll showed 60 per cent of voters support the Medivac Bill. Opinion polls published since Morrison’s scare campaign are still running strongly against the Coalition.

Labor has dismissed Morrison’s re-opening of Christmas Island, with Shorten calling it “a political stunt”.

Since the Bill, transfers from Manus and Nauru have slowed down rather than speeding up. That fact reinforces the reality that legal action won’t end offshore detention. While the Medivac Bill is a blow against offshore detention, it will not end it.

There have once again been calls from Robert Manne (along with Tim Costello, John Menadue, and Frank Brennan) for the refugee movement to accept boat turnbacks and offshore detention as a trade-off for having those marooned on Manus and Nauru transferred to Australia or other third countries.

Morrison simply cannot believe that the refugee-bashing formula that the Liberals have relied on for the last 20 years is not working for them. We can expect more hysteria, more vitriol and more scapegoating as the Liberals desperately hope that more xenophobia will keep them in office.

In 2016, Manne wrote that, “the supporters of asylum seekers need to accept there is no asylum seeker policy with any chance of political acceptance that does not involve the cruelty of turnback and compromise regarding refugees and universal human rights.”

That was not true then. It is even less true now. Things have changed…the years of protest and the mobilisations to get the kids off Nauru has created another tipping point in the campaign.

Far from being a time to surrender to offshore detention, the break in bi-partisan support represented by the Medivac Bill is a very real opening to re-double the demand, on Morrison, but more emphatically directed at an incoming Labor government, to end the cruelty, close Manus and Nauru and bring them here.