From offshore prison to onshore motels: Free the refugees 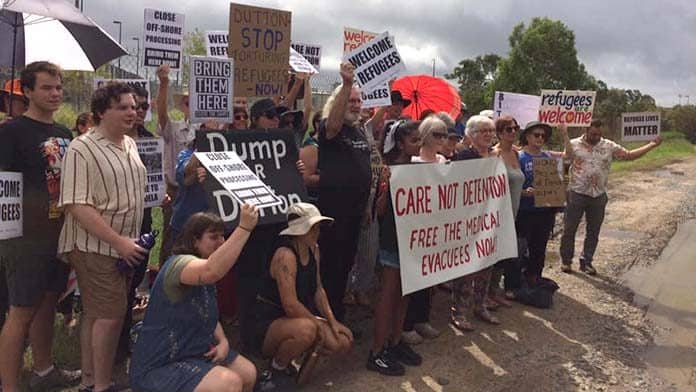 The Medevac legislation was meant to guarantee that two doctors could recommend sick refugees in Nauru or PNG to be transferred for medical treatment.

Yet hundreds of refugees brought to Australia for medical attention before the Medevac legislation was repealed are still being held in closed detention.

In Brisbane, there are around 80 people in the Kangaroo Point Central Hotel and another 70 in the Brisbane Immigration Transit Accommodation (BITA). All have been there for months since being transferred for medical treatment.

In Melbourne, there are 41 in the Melbourne Immigration Transit Accommodation (MITA) and 55 in the Mantra Hotel, in Bell Street, Preston.

Since the Grandmothers for Refugees held a protest at the Mantra Hotel before Christmas, there is growing awareness that refugees brought for medical treatment are being imprisoned; many without getting treatment.

A rally called by the Brisbane Refugee Action Collective on Saturday 8 February brought further attention on the situation for transferred refugees being held in that city.

Much of the media attention has focused on the motel detention of refugees which seems at once to be more confronting, offensive and perverse than a detention centre.

Motels that are usually associated with holidays have become places of torment. It is worse than prison.

There are no high fences, but the outside world is just as unreachable. You can see outside, but the windows can’t be opened and you can’t breathe fresh air.

Many have been transferred with their mental health seriously damaged but are finding that detention in a motel or onshore prison is no different from detention on Manus or Nauru.

People who couldn’t come out of their rooms on Manus and Nauru see their mental health decline even further.

They take their medication but the days get longer. They aren’t coming out of their rooms in Brisbane or Melbourne either.

The only exercise and the only way out of the hotel in Brisbane is to go to the detention centre. Refugees are searched before they get on the bus, and have just one hour at the gym, before they are taken back to the hotel and searched again before going back to their rooms.

Similarly in Melbourne, like something out of Catch-22, the only way that refugees get out of the hotel is to request to be taken to the detention centre.

For some that’s worse. As one refugee told Solidarity, “With the guards, the gates, the bars and electric fences, when I go to the detention centre, I can’t breathe.”

One refugee has been in Mantra for three months but hasn’t yet seen a counsellor, despite his requests. People who need proper treatment for diabetes, heart disease, cataracts, kidney and dental problems aren’t getting treatment in detention either.

Despite the government making a big deal of repealing the Medevac legislation, since then, it has nonetheless transferred around 16 sick refugees from PNG and Nauru to Australia. But it’s a particularly twisted policy that transfers refugees for medical treatment, only to condemn them to onshore detention.

Offshore prisons and onshore detention are twin aspects of the government’s border protection regime—it has to go.

Build these protests: “Let Them Out, Let Them Stay”