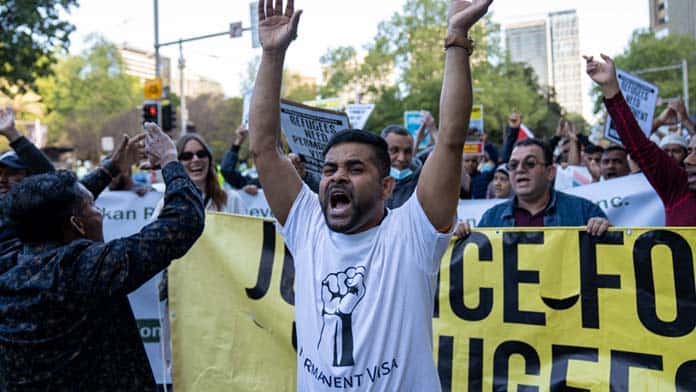 When asked on radio about Labor’s pre-election promise to grant refugee permanent visas, Home Affairs Minister Claire O’Neil tried to avoid the question, “We have not executed on the policy framework essentially to make that happen yet.” When asked why not, O’Neil replied, “It’s a complicated exercise.”

But it’s not complicated. What’s lacking is political will. O’Neil has recently declared that the migration system is broken, telling The Age that, “We’ve ended up with a system where there’s massive visa queues and where the people who actually legitimately want to use the system can’t properly use it.”

She could have been talking about refugee visas—but she wasn’t. O’Neil is concerned that skilled migrants are waiting two years to get an answer from Home Affairs. They should not be waiting so long—but refugees who have been in Australia for ten years are still waiting for Labor to make good on its promise to grant them permanent visas.

And there are refugees in Indonesia who were told they had been accepted by Australia in 2018 but have heard nothing more for almost five years.

No amount of concern about skilled migration or rorts in the migration system can hide the fact that Labor is dragging its feet on its promise to grant permanent visas. Temporary visas have denied proper work and study to thousands of people.

When it suited Labor, it took less than three months for the Biloela Tamil family to be granted permanent visas by Ministerial intervention.

Ministerial intervention could similarly been used to grant permanent visas to all the 31,000 refugees and asylum seekers on Temporary Protection Visas (TPVs), Safe Haven Enterprise Visas, bridging or expired visas (including 2000 babies born in Australia).

Many of those on bridging or expired visas have no income support, while Labor sits on its hands. Two thousand asylum seekers are still waiting for a decision. Despite Labor’s promise to grant permanent visas, refugees are still having to apply for another temporary visa when their TPV expires. Some have been left waiting for months. Refugees on TPVs are still being denied travel rights.

Medevac refugees, and others from Nauru and PNG, most of whom are on six month bridging visas, were outraged and distressed when they recently received a threatening letter from Home Affairs insisting they would never be permanently settled in Australia and giving them 14 days to notify the department of their “third country resettlement plans”.

Every day’s delay in granting permanent visas adds to their misery.

Around 10,000 asylum seekers have had their refugee claims rejected under the under the fast track system introduced by the Morrison government in 2014. There are thousands of Bangladeshis, Iraqis, Iranians, Tamils and Afghans who were rejected by an unfair system and need permanent visas.

Iranians in open defiance of their repressive government are being shot on the streets in cities across Iran, yet Iranian asylum seekers are not treated with the same generosity as the Ukrainians fleeing the war in their country. Nor are Australia’s borders as open to Afghans as they are to Ukrainians.

Labor’s promise on permanent visas for those on TPVs and SHEVs and to scrap the fast track system is almost the only policy difference between Labor and the Coalition. Anthony Albanese’s election night pledge of “No one held back and no one left behind” was never meant to apply to refugees.

To undo the legacy of 20 years of bi-partisan support for mandatory and offshore detention, we need more than to hold Labor to its election promises; that’s just the start.

The refugees and asylum seekers still being held in PNG and Nauru must be brought to Australia. And Morrison’s ban on accepting UNHCR refugees from Indonesia has to go (read more on page 14).

More than 1500 refugees protested in Canberra during the September sitting of the Federal Parliament. Since then, rallies in Sydney and Melbourne have kept up the momentum. Another Canberra Convergence demanding permanent visas for all will see refugees from across Australia demonstrating at parliament house on 29 November.