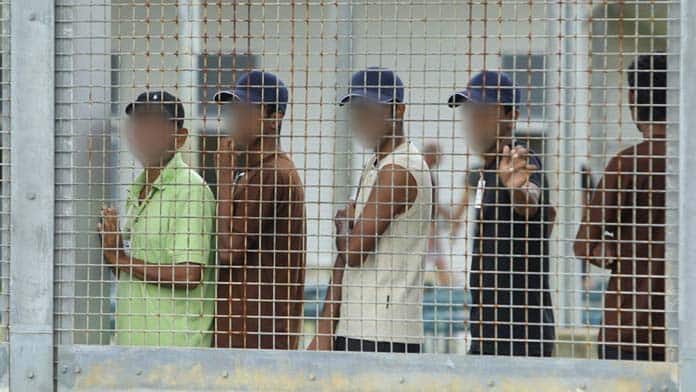 About 100 people rallied outside Brisbane’s detention centre (BITA) on Saturday 15 May calling for freedom for refugees.

The protest came just two days after the government rammed through legislation that dramatically entrenches its powers to indefinitely detain refugees.

The misnamed Migration Amendment (Clarifying International Obligations for Removal) Act 2021 does not clarify the government’s international obligations to refugees at all. In fact, the new amendments allow the Minister to remove protection obligations from refugees whose visas have been cancelled.

Shamefully, Labor maintained its more than 20-year history of bipartisan support for anti-refugee laws by voting with the Coalition to guarantee the government’s power to indefinitely detain refugees and potentially to deport refugees to their home countries.

Labor’s consistent bipartisan support for anti-refugee policies was established in 2001. The then Labor leader, Kim Beazley, after initially saying that Labor would oppose the Howard government’s border protection laws, quickly capitulated to support the Coalition expelling the Tampa refugees.

The legislation included excising islands from Australia’s migration zone in order to prevent asylum seekers making visa applications, and allowing the navy to remove asylum boats from Australian waters. It established the first version of offshore detention in Nauru and PNG.

Labor is boasting that it managed to include two changes to the government’s latest Bill; one to review the legislation in two years’ time and another that provides that any ministerial decision to overturn a refugee determination can be appealed. But these small changes cannot conceal the infamy of Labor’s latest failure to defend refugee rights.

The government’s legislation is designed to pre-empt the High Court’s decision concerning a Syrian refugee (ALJ20) who had been detained after his visa was cancelled in 2014, under section 501 of the Migration Act, following a criminal conviction.

In the Federal Court, a single judge found that ALJ20 was unlawfully detained because the government had made no effort to remove him to any other country and was not going to return him to Syria. In an unprecedented move, the court ordered that he be released.

The government appealed the ALJ20 decision to the High Court, which is yet to hand down its decision. Regardless of any High Court ruling, the government’s new amendments change the Migration Act to ensure that refugees whose visas are cancelled can be indefinitely detained.

Indefinite immigration detention that is separate from, and in addition to, any sentence for a criminal conviction goes against accepted ideas of justice.

The fundamental lack of justice in immigration detention is worse than that. The Minister can refuse to grant a visa to people even when they are found to be refugees, if they fail the character test.

The visa of anyone who is sentenced to a term of imprisonment of 12 months is automatically cancelled. Any person who is convicted of any offence—even trivial ones—while they are in immigration detention also automatically fails the character test.

Ironically anyone who is convicted of escaping the injustice of immigration detention also fails the character test. Since the discovery of an unused tunnel in Yongah Hill detention centre in WA in May, a search warrant alleging property damage has been executed against three people there.

Indefinite detention was enshrined in law by the High Court in the Al-Kateb case in 2004.

The Al-Kateb decision declared immigration detention to be administrative rather than punitive and that detention was lawful as long as there was some process happening or arrangements being made for deportation, even if in fact that person could not be deported and there was no immediate prospect of them being deported.

There have been many cases since Al-Kateb that have confirmed that indefinite detention is Australian law. Although there have been cases in which the High Court or High Court judges have said “at some point” administrative detention can become punitive, somehow that “point” has never arrived.

ALJ20 was the first decision since Al-Kateb that had provided some hope that the courts had finally found there were limits to detention.

The new law will not affect refugees currently in the community. The power to review refugee determinations applies only to refugees whose visas are cancelled.

Neither will the amendments impact directly on the legal cases presently being run for the Medevac refugees who are still in detention.

But the new laws show, yet again, that there is no justice in the courts. It is protest action, not legal action, that is going to free the refugees.