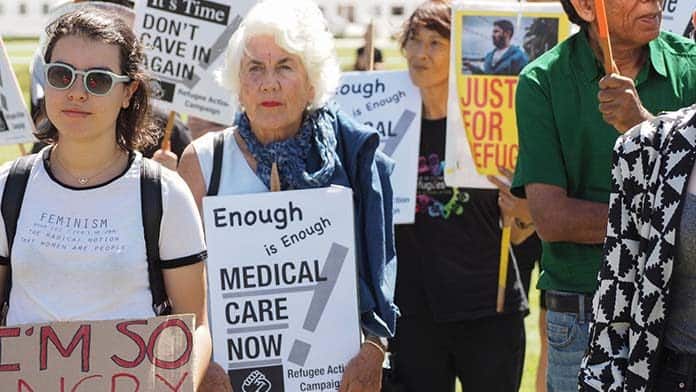 The vote for the Medivac amendments on 12 February won’t end offshore detention, but it is an historic vote. It was a fantastic blow against the Morrison government. And it is one of the very few occasions in the history of offshore detention that Labor has voted against a Coalition government on refugee policy.

A number of things came together to make the result possible. Firstly, the vote was a victory for the years of rallies and protests calling for refugee rights and the closure of Manus and Nauru.

Then in November, Kerryn Phelps’ election in the Wentworth by-election (coming hard on the heels of Labor’s sweeping win in Victoria) showed how much the Liberals were on the nose and that a pro-refugee Federal candidate could be elected. And Morrison kept going down in the polls.

In December, teachers in Brisbane and Melbourne walked off the job calling for an end to offshore detention and to bring the asylum seekers and refugees to Australia. The first vote on the Medivac transfer amendments came in the Senate in December.

As the vote in the House of Representatives approached in February, Morrison began loudly declaring that the Medivac amendments would mean, “the end of offshore processing as we know it”. Around 5000 doctors responded by signing a petition supporting the bill.

Not surprisingly, given Labor’s history of support for offshore detention, a lot of people thought Labor would fall at the last hurdle. Their willingness to make concessions has resulted in changes that give the Immigration Minister greater discretionary powers to refuse medical transfers on serious criminal or security grounds.

The government now says it will do security checks, while slandering refugees as murderers and child abusers. In another telling concession, the bill now also only applies to those currently on Nauru and Manus.

But the bill’s substance, that on the recommendation of two doctors an asylum seeker or refugee must be brought to Australia for needed treatment or assessment, is still in place.

Its defeat made the Coalition the first government in 90 years to lose a vote on legislation in the lower house of parliament—and over refugee policy, of all things, an issue that Morrison was so sure was an electoral winner. The Australian thinks this has given Morrison his Tampa moment.

It hasn’t. The vote shows that protest works, and is a vindication of the long-term strategy of the refugee movement to break Labor’s bi-partisan support for offshore detention. That strategy meant systematically addressing Labor members and supporters, and in particular the union movement, to win them away from the politics of scapegoating refugees to become part of the fight for refuge rights, recognising that workers and refugees have a common enemy.

That strategy does not mean that the movement’s focus has been on how Labor votes in parliament; most of all, it has on building protests and rallies, winning resolutions, publicly challenging the myths and lies.

In the aftermath of the vote, the government has embarked on a rabid anti-refugee campaign, along with a piece of political theatre—grandly announcing the  re-opening of the Christmas Island detention centre because, it says, either new asylum boats will begin arriving from Indonesia or because hundreds of people will start to be transferred from Nauru and Manus. Between now and the election, Morrison will continue to ramp up his border protection scaremongering.

Morrison and cruelty to refugees has suffered a serious blow; yet, offshore detention hasn’t been ended. Labor is still committed to offshore detention, and says that anyone brought to Australia for medical treatment will not be allowed to stay.

But we know how to fight. The 14 April Palm Sunday refugee rallies will both sound Morrison’s death-knell and show the movement’s determination to  fight to finally close Manus and Nauru, and bring all refugees and asylum seekers to stay in Australia—permanently.