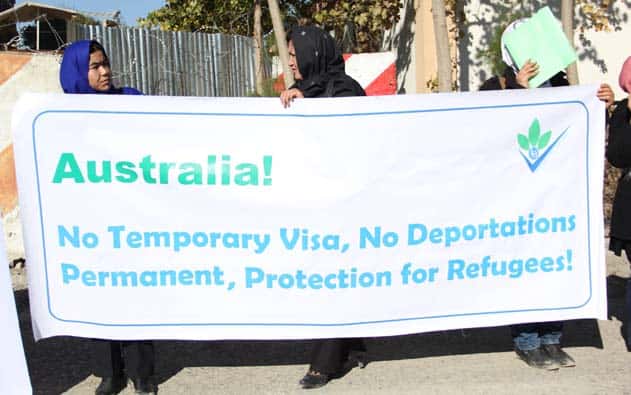 The cracks in Morrison’s offshore processing regime are growing wider, as the Immigration Minister pushes harder for the re-introduction of Temporary Protection Visas (TPVs).

In mid-August, on the eve of meeting Clive Palmer to seek his support for introducing TPVs, Morrison declared that he would release children from mainland detention. Palmer has constantly raised objections to keeping children in detention.

But Morrison’s announcement meant little—most children on the mainland are not in detention centres but in “community detention”, living with their families in suburban houses designated to be “places of detention.”

It clearly didn’t impress Clive either. Less than two weeks later, Morrison proposed that in return for agreeing to TPVs, he would also release the children on Christmas Island and, wait for it, begin processing the tens of thousands of asylum seekers who have been left in limbo on bridging visas in the community. And he would process those in detention who arrived after 19 July 2013 and therefore earmarked for Nauru and Manus Island.

Although it meant nothing for those already on Nauru and Manus, it was a dramatic step. After insisting that no one who arrived after 19 July would ever be settled in Australia, Morrison has backflipped and has now put resettlement in Australia on the table: on temporary visas—for now.

It is one indication of the pressure that is building on the detention regime. The promising thing is that the central elements of the refugee campaign have soundly rejected Morrison’s blackmail. It is simply no step forward to swap one form of insecurity for another.

That stance has since been backed up by the High Court decision that ruled that Morrison’s clever bureaucratic manoeuvre, of issuing safe haven visas to force refugees to accept temporary visas, was invalid. If, as seems likely, Parliament rejects TPVs, it will be a major blow to Morrison.

The contradictions in offshore processing are placing the whole detention regime under pressure. Manus Island has been open over a year. In that time 41 asylum seekers have been determined to be refugees, but none have been released. The PNG Minister has the final say and there are still no resettlement arrangements in place. Meanwhile, no asylum seekers have been transferred to Manus since Reza Barati was killed.

Nauru has said that it will not allow permanent resettlement. A limited number have been released from detention, but that seems to have stalled. The single men found to be refugees are living in Fly Camp in conditions as bad as detention—without enough clean water, food, work or “enough money for soap or toothpaste, or make phone calls”.

The prospect of using Cambodia to voluntarily resettle refugees from Nauru also seems to have run into problems. A delegation from the Immigration Department has been in Cambodia for a month but seems no closer to finalising anything.

Despite the on-going atrocities of the detention regime, Morrison’s concessions show that the campaign is making ground. Hamid’s death has galvanised more opposition to offshore processing.

The Human Rights Commission inquiry into children in detention will report before the end of the year. It is set to raise even more concern about the detention regime. On 14 and 15 October, the High Court will be considering the legality of the kidnapping of the 157 Tamils on the high seas. It is no time to make concessions—we can win permanent visas and bring the end of detention, on, and off shore, that much closer.

Stop the deportations to danger

There is a huge well of nastiness in the Immigration Department. Since the first forced deportation of an asylum seeker to Afghanistan on 26 August, the immigration department has re-detained 14 asylum seekers with a view to forcibly deporting. Among those re-detained are five Iranians and six Afghans, although both countries say they will not accept forced removals.

In the Afghan cases, their rejections as refugees are based on country assessments made in December 2012—almost two years ago. The situation in Afghanistan has seriously deteriorated since then. The Taliban is making daily gains. On 16 September, there were two successful and fatal attacks in Kabul itself. Insurgents have been shelling Hazara areas of Kabul.

Despite the obvious injustice, the Immigration Department makes no re-assessment of its unsafe decisions.

All of those who have been re-detained had been offered six-week visas after spending months on expired bridging visas, and taken into detention either at immigration interviews or with raids on their houses.

Forced removal is a brutal and inhumane process itself—reason enough for it to be opposed.