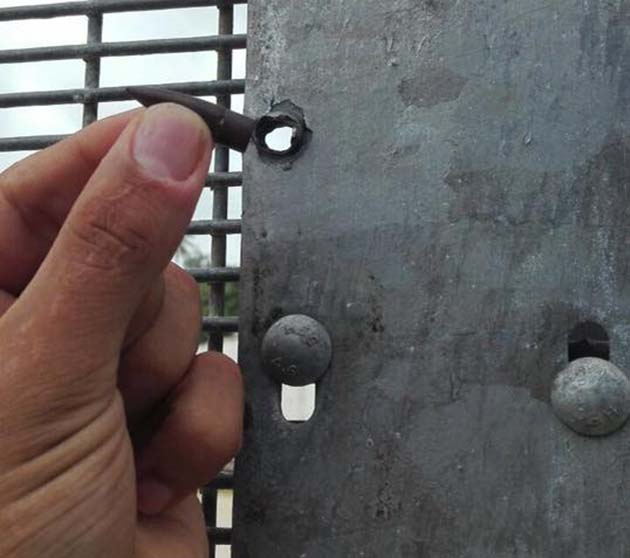 The Good Friday attack on the Manus detention centre has brought renewed calls for its closure.

Both the Refugee Council and the Australian Churches Refugee Task Force issued statements; with the Task Force calling on the government, “To lift the veil of re-traumatisation and fear for refugees and asylum seekers, and to evacuate the camps on Manus and Nauru.”

The government has tried to play down the events of Good Friday. Its fake news bulletin said that shots from a single gun were fired into the air, but the photos of bullet holes throughout the detention centre including accommodation areas tell the real story. And the full scale of the attack has yet to be revealed.

It is now clear that the PNG police were not armed on Good Friday and were not responsible for any of the gunshots. The 100 rounds shot into the detention centre were all fired by navy personnel.

Detention staff fled the compounds or took cover inside as the centre was besieged by navy personnel and the bullets flew.

One Sudanese refugee sustained a head injury when he was hit by rocks in the initial stage of the attack outside the detention centre. But the attack quickly escalated.

In a shameful attempt to deflect attention from the Australian government’s responsibility, Peter Dutton used Sky News to make the disgraceful and unsubstantiated allegation that the attack came after asylum seekers tried to lead a five-year-old boy into the detention centre.

It is a typical Dutton slur—a tried and true Liberal tactic—similar to the way the Coalition government used unsubstantiated (and now refuted) allegations of paedophile rings to justify the Intervention in Aboriginal communities in the Northern Territory.

Reports in the PNG media have outlined what really happened, pointing the finger at “undisciplined soldiers”. The National reports, “The riot also resulted in injuries sustained by a senior PNG Immigration officer and police officers and thousands of kina worth of damage to government properties at the regional processing centre at the Lombrum Naval Base.”

The Manus police commissioner stated that, “…locals in communities who are employed at the detention centre say the actions by soldiers are disgraceful.”

At least three cars, two belonging to PNG Immigration, were badly damaged. And at least one Wilson’s guard was beaten when the mob tried to break through the locked gates of Oscar compound to gain access to the detention centre.

The mob also went on to trash a Wilson’s Security office some distance away; an indication of both fury of the attack and the long-standing tensions between the navy, Wilson security and PNG Immigration and police, created by the detention centre on the navy base.

The Good Friday attack brought back all the fears that have hung over the Manus detention centre since the February 2014 attack that left Reza Barati dead and around 70 others with serious injuries.

The PNG defence force has announced an investigation into the incident. But don’t expect a result any time soon. Only senior navy officers would either have had guns on the day or access to guns to use in the attack.

While two locals were scapegoated and convicted of killing Reza Barati, none of the PNG police who used guns in the 2014 attack on the detention centre has ever been held to account.

As elections loom in PNG, Manus Island is a running sore for the PNG government. Prime Minister Turnbull made a special visit to Port Moresby to stand alongside out-going PNG Prime Minister Peter O’Neill to announce that Manus Island would be closed by “the end of the year.” But they said the same thing a year ago, when the PNG Supreme Court ordered the PNG and Australian governments to close the illegal prison.

Meanwhile fears are intensifying that the US resettlement deal will mean next to nothing on Manus (or Nauru). Despite saying that all refugees who indicated an interest in going to the US would be fingerprinted, the US team left Manus Island after fingerprinting only the 300 who had an initial interview.

Peter Dutton keeps saying that no Manus asylum seekers or refugees will ever come to Australia. He keeps saying it because, as the thousands who marched on Palm Sunday showed, there is a movement that is determined to prove him wrong.

The pressure is building on the government as the end of Ferrovial’s Manus contract approaches in October. The PNG government is incapable and unwilling to resettle refugees.

As the failure of the US deal becomes even more obvious in the weeks ahead the refugee campaign will need to hammer home the message: close Manus and Nauru and bring them all here.