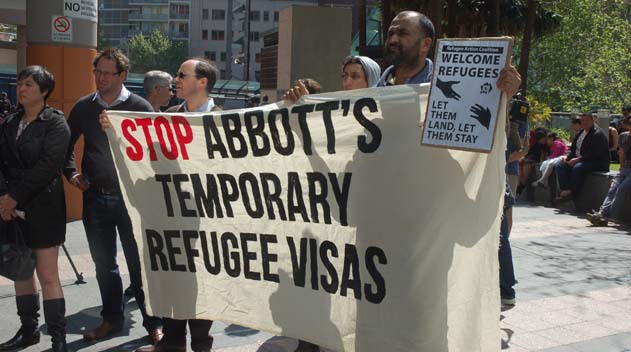 The next day, Morrison flew to Phnom Penh to sign a $40 million “resettlement” deal with the Cambodian government.

Since that announcement, Nauru has been rocked by protests. As Solidarity goes to press, there are nightly protests of hundreds in the family camp, OPC 3, and in the single men’s camp OPC 2. During one particularly angry protest in the family camp, asylum seekers broke through the gates of the detention centre before police and security guards forced them back with batons and shields.

There have been numerous self-harm incidents and suicide attempts. One 15 year-old Iranian girl remains in hospital in Sydney after swallowing washing powder.

People who have been found to be refugees, living near the Yaren settlement on Nauru, are also staging regular demonstrations—and have staged protest marches to the Australian High Commission and to the headquarters of Save the Children.

The protests have at least forced the release of the 29 unaccompanied minors from detention.

The Cambodia deal is a farce. There are already 200 people on Nauru found to be refugees and another 1140 asylum seekers in the detention camps. But, the Cambodian government says that it will only take four or five refugees (or “maybe two or three [initially]”) according to Cambodia’s Minister of Interior. Forty million dollars for four or five refugees! But wait, there’s more…any refugees who voluntarily transfer to Cambodia would have to resettle in a rural area of Cambodia after a year.

But it is the gross injustice of the TPV deal that is driving the Nauru protests. Morrison says that if he gets the TPV legislation through parliament, he will process and resettle all those asylum seekers who arrived after 19 July, 2013 but were not sent to Nauru or Manus Island.

But those who were arbitrarily selected and sent to Nauru and Manus Island—with 200 on Nauru already determined to be refugees—will remain excluded from Australia. Trapped between the farce of Cambodia and the impossibility of Nauru (which will not resettle refugees) the asylum seekers and refugees are being denied a future. There is no alternative but to protest.

Palmer has previously said the price of his support for TPVs was the release of children from detention. But he has settled for a lot less than that. The deal will leave 183 children in the hell-hole of Nauru.

Under the TPV deal, Morrison says he will begin processing the almost 30,000 asylum seekers who have so been denied processing and left destitute in the community. But TPVs mean permanent insecurity. Denied the right to family reunion or to travel, TPV holders will also be permanently separated from their families.

Morrison also proposes a five-year Safe Haven Enterprise Visa (SHEV) as a way of making refugee a source of labour to regional areas. But they are a hoax. A refugee would have to agree to relocation and go three and half years without requiring any income support before they would be eligible to apply for another visa which might allow permanent residency.

The day after the grand announcement, Morrison declared that the chances of any refugee gaining residency through a SHEV was “almost zero”.

Worse, as part of the TPV Bill, Morrison is attempting to rewrite the Migration Act to vastly increase the powers of the Minister and Immigration Department and dramatically limit the rights of asylum seekers and the application of the Refugee Convention to Australian law.

A part of Morrison’s bill will give Immigration officers the power to “screen out” (i.e. refuse to even allow asylum seekers to make an application), while “fast tracking” arrangements will restrict appeal rights for those who are allowed.

But Morrison needs six Senate votes to get the TPV legislation through Parliament—and there are only three Palmer United Party votes. Ricky Muir, the Motoring Enthusiast ally of Palmer has not confirmed which way he will vote.

The campaign needs to keep up the pressure against Morrison and against Temporary Protection Visas. The Human Rights Commission will soon release its report into the conditions of children in detention. Morrison has tried to deflect the allegations of sex-abuse by guards on Nauru by ordering Save the Children workers off the island.

But the contradictions in offshore processing grow day by day. It will become more and more difficult for Morrison to ignore the protests on Nauru. There is nowhere for refugees to go—except Australia.