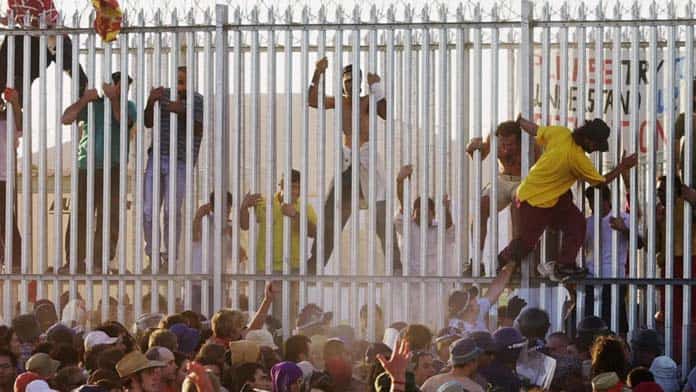 The Woomera breakout saw protesters help refugees escape detention, advancing a movement that won freedom for many others too, writes James Supple

Over Easter 2002, around 1000 activists converged on the notorious Woomera detention centre in the South Australian desert.

No one had planned to help refugees escape. The aim was to defy the law by protesting inside the prohibited zone around the detention centre, used to keep the refugees isolated from public view.

But 50 refugees seized the chance to stage a mass breakout from detention.

Hundreds of activists took buses from Melbourne and Sydney to camp in the desert for three days outside the detention centre, with others travelling by car from as far as Brisbane and Perth. On the first evening most of us arrived, we decided to march towards the detention centre after a request from the refugees to protest outside, while they held their own protest inside.

A barbed wire fence in our way was brought down easily as dozens of people pulled it to the ground. Soon after we realised we could have walked past it a few hundred metres further on.

The real fence to the detention centre was much more imposing, with barbed wire and an outer fence made of steel palisades. Refugees soon made it to the fence line, shouting out to activists outside and reaching their hands through the fences.

“When we got to the fence we could see women and children screaming. The detainees were chanting and shaking the fence with us,” Kristalo Hrysicos from Melbourne’s Refugee Action Collective (RAC) told Socialist Worker at the time.

Then some refugees managed to escape, prising open the fence. Some had to climb along the outside of the fence past police, before falling into the crowd of protesters.

“A 10-year-old boy jumped into our arms. He said, ‘Please Miss, don’t send us back. We’ll die. We are not illegal’,” Kristalo added. “As demonstrators, we could see we had the power to stand our ground. We helped the refugees fight for freedom.”

A tense night followed with the refugees hiding out inside the protest camp. No one had imagined a breakout would succeed, or made plans to assist escapes.

A number of cars set out to try to get escaped refugees away from Woomera. Some were stopped at police roadblocks and sent back to detention, but others managed to make it through.

The government tried to claim that protesters had incited the refugees to escape. But they were more than capable of making their own plans and choices. Many had actually escaped through the back of the detention centre, using the protests elsewhere as a diversion.

Woomera was among the worst of Australia’s remote detention centres. It was literally in the middle of nowhere, almost 500 kilometres north of Adelaide in the central Australian desert. Refugees’ isolation was extreme. For the first six months after its opened, there was not a single telephone detainees could use, even to let families overseas know they were still alive.

The detention camp was opened in 1999 by John Howard’s Liberal government in response to increasing boat arrivals, the majority of them escaping dictatorships in Afghanistan, Iran and Iraq. The government was determined to stir up racism, demonising refugees as “illegals” and making their lives hell to try to stop them coming.

It was drastically overcrowded, built for 400 people but at its height holding 1500 asylum seekers, including hundreds of children. “The food was so bad that after two weeks I had to stop eating it. I had chronic stomach pain,” nurse Moira-Jane Conahan, who worked in the centre and chose to eat with the refugees, explained.

Refugees would wait at least six months for any response to their asylum claims. Many were rejected or screened out on technicalities, spending years locked up there.

Refugees themselves were the first to push the detention issue into the newspapers and TV news with an earlier breakout from the detention centre in June 2000.

Around 400 asylum seekers marched three kilometres into the town of Woomera, not in an attempt to escape but to force attention onto what was happening to them. They stayed in the town for two days, gaining blanket media coverage.

Their protests worked. Within weeks of the breakout, the first visas were granted, meaning some refugees were released from detention. Detention management agreed to distribute phones to representatives of each nationality group, and there were small improvements in conditions.

The Woomera 2002 protest was one of the most successful civil disobedience actions in Australia in recent decades. The dramatic events produced a media frenzy.

But far from isolating the protesters or producing a backlash, the action helped win over public opinion and deepen opposition to the government’s refugee policies.

The fact that the civil disobedience protest grew out of a much wider movement was vital.

By 2002, the refugee rights movement had already been organising for several years. On Palm Sunday that year, the weekend before the Woomera convergence, 20,000 people marched in support of refugees in Melbourne and 8000 in Sydney.

There were already thousands of refugee rights activists and dozens of organisations prepared to take up the arguments in support of refugees, and to defend those involved in the protest.

And the direct action at Woomera in turn helped to strengthen the wider movement. It drew in new activists, inspired by the determination to fight both of the refugees and the activists who travelled from across the country to Woomera.

The effort to physically interfere with the operations of the detention system, and as activists put it to “dismantle the camps”, pointed to the need to raise the political and social cost of the policy to the government. Letter writing, lobbying or private appeals to politicians were not going to end the torture of refugees. The government would have to be forced to act.

But direct action was never going to be a strategy to free all the refugees from detention.

From the beginning, the Refugee Action Collective groups around the country made it a priority to pull the union movement and working class organisations into the campaign.

When John Howard won the 2001 election on the back of the Tampa crisis and 9/11, using the politics of border security and national security, the dangers of his racism became clear.

Until then, the Liberals had widely been expected to lose, with anger at their GST, privatisation, anti-union laws, and the efforts to rule for big business and the rich widespread.

But Howard succeeded in winning a section of working class voters for the Liberals on the basis of racism and division. Even right-wing union leaders, like then head of Unions NSW John Robertson, could see the threat. There was a real danger that the working class would be divided, with some workers accepting the government’s lies that refugees were the real threat to their jobs and living standards.

Union involvement also pointed towards the possibility of strikes and industrial action against the detention system, a form of direct action more powerful than any detention breakout.

The movement may not have been able to achieve the scale of workers’ action as during the Vietnam War or against uranium mining in earlier decades. But the Woomera protest was a key moment in a campaign that won real change over refugees.

A year after the protest, Woomera was closed. Howard’s claim in 2002 that the protest would be “counter-productive” and only, “strengthen the resolve of the Australian people to support even more the Government’s policy”, fell flat.

By 2005, public opinion had turned against Howard. From a position in 2001 where 70 per cent supported his actions in keeping out refugees from the Tampa, there was now majority support for allowing refugees to stay.

The government was forced to make concessions on its mandatory detention policy, releasing children from detention and freeing long-term detainees.

The movement pushed Labor to pledge to scrap Temporary Protection Visas when it won office. In 2008, the new Labor government closed detention on Nauru. Shamefully, Labor reversed itself and re-opened offshore detention on Nauru and Manus Island in 2012.

Since then refugee politics have shifted to the right, with Morrison continuing to boast about his boat turnbacks policy in the current election campaign.

But the movement has kept organising and won important gains. The protest in support of doctors at the Lady Cilento hospital in Brisbane in 2016 stopped the government returning baby Asha to Nauru.

Scott Morrison was forced to bring all the children off Nauru in 2018. And over 1000 refugees who were sent to Manus and Nauru have remained in Australia after arriving for medical treatment.

The fight is not over. But the last 20 years of the campaign for refugee rights have shown that protest works.

The lesson would not be lost on the Woomera escapees. While some were recaptured quickly after the 2002 protest, at least 13 remained free. After several years, supporters won an agreement from the Immigration Department to grant them permanent visas. They were now finally free—and are still living in the community today.