Refugees step up detention protests for freedom from infection risk 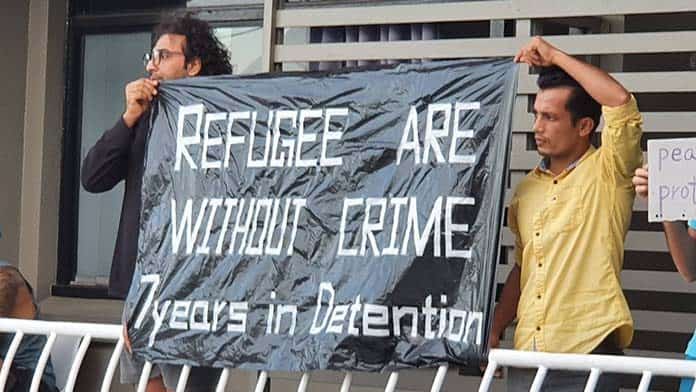 Refugees in detention centres across the country are continuing their resistance, calling for their immediate release amid the threat of COVID-19 infection. Their calls are backed by the advice of over 1100 doctors in a letter to Peter Dutton in early April, warning of dire consequences if the virus were to spread inside detention.

Over 200 immigration detainees began a hunger strike on 9 April in Villawood detention centre in Sydney, along with some others in Brisbane. Their demands covered testing, protective equipment and faster processing of immigration applications.

A rooftop protest began shortly after in Blaxland compound in Villawood, with three detainees holding banners calling for their freedom. The protest continued for five days before armed police entered the compound, ending the protest and transferring all detainees from Blaxland to another compound inside the main detention centre.

Meanwhile, rooftop protest had spread to the Melbourne Immigration Transit Accommodation (MITA) in Melbourne, where a detainee also took to the roof to call for freedom.

Daily protests are also continuing inside the Mantra Hotel in Melbourne and the Kangaroo Point Hotel in Brisbane, “Alternate Places of Detention” where refugees are being held after having being transferred to Australia for medical treatment from Manus and Nauru.

Reports from inside the hotels tell of the impossibility of maintaining social distancing in the cramped conditions with large numbers of staff coming in and out every day, increasing the risk of bringing the virus with them. Many of the detainees already suffer from diabetes, asthma, kidney and heart conditions, making them particularly vulnerable to the virus.

The refugees in Mantra have conducted protests with placards pressed against the windows, and photo actions in the hallways. In Kangaroo Point hotel, which holds around 110 refugees (and is now fenced and totally controlled by Border Force) there are daily protests on the balconies in view of the street.

On 17 April, in defiance of police restrictions on leaving the house, Brisbane refugee supporters walked, jogged and cycled outside Kangaroo Point in solidarity and sight of the refugees protesting on the balcony.

As Solidarity goes to press, another exercise protest outside Kangaroo Point is planned for Friday 24 April.

For many, the current situation is an extension of the cruelty of seven years in detention offshore. A Kangaroo Point refugee speaking via Zoom told refugee supporters, “The government doesn’t care about us. This has been proven for us a long time ago on Manus and Nauru. But now it’s just another level”.

Now held inside their rooms in Mantra for 23 hours a day, the mental and physical health of the refugees deteriorates day by day.

Queensland Premier Annastacia Palaszczuk promised to raise the problems with safety at Kangaroo Point with the federal government, commenting, “I’m not happy with the situation.”

Despite the consistent evidence of the unsafe conditions, Dutton and Morrison maintain the lie that there are, “measures in place in detention facilities in line with advice from the Department of Health.”

The UK, Spain, Belgium, and even the US, have released some people from immigration detention because of terrible risk in the, “unique circumstances of the coronavirus outbreak”.

Over 50,000 people have now signed the Human Rights For All petition calling for the release of immigration detainees. The first court challenge to the government’s detention of a refugee amidst the risk of COVID-19 infection has been lodged in the High Court.

Meanwhile, Trump’s complete ban on migration into the US has all but ended the prospects of US resettlement for those refugees still waiting in Nauru and in Port Moresby, where refugees are now locked down in a state of emergency.

The government’s shameful neglect of people in detention centres reveals the gaping hole in Scott Morrison’s claim that “we are all in this together”. The COVID risk makes it more important that we step up the protests to “Free The Refugees”.