US refugee deal winds up with hundreds still in limbo 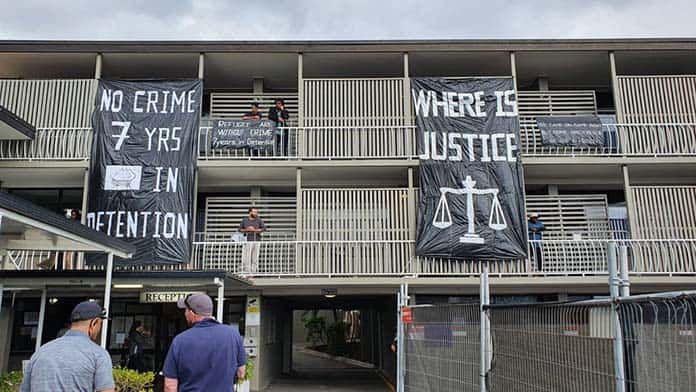 Marc Ablong, Deputy Secretary Resettlement and Cyber Security Home Affairs (yes, you read that correctly), told October’s Senate Estimates hearing that the deal with the US to resettle refugees from Nauru and PNG would finish in March or April 2021.

According to figures presented to the Estimates hearing, by that time, up to 1140 refugees will have been resettled in the United States.

The deal, to resettle up to 1250 refugees, was first negotiated between Malcolm Turnbull and Barack Obama in November 2016, and then confirmed with Trump in February 2017.  It looks like the numbers that will get to the COVID-ridden US will be 100 short of 1250.

The miserable end of the US deal reveals that it was never an acceptable alternative, made even worse when the level of COVID, and the scale of economic collapse, means the US offers far less than a safe or secure future.

But as Solidarity has reported since the deal was first announced, even if the US takes 1250 refugees, hundreds are being left with no future.

With 20 in PNG and about 30 in Nauru waiting to be transferred to the US, there will be 240 people still held offshore (125 in PNG and 115 in Nauru) with no future. Onshore there are 1226 (including those transferred under the Medevac Bill), who are being held in hotel-prisons and detention centres, or are in the community without a permanent visa.

In one final effort to push refugees into returning home, the government is now depriving people of even the most basic support.

Hundreds of the 1226 people here are being driven into destitution on final departure bridging visas, evicting them from houses, cutting off income support and expecting them to find work in the middle of the COVID recession.

Churches, charities and refugee support groups are desperately trying to find housing and support for the hundreds being dumped in the community and deliberately driven into poverty.

They have joined the ranks of the million workers on temporary visas, the thousands of asylum seekers still waiting for their refugee assessments, and thousands more on temporary protection visas who are also being denied the basic welfare support of JobSeeker and JobKeeper payments.  The refugee movement needs to renew its demands for full rights for refugees and asylum seekers onshore.

For the hundreds still in PNG and on Nauru, it still matters that the refugee movement continues to fight to, “bring them here, and let them stay—on permanent visas”.

Stop the spread of the Australian solution

Europe’s leaders have long been attracted by the “Australian Solution”. In 2003, then British Labour Prime Minister, Tony Blair, was explicitly inspired by Australia’s “Pacific Solution” to propose establishing “transit processing centres” outside the borders of the EU.

In 2015, Australia’s just-deposed Liberal Prime Minister, Tony Abbott, urged European leaders to adopt Australia’s brutal border security policies. Since then, as European countries have increasingly slammed their borders shut, their leaders have increasingly adopted elements of the Australian Solution, in particular the interception, turnbacks, and denial of asylum that characterise Operation Sovereign Borders.

Thousands of lives have been lost as Europe’s leaders abandoned rescues or turned back asylum boats on the Mediterranean Sea.

November 2018 saw the first desperate efforts of asylum seekers to reach safety in Britain by crossing the English Channel in makeshift boats. So far in 2020, 7000 asylum seekers have crossed the Channel.

The insidious international export of the “Australian Solution” has given an added urgent dimension for activists in Australia to redouble their efforts to end offshore detention and free the refugees.