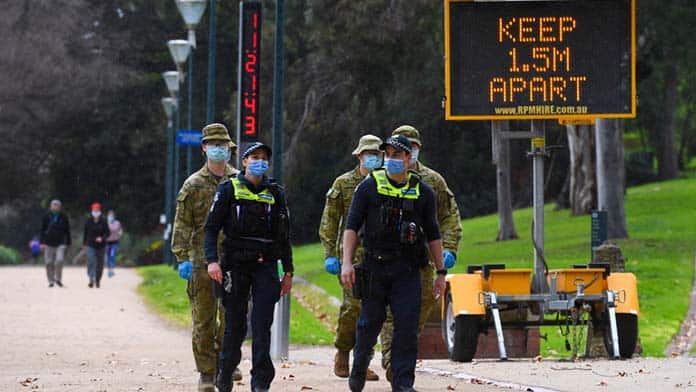 Chip Le Grand’s Lockdown is a fascinating look at the politics of COVID-19, focused on the experience of lockdown in Victoria. It damns health spending cuts and public health failures, the COVID Zero fallacy and the damage caused by lockdowns.

More importantly Le Grand argues that there was a third way between the false polarisation of lockdown and letting the virus rip—the case for public health. It’s an argument that was sorely missing at the time, and welcome even if in hindsight.

Le Grand argues that “The degradation of public health in Victoria is a 30 year problem which began with the election of the Jeff Kennett government in 1992 … the Victorian Health Department was over time reduced to a bureaucratic husk”, as a result of cuts and privatisation.

In January 2020, before the pandemic broke, then Victoria Health Minister Jenny Mikakos tendered a confidential submission to the Victoria government’s Expenditure Review Committee, begging for more funds. It read “in its current state the health protection system does not have the necessary capacity or capabilities to prevent, respond, and protect against current or emerging threats”.

When the federal government announced airport temperature checks for international arrivals, the Victorian Health Department couldn’t spare anyone to do the work.

Le Grand explains “At the start of the pandemic, Victoria’s Health Protection Branch—the division of the health department responsible for containing the spread of infectious diseases—employed one infection control consultant, and she worked part time. It had a total of nine public health officers, all based in the same office, many on single year contracts. NSW by comparison had 15 public heath units—teams of people—spread around the state”.

Le Grand is damning of the hard lockdown of public housing towers. He shows how health advice was tailored to suit the political decision to impose the “unprecedented” lockdown.

Premier Andrews had claimed “you can’t argue with the science. You can’t do anything but follow the best health advice”. But as Le Grande points out “In this instance, public health advice was retrofitted to a political decision already made. Journalists were on their way to the press conference before van Diemen had read the final orders.”

Annaliese van Diemen told the inquiry into the lockdown of the towers that the decision “wasn’t discussed with me”. Le Grand records that she “was given just eighteen minutes in the back of a car to read on her phone the legal advice and human rights implications she was lawfully required to consider” before putting her name to it.

Hotel quarantine, he says, was under-resourced and doomed from the start. Figures show that for one in every 250 COVID cases, the virus leaked out. Premier Andrews rushed to blame staff, but Le Grand paints a different picture:

“Clare Febey one of bureaucrats told the inquiry [into hotel quarantine], that at the start of the pandemic the health department wanted to preserve its stocks of PPE. That’s why people were told they only needed to wear masks when they couldn’t keep their distance from hotel staff.”

Le Grand concludes that when it became clear hotel quarantine had caused Melbourne’s second wave “The only way for Daniel Andrews to politically recover was to take us back down to zero”.

By 2021 Le Grand claims Victoria had developed “world class track and trace, contact and case management systems” and “the data suggests that these systems, and a bit of good luck, rather than lockdowns were crucial factors in controlling the February and May outbreaks”. But the authorities still didn’t trust their own systems and lockdowns continued.

Le Grand’s look at alternatives to lockdown examines the experience of Tokyo. Its “world class health system” allowed every COVID case to be admitted to hospital, quarantined and treated with anti-virals.

Le Grand promotes its “soft restrictions” without fines or mandates, where people were simply encouraged to wear masks, and to go home rather than to bars, as leading to a greater sense of agency amongst the population. As a result, he writes “Tokyo has never entered lockdown, and its per capita death rate from COVID is lower than Victoria’s”.

He also quotes David Nabarro WHO special envoy on COVID-19 who said “We just couldn’t understand why so many countries were seesawing between what was sometimes called freedom and lockdown. That’s not the way. You keep the number of cases down by having really good surveillance, detection and isolation… lockdown… in my judgement, it was a failure of narrative, a failure of policy”.

Le Grand is no radical. Whilst he exposes some of the absurdity and hypocrisy of lockdown rules, he doesn’t touch on their impact on social movements or the unions—including the crackdown on Black Lives Matter, refugee, and union protests. We are still paying the price for the way this demobilised struggle.

He similarly has nothing to say about the kind of fight needed to improve a public health system that is still in crisis and remains under-resourced and starved of funds.

Nonetheless, it is refreshing to have the lie that there was no COVID safe alternative to lockdown demolished. Le Grand concludes “Daniel Andrews kept telling us there was no other way, but there was. You just had to look beyond our closed borders to find it”.