Holding the Man: Life beyond homophobia 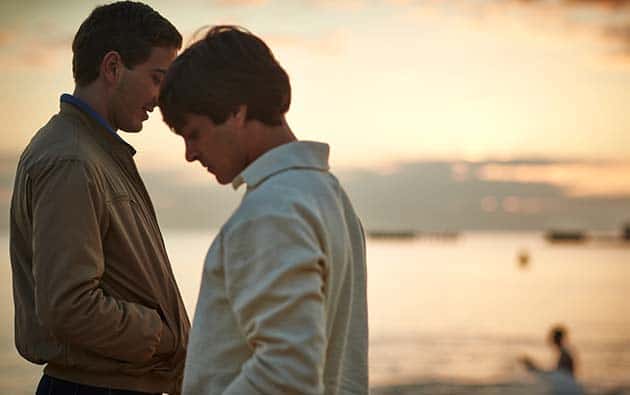 Though Holding the Man is a tragic tale, it’s also a story of hope and pride. The film is based on the play adaptation of Timothy Conigrave’s 1994 memoir of the same name. Holding the Man is not only beautifully filmed, it is incredibly moving.

It’s a love story between two men, Timothy Conigrave and John Caleo, during the 1970s and subsequent AIDS crisis of the 1980s.

The boys meet during high school, where they begin to fall in love, and we follow them over the duration of their 15-year-long relationship.

True to the original memoir, the film doesn’t shy away from Timothy’s desire for sexual openness. Instead of moralising about sexual liberty—as many did in response to AIDS—the film attempts to honestly depict the characters as they move through their relationship and negotiate their different desires.

In this way Holding the Man does not diminish the experience of gay sexuality to stereotypes of promiscuity, but neither does it attempt to reduce gay culture to merely a safe monogamous love story.

Though Holding the Man ultimately focuses on the issue of AIDS and its effects on gay men during the 1980s, their tragic ends do not define the characters, and the film is not just about AIDS and illness. The film moves between different time periods so that we are left with a sense of life rather than death. It shows us the raw reality of two men in love, negotiating the difficulties of sex, longing, recognition and loss.

It’s through Timothy and John’s lives that we experience the struggle of AIDS. We are confronted with the fearful unknown of the new disease as it emerges, and we watch as the characters painfully discover their illness.

The backdrop to the film is the stigma around AIDS that was rife at the time. Even Timothy (before being diagnosed himself) reluctantly shakes hands with a man with AIDS that he encounters.

The film hints at the lack of concern shown for gay men in the early days of the disease. In Australia at the time, the healthcare system did work with the gay organisations and drug users to respond to AIDS in Australia. However, the rhetorical response “bordered on incitement to homophobic violence”, according to historian Graham Willett.

One early bout of hysteria concerned the infection of four babies in Queensland—an event that the Murdoch newspaper The Truth covered with the headline “Die, you deviate!”

1987 also saw the promotion of the infamous “Grim Reaper” advertisement. The haunting image of the Reaper, killing women and children, further reinforced the stigma of AIDS and the gay men with which it was being associated, and we see this clearly reflected in the film.

Homophobia and the family

Coming out at school in the late 1970s, the boys find almost immediate tolerance with their friends at school. Common bonds quickly break down initial homophobic sentiments. However, the two men struggle for acceptance within their families.

Here the film shows the difficulty and pain of finding acceptance within the structure of the nuclear family. Across society, the nuclear family model of “normality” is at the centre of an extremely limited vision of what counts as natural and appropriate sexuality.

When Timothy’s mother finds out that her son is gay, she expresses concern that this will mean, “living a lonely life…A very sad life”. Here homophobic ideas about gay men that are circulating in society are tangled up with her genuine concern about the prejudice he will face.

But as she sees her son thrive, and become happier than ever before, she begins to understand that rather than condemning Timothy to desolation, being proud of one’s sexuality is absolutely vital to his fulfilment in life.

John’s family offers no such reprieve. In one of the most shocking and devastating scenes, Timothy must sit as a “friend” in the crowd at John’s funeral. As Timothy is dispossessed of his partner and their belongings in the wake of death, we see the stark injustice of unequal recognition that gay relationships face.

Hope for the future

Timothy Conigrave died of AIDS just ten days after his memoir was completed. But through Holding the Man the memories of the two lovers live on.

Despite the difficulties of homophobia and living through the AIDS backlash, Timothy and John show us that love can endure.

At the same time their story highlights the deep injustice in the continuing legal discrimination against LGBT partnerships in Australia.

Watching Holding the Man in a context where same sex marriage remains illegal and where films like Gayby Baby are banned from schools, we are reminded that some relationships are still not equally valued.

As we shed tears for their heartbreaking deaths, we are also reminded of the importance of pride and hope, and fighting for a world where gay sexuality is neither policed nor delegitimated, but is instead celebrated.