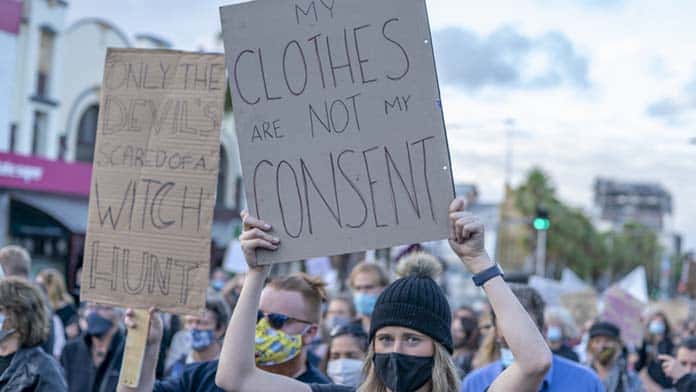 The NSW government has announced plans to reform sexual consent laws that it says will deliver better justice to survivors of sexual assault.

The “affirmative” or “communicative consent” model, which will likely be voted on in September, means that a person does not consent to sexual activity unless they say or do something to communicate consent, and an accused person’s belief in consent won’t be considered reasonable unless they have taken steps to ascertain it.

The changes come out of a NSW Law Reform Commission review whose recommendations were handed down earlier this year.

The review was sparked by the high profile case of Saxon Mullins, who says she was raped at the age of 18 outside a Sydney nightclub by Luke Lazarus, the son of the club’s owner. The case went on for five years, after which the alleged rapist was let off after a judge found that, because Mullins froze during the attack, Lazarus had a “reasonable belief” that she had consented.

The changes are intended to stop this defence from being used, and to shift the onus of proof onto the accused.

The new model has been widely celebrated as a step towards providing greater justice for survivors of sexual assault and there are hopes that it will increase convictions.

A shift away from the victim-blaming that is currently enshrined in NSW law is welcome. No victim of assault should be blamed in court for not responding to or fighting off their assault in the “correct” way.

But the model is unlikely to deliver more justice for survivors of sexual assault.

Similar laws around sexual consent were introduced in Victoria and Tasmania, in 2001 and 2004 respectively. Although rates of reporting of sexual assault increased overall, conviction rates have not.

In Tasmania, whose definition of consent was considered the “gold standard”, according to Monica Otlowski from the University of Tasmania’s Faculty of Law, the introduction of a law intended to establish “whether the victim showed ‘positive’ signs of consent… has not profoundly altered the course of rape trials, nor increased the conviction rates for sexual offences generally”.

In Victoria, defendants have still successfully argued that they believed the victim had consented, even in cases where this belief was not found to be “reasonable”. In one example, a man who raped a woman while she was asleep was let off after claiming that he genuinely believed that she was consenting.

In both jurisdictions, the rapist’s belief that the victim had consented has continued to take precedence over whether consent was actually “given”.

Otlowski argues that this is the result of prevailing sexist ideas, affecting juries and judges, that victims are at fault if they were intoxicated, flirting or froze before or during the assault, for example.

Even the Chairman of the Victorian Law Reform Commission, Tony North, has said that, “the problem with consent is probably not the law.” He argues that the sexism of older judges and barristers in particular, who routinely, “confuse… humiliate… denigrate” victims in court, means that even where consent law appears strong, it rarely results in successful prosecution.

The Victorian and Tasmanian models stipulate that defendants must take steps to ascertain consent. The impact of the proposal in NSW to require positive communication of consent will only be clear once it is tested in court.

Around one in five women in Australia has experienced sexual assault. But while the reporting rate of sexual offences has increased over time, this has not been matched by an increase in the rate of conviction, which has decreased. This trend is reflected in other countries with similar laws, like England and Wales.

Changes in laws around sexual assault can have important symbolic implications. But we cannot rely on a sexist legal system—one overseen by the likes of Christian Porter for years—to deliver justice.

Even where convictions are obtained, perpetrators are sent into jails that do nothing to change their sexist ideas, and survivors rarely have access to adequate support services, whose funding has been cut down to the bone in recent decades.

We need to build a mass movement against sexism that delivers real material changes in women’s lives, demanding proper funding for women’s and domestic and sexual violence services, as well as affordable housing, decent jobs, better wages and free childcare.

Ultimately we will have to get rid of the system that breeds the sexism and sexual violence in the first place.