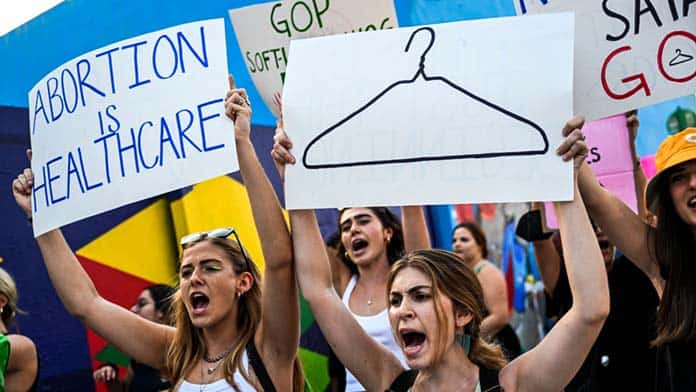 The outcome is the result of 50 years of organising by right-wing activists to change the composition of the Supreme Court.

Donald Trump was able to achieve that by packing the court with anti-abortion conservatives. There’s now a conservative majority that is also threatening other decisions on same-sex marriage and even the right to access contraception.

Roe v Wade guaranteed women the right to an abortion, under the right to privacy implied in the Constitution. Now it will be completely up to individual states to determine abortion law.

Thirteen Republican-run states already had legislation that was immediately triggered when Roe v Wade was overturned. In Texas abortion is now illegal unless the woman’s life is in danger—with no exceptions for rape or incest. Probably half of US states will now make it almost impossible to get an abortion.

The Democratic Party doesn’t have enough votes in the Senate to reinstate Roe v Wade, where the filibuster rule requires 60 votes out of 100. The filibuster could be overturned, but several Democratic Senators oppose this.

Democratic President Joe Biden has also ruled out other ideas such as expanding the Supreme Court or allowing abortion clinics to operate on federal land.

Instead the message coming from Biden and the Democrats is to maintain your rage until the midterm elections in November and vote. But it looks almost impossible that the Democratic Party can win enough seats there.

Most of the left have seen campaigning for the Democrats as the main way forward for abortion rights, instead of building an independent movement to force the issue.

But the Democrats had the chance to legislate to protect abortion rights in 2008 when Barack Obama was President, with a filibuster-proof Senate majority. They refused, saying it wasn’t a “legislative priority”.

There is now widespread organising to help women travel interstate to get abortions or access abortion pills.

But the pro-choice movement can’t be left to just these practical efforts.

The thousands of people across the US who took to the streets following the Supreme Court decision show the possibilities for building a new movement to win back abortion rights.

Recent years have seen not just the US but also Hungary and Poland attempt to ban abortion.

Why are these restrictions on abortion still being pushed? The anti-abortion right think that women’s place is in the home and women’s main role in society is to bear and raise children through the nuclear family.

Capitalism benefits from this unpaid labour raising the next generation of workers. Without it there would be huge costs in childcare that the system would have to meet itself.

But capitalists would also like to draw more women into the workforce, meaning women must have some rights to control their fertility and to decide how many children to have.

This contradiction has meant that abortion becomes a political football. Women’s rights to abortion and control of their bodies is a measure of how women are treated across society.

What does it mean here?

Abortion has been decriminalised in Australia in every state except WA. However, there is a limited period in which women have the right to abortion on request. After the first 16 weeks of pregnancy in Tasmania the woman needs a gynaecologist and a doctor to decide whether or not she can have an abortion. In Victoria that period is 24 weeks, and 22 weeks in Queensland and NSW.

This time limit is unnecessary. And that’s illustrated by the fact that in the ACT there are no time restrictions at all.

Abortion is still not talked about as a normal everyday health procedure.

The vast majority of abortions in Australia rely on private clinics instead of public hospitals. There is a Medicare subsidy, but women still pay out of pocket costs of hundreds of dollars. If you live in remote or regional Australia, sometimes there’s no doctor willing to perform an abortion because there’s a stigma about it. You have to travel to find access.

At the last election in 2019 the Labor Party promised to provide abortions in public hospitals free of charge all across Australia.

They dropped that before the recent election, concluding that it cost them votes due to campaigning by anti-abortion groups.

We need a proper health system that provides abortions in hospitals so that women know that abortion is available. We need free, safe, abortion on demand.

We can take on the right by organising and fighting for abortion rights and taking on the system that says women should remain unequal.

Wave of anger as US Supreme Court to overturn right to...

The United States Supreme Court is set to wind back the clock after a leaked document revealed it plans to overturn the historic Roe v Wade ruling.