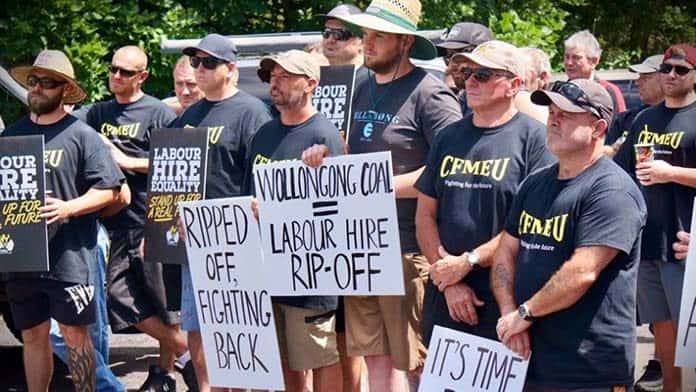 Workers at a coal mine in NSW have won a big victory against casualisation after four days of strike action.

The 70 workers from the Wongawilli mine southwest of Sydney will be switched over from casual roles to fixed-term permanent contracts and won 12 per cent pay increases, moving them from being the lowest earning workers in the region paid $300 a week less than other miners to the highest among labour hire companies.

Through workers “flexing their collective muscle” they were now “now permanent employees on pay and conditions consistent with the area”, the CFMEU’s local divisional vice president Bob Timbs said.

They will also benefit from annual leave, carers’ leave, accident pay and long service leave entitlements—most of which they did not receive before the strike.

The workers at the mine owned by Wollongong Coal have their jobs contracted out through a separate labour hire company. The CFMEU says the tactic is becoming more and more common in the industry.

The workers had initially planned a two week strike, but won what their union called a “spectacular victory” in only four days.

It had told members to prepare to strike “for the long haul” after the labour hire company said it could not afford their claims.

But significantly, Wollongong Coal agreed to step in and “assist [labour hire company] CAS by offering a higher contractual rate to enable them to meet demands”, the company’s secretary Sanjay Sharma said. This shows the power of strike action to win proper pay rises and decent conditions.

The campaign built union membership at the mine from 13 to 80 in less than a year. The two year agreement is the first enterprise agreement the union has won at the site.

The dispute shows how unions can organise to beat casualisation and low pay as well as win decent conditions.

And it proves the power of strike action to shut down production and force bosses to find the money for decent pay.