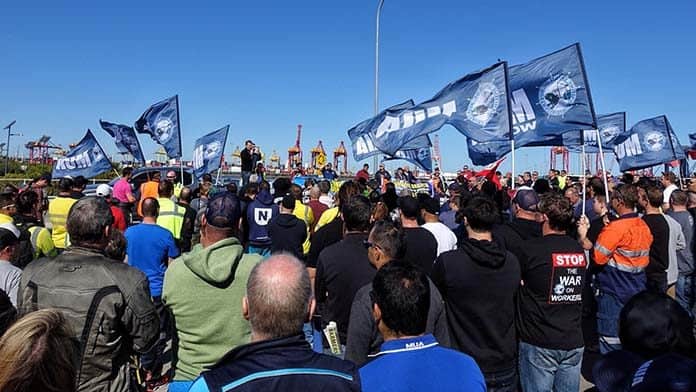 A collision between two machines has left one wharfie still in an induced coma, after the cabin of her 50-tonne shuttle carrier was smashed and she fell eight metres onto the concrete below. The tragedy shocked the workforce, which has pulled together to support everyone involved, and has received messages of solidarity and support from other Hutchison terminals including in Jakarta and Pakistan.

The International Transport Federation (ITF) executive board passed a resolution saying, “This is the latest case in a pattern of serious health and safety incidents that have occurred recently in Hutchison terminals” and that the company “must correct its safety record”.

The callous, cruel and aggressive response from HPA demonstrates their commitment to put uninterrupted corporate profits squarely above the basic right of workers to come home alive. It also demonstrates the crucial importance of strong unions and workplace delegate structures to protect health and safety.

Less than 24 hours after the accident, with the injured worker still in a coma, HPA rostered on the same workers who had witnessed and responded to the crash and demanded they recommence work, including on the shuttle carriers.

Workers and their Health and Safety Representatives immediately raised the obvious safety issues presented by the accident, particularly relating to inadequacies of the traffic management plan, training of drivers and potential engineering faults which leave the cabin vulnerable to severe damage.

Serious concerns with traffic management at HPA have been raised by the Workplace Health and Safety Committee numerous times in the lead up to the accident. Just a few weeks ago, Hutchison workers walked out after a dispute over training practices led to five workers being stood down by Hutchison.

Workers are currently exercising their rights under Workplace Heath and Safety legislation not to participate in unsafe work, and are not driving shuttles until the company meets with workplace representatives and MUA officials to properly address these issues and make changes to ensure they are safe.

But Hutchison is refusing to meet with workers and their union or concede there are any safety issues raised by the accident.

They have consistently refused entry to officials of the Sydney MUA branch—forcing workers to hold meetings with their representatives through a barbed wire fence.

Hutchison have denied all requests for training records, existing traffic management plans and other documents made by the union and safety delegates.

The company continues to roster workers on to operate shuttles, and have sent an intimidating memo—which they have also read aloud on every shift—stating that, “There is no imminent risk to health and safety nor is there any basis for anyone making such a claim… It is our expectation that you will promptly resume duties.” They then docked the pay of workers.

On the evening Tuesday 24 April, Hutchison filed an application in the Fair Work Commission (FWC) seeking orders to force all work to resume, despite not having made one single change to the conditions on the ground.

Wharfies continue to present for all shifts, and have made themselves available for all other work, such as working on the ships. But instead the company has sent Hutchison ships to the neighbouring Patrick terminal.

The workforce awaits the outcome of the FWC hearing, but until changes are implemented on the ground the risks to workers safety remain as stark as they did on the day of the accident.

There is nothing fair about the “Fair Work” Commission. Although the workers are operating well within the laws of the Workplace Health and Safety Act, this does not guarantee a favourable ruling. The history of the FWC proves this, such as their recent ruling against an entirely legal bargaining strike of Sydney train workers, citing a loophole for “economic damage”.

The Fair Work Act, rotten as it is, does give workers the right to action, “based on reasonable concern of the employees about an imminent risk to his or her health or safety.” But there is a total lack of enforcement and a culture of corporate intimidation. Instead of the company being hauled before the courts for their many breaches of the Health and Safety Act, it is the union that has to defend the rights of its members to work safely without coercion.

The best way to exert this pressure would be through industrial action, both at the Hutchison and Patrick terminals, by refusing to work Hutchison ships until safety is improved. This shows why we need the right to strike to protect ourselves from employers who put profits before the safety of workers.