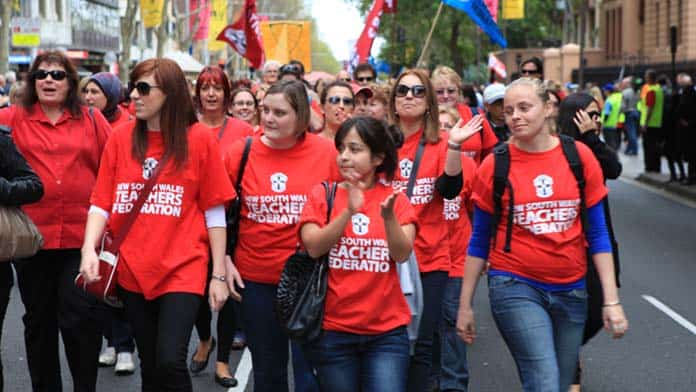 Public school teachers in NSW are gearing up for a major campaign to improve wages and conditions.

Negotiations between the NSW Teachers Federation (NSWTF) and the NSW Department of Education for a new award will begin in October.

The union’s demands are yet to be finalised as the Sydney lockdown saw the NSWTF Annual Conference postponed. However, they are likely to include a 5 per cent a year salary increase and a two-hour reduction in face-to-face teaching per week.

These demands are based upon the recommendations of the “Gallop Inquiry” commissioned by the union last year.

This confirmed what we have known for some time: teachers are overworked and underpaid.

The report details the many ways in which teachers’ work has increased in scale and complexity. Teachers are dealing with more administration, constant policy and curriculum changes, changes in technology, standardised testing, more reporting, and data collection.

The inquiry references the 2018 “Understanding Work in Schools” report which found classroom teachers are on average working 55 hours per week.

The Gallop Report also notes that: “There has been no wage increase to reflect the change in the nature of teachers’ work, nor any acknowledgement of the time taken by the average teacher to complete the extensive new requirements”.

Teachers are in a strong bargaining position. The experience of remote learning during lockdown in 2020 saw a new-found appreciation for teachers from parents juggling working from home and child supervision.

The NSW education system is also facing an acute teacher shortage. The Rorris Report – also commissioned by the NSWTF – found that by 2031, NSW public schools will require between 11,000 and 13,700 additional full-time teachers.

The Government is trying to resolve this with expensive, poorly thought-out programs that fast-track teacher qualifications. But better pay and conditions are needed to attract and retain teachers.

Close to 2500 new members have joined the union this year on the back of short stopwork actions at schools across the state over the staff shortages.

The more than 60 actions show the anger and frustration at teacher shortages, and the thirst for action over the poor pay and conditions we face.

We should not accept any trade-offs that lessen the gains. Already members of the union executive are flagging that any increase in the number of permanent staff at schools would be paired with a relief system that would see existing permanent staff (rather than casual replacements) cover the classes of staff away on leave. This would quickly see any additional release from face-to-face teaching filled with more work, and put pressure on teachers to avoid sick leave.

The union executive is also recommending we campaign for an additional 2.5 per cent per year salary increase on top of the 5 per cent to, “further recognise and reward experience and leadership”.

This is a divisive move. Schools already have a large middle management layer with teachers in positions that divide the workforce. Creating more of these privileged categories will only worsen the problem.

Promotions based on ticking boxes and producing proof of meeting ambiguous standards will only create more paperwork and hierarchies within our schools and undermine workforce collaboration.

It is also important that decisions about the progress in negotiations involve the broader membership. The current 2020-2021 award was voted up at stop-work meetings in late 2019 where many members only saw what they were expected to vote on as they walked into the meeting. Details on resolving an issue with pay affecting teachers commencing prior to 2016 had not even been finalised.

Teachers are fighting for more than just salaries and classroom release time.

The Department has been seeking greater control in setting teachers’ goals in the annual “performance and development process”. In the new K-2 syllabus, there will be additional testing and a focus on phonics, rather than trusting teachers to know their students and the strategies that work.

And in 2017, less than 60 per cent of NSW government school teachers were employed on a permanent basis.

We need to use our industrial strength to fight back on all these fronts.

Paramedics and nurses in NSW are currently also taking industrial action. Under pressure, the NSW government has lifted the public sector pay cap to 2.5 per cent (after reducing it during COVID). The pay cap has stifled wages for too long. A united fight between the public sector unions could see us smash this arbitrary and unfair figure.

TAFE teachers (also covered by NSWTF) are also currently in negotiations for a new agreement. They are on even less pay than school teachers and were awarded only a 0.3 per cent pay increase in their last agreement.

Teachers across schools and TAFEs need united industrial action to ensure a lifting of pay and conditions for both sectors. We need to ensure that all our demands are met with no trade-offs. All out until we win!