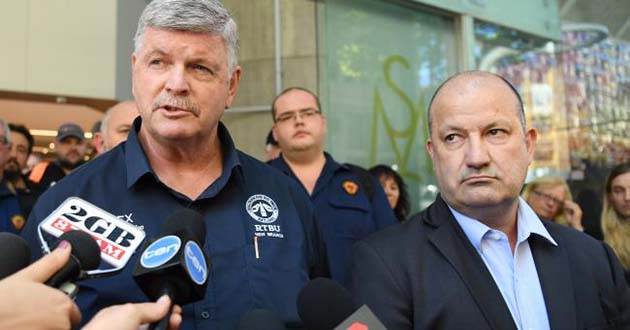 The industrial relations laws are broken and rigged against workers. The Fair Work decision to declare the 24-hour strike on 29 January as well as overtime bans illegal effectively means that rail workers have lost the right to strike.

The only way forward is to vote down the government’s offer. Rail workers should vote to strike on 8 March, when the ban runs out, call depot meetings to build support and prepare to break the laws.

A rail strike would have union and community support. Every person that uses public transport knows that it has been neglected by the NSW government.

Strikes in defiance of the Fair Work Commission would be met with enthusiastic support from unionists and the community.

Workers everywhere recognise that wages are stagnant and that Fair Work is a pro-employer straitjacket. One Channel 7 poll last week showed there was overwhelming public support for a train strike—72 per cent of 17,954 votes were in favour of the strike.

Unionists across the board would be prepared to show active support with the right lead. Last week, the NTEU NSW issued a statement supporting the rail workers and mobilised its members to leaflet stations in support of the rail workers in the lead up to 29 January. Defiant action would inspire such solidarity on a much wider scale.

ACTU Secretary Sally McManus has said that it’s right to break bad laws. Those words need to be turned into action. The ACTU is set to lead a “Change the Rules” campaign. That campaign needs to start now.

Mass meetings of workers in NSW (and other states) could back rail workers’ action. A strike campaign could break the 2.5 per cent NSW public sector wage cap and set the scene for a union fightback that really could change the rules.

So far, the RTBU officials have said they will follow the rules. But a strong stand at today’s meeting can turn that around.

The union should not be afraid of fines.

Last year construction unions defied the law, staging two unlawful nation-wide stopwork rallies against the federal Liberal government’s introduction of the anti-union Australian Building and Construction Commission (ABCC). They have not been fined.

There have been times when unions like the CFMEU and the MUA have had to pay fines. But that’s a small price to pay when union principles and our conditions are at stake.

A threat to all workers

The decision by Fair Work’s Jonathan Hamberger is a threat to all workers. Hitting the bosses’ profits is the whole point of going on strike and taking industrial action. If causing “economic damage” is enough to make a strike illegal, then industrial action by any union is potentially against the law.

RTBU National Secretary Bob Nanva said, “The [Fair Work] decision marks the death of the right to strike in Australia.” But we can fight back.

Today the inevitably sub-standard offer from Transport Minister Andrew Constance must be rejected. The fight must continue.

The government refused to negotiate until strike action was announced. Without the threat of strikes in defiance of Fair Work the government will not take rail workers’ demands seriously. Workers are being pushed to the limit to keep the rail network running and deserve decent pay, reliable rosters, workable timetables and consultation on changes.

Take back the right to strike

Unless unions are prepared to defy the law, the bosses will keep using the courts to prevent strike action. Without the right to strike, the RTBU has no real bargaining power and there will not be a decent agreement.

It will only be a union industrial campaign that can break the shackles of the Fair Work Act and win back the right to strike. This can start with rail delegates rejecting Constance’s offer and voting for meetings to prepare further action in every depot.

All unions are threatened by this Fair Work decision. We can’t wait for the next Labor government to “change the rules”. We need to fight now.

Vote to the reject the offer, call another strike, and call on Unions NSW and the ACTU to back rail workers’ action.