Shorten and the AWU: The best friends Abbott and the bosses ever had 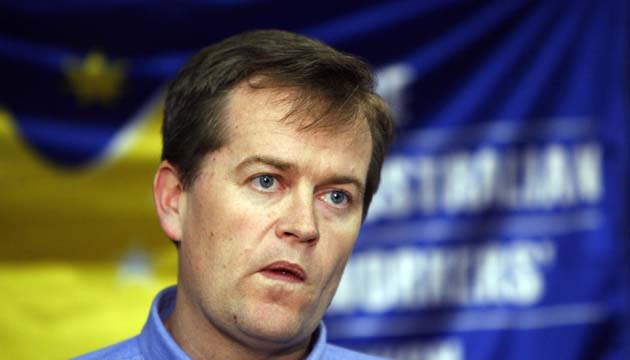 Listening to Tony Abbott criticise Bill Shorten for union deals that “ripped off the workers” almost made me choke on my corn flakes. Tony Abbott has dedicated his life to attacking workers and is totally indifferent to the conditions people work under, once saying, “bad bosses…do more good than harm”.

As the Industrial Relations Minister in the Howard government he opposed every submission by the Australian Council of Trade Unions (ACTU) to raise the wages of the low paid.

In 2001 he established the Cole Royal Commission into the building industry. It cost $65 million and resulted in no prosecutions but still led to new laws that further restricted unions and treated construction workers as second class citizens.

The current Royal Commission into Trade Unions is just more of the same union bashing agenda. This shouldn’t, however, stop us from criticising the dodgy deals exposed and rotten model of unionism at the Australian Workers Union (AWU) that unpin them.

Bill Shorten was Victorian Secretary of the AWU from 1998 to 2006 and National Secretary from 2001 to 2007, when he resigned to run for parliament.

AWU officials, including Shorten, have been caught out accepting hundreds of thousands of dollars from employers, in return for pliable workplace agreements and a moderate union that keeps the industrial peace. This money is primarily used to inflate the union’s membership which then gives AWU leaders more power inside the Labor Party to preselect candidates and to influence policy.

The number of delegates each affiliated union gets at ALP conferences depends on its size.

Over the decades the AWU has used its strength to boost dozens of its former leaders into parliament.

The AWU has always been renowned for doing dodgy deals that undercut other unions, but what has been revealed in recent months is just how low they can stoop.

The most revealing deal was with the large cleaning company Cleanevent that employed thousands of casuals to clean up after big sporting events, signed by Shorten’s successor in the Victorian branch in 2010.

Thanks to the AWU, Cleanevent was legally able to employ casual cleaners working after hours on weekends on $18.14 an hour, when under the Award rate they were entitled to $50.17 an hour.

Workers that move from the Award to Enterprise Bargaining Agreements (EBAs) are meant to be “better off overall”, but this didn’t protect the Cleanevent workers because AWU officials never challenged the agreement.

In return for this sweetheart deal the company handed over the names of their employees (without their knowledge) and $75,000 every year for their union membership fees. Company emails showed they were saving $2 million a year in wages and having this exclusive deal boosted the company’s value.

After signing the agreement the company began paying the AWU just over $100,000 a year for the next three years. The payments to the AWU were recorded as being for training, research and for conferences, but there is no evidence that these services were ever delivered.

The project finished five months before schedule and the Institute of Public Affairs estimates the company benefited by about $100 million. Tony Shepherd, a former Business Council of Australia president and who was the chairman of the EastLink Tollway project was full of praise for the deal saying it was a “great agreement” and that they got a “lot more flexibility regarding rostering”.

The list of dodgy deals goes on. The Huntsman Group paid the AWU tens of thousands of dollars to keep a long-time AWU delegate employed, whose job was “stopping trouble” as the company restructured and closed a plant.

Winslow Construction paid hundreds of thousands of dollars for union membership fees disguised as payments for training. Winslow’s founder, Dino Strano, wanted to keep the CFMEU at bay and told the commission this deal gave his firm “a certain degree of stability”. Unibilt, a labour hire company, while negotiating an EBA with the AWU, was also paying the $40,000 wage bill for Lance Wilson, who was working on Bill Shorten’s election campaign.

While it is common for firms to deduct union fees from workers’ wages and then pass the money over to the union, in lots of cases, firms were paying the AWU fees without deducting from workers’ wages. This just looks like they were buying influence.

Bill Shorten has defended his role at the AWU by saying he was “a modern union leader” who strove for “cooperation in the workplace” by “making sure both employers and employees could get the best”.

Unfortunately this model of unionism, where unions and employers work cooperatively to manage affairs, is neither modern nor confined to just the AWU.

The Shop, Distributive and Allied Employees’ Association (SDA) recently concluded a cosy deal with supermarket giant Coles that reduces weekend penalty rates and allows Coles to cut its wages bill by $20 million a year. The SDA actually pays both Coles and Woolworths $5 million a year to help it collect membership fees, which are then used to maintain SDA influence inside the Labor Party.

These cooperative ideas also underpinned the Prices and Incomes Accords that the ACTU struck with the Hawke and Keating governments in the 1980s, which saw unions working with business to essentially restructure the economy along neo-liberal lines.

Within Labor circles the Prices and Incomes Accords are still seen as a success, even though real wages were cut and became tied to productivity trade-offs. Union membership collapsed along with the union movement’s combativity.

Not surprisingly Bill Kelty, the former ACTU secretary who negotiated the Accords, has come out strongly defending Shorten saying he was, “brave and flexible when the country needed brave and flexible union officials”.

Martin Ferguson, too, who was ACTU president from 1990-96 and later became a Labor politician, defended Shorten, saying the deal struck with Thiess John Holland was an example of “what the Hawke and Keating governments achieved”.

Unions working with business to further the “national interest”, or the interests of Australian capitalism, is central to Labor’s politics. But it is important to understand that these ideas have a social base. They are an expression of the mediating role the trade union bureaucracy plays within capitalism.

Unions arose as the collective resistance of workers to the ravages of capitalism. As they’ve become successful and stable organisations working within the system, they have thrown up full-time bureaucracies.

While many of these full-timers have their roots in the working class, their class position changes when they start working full-time for a union. Their income no longer relies on what they can extract from the employer, but on the income and resources of the union.

They are now a cut above the workers they represent and have a privileged role within capitalism as full-time negotiators mediating between capital and labour.

They prefer negotiations and consultation to class confrontation, and the Labor Party emerged as their tool to press for their interests within parliament. Its leaders have therefore adopted similar aims of management within capitalism.

It was the trade union bureaucracy that formed the Labor Party and today continues to fund it and retain the decisive influence over policy and pre-selection.

Right from the Labor Party’s inception in the 1890s, the AWU been a key prop of the organisation, and helped impose a pragmatic, right-wing outlook. The AWU was a strong supporter of policies like White Australia and arbitration.

In Labor’s early years it used its sprawling rural membership, including workers in occupations like shearing, to win rural seats through cultivating a conservative electoral support base. In some places, particularly Queensland, where at times it had a third of the state’s total union membership, it single-handedly dominated the Labor Party for decades.

The AWU remains a key player in the party’s dominant Right faction. Its role as kingmaker in knifing Kevin Rudd to install Julia Gillard as Prime Minister in 2010 was only the most recent example of a history of ruthless efforts to make and unmake party leaders.

It is tempting to blame all the problems in Labor and the union movement on the Right faction of the ALP. While there is no doubt these unions have set a very low standard, we need to recognise the Left unions are not immune from this bureaucratic collaborationist tendency.

The Prices and Incomes Accords with the Hawke and Keating governments would have been impossible without the support of the more militant left-wing unions.

The Left politicians, too, share with the Right faction the idea that business and unions can work together constructively. Leading left MP Anthony Albanese said he saw nothing wrong with the EastLink Tollway deal commenting, “it’s about enterprise bargaining where employers negotiate with employees, I believe there’s a common interest”.

This cooperative model of unionism is an obstacle to rebuilding the sort of fighting organisations we need. The AWU’s shenanigans have given Abbott a free kick, which he will use to pressure the Senate into passing the anti-union legislation he has waiting on the books.

Rather than a “modern” class collaborationist model of unionism, which has failed workers and just lays the basis for the Liberals to attack further, we need to get back to the politics of class struggle, by mobilising rank-and-file members, who have no interest in cosy deals.