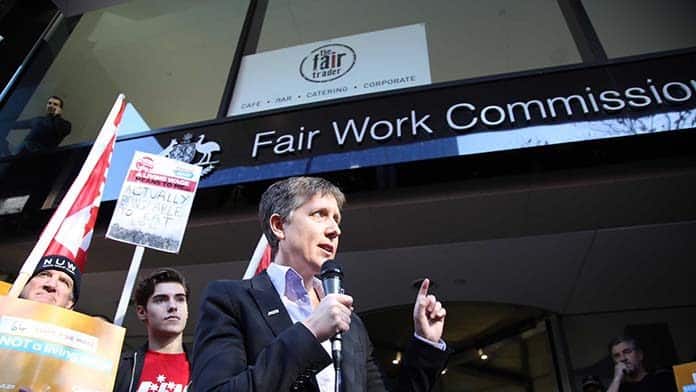 “Our movement’s most important achievements were won by breaking unjust laws, because it has nearly always been illegal to take strike action”, writes ACTU Secretary Sally McManus in her new book.

On Fairness is a celebration of the true history of our union movement, which built itself by breaking laws, standing in solidarity, and challenging state repression.

It is a short pamphlet, and very accessible—every trade unionist should read it.

McManus argues to embrace the rebellious spirit of trade unionism: “timidity comes at a cost far greater than a bit of external consternation.” From early British trade unionists who swore secret allegiances, to the 1976 general strike which saved Medicare, much that is celebrated today was illegal in its time.

This is the attitude the union movement needs to effectively challenge rising inequality, corporate tax avoidance, and insecure work.

On Fairness lambasts the lie of trickle-down economics. In Australia, CEOs earn 78 times the average wage. Seven hundred and thirty-two of the biggest companies pay zero tax. And enterprises such as 7-Eleven have business models based on systematic wage-theft.

The Liberals peddle the line that corporate tax cuts will create jobs—but a secret Business Council of Australia survey showed 80 per cent of businesses would use tax cuts to increase shareholders’ dividends or capital investment, not wages.

Corporations claim to stand for the free market and against regulatory “red tape”. But they want even more red tape to tie up unions. The laws in Australia are already some of the most restrictive in the developed world. McManus explains the penalties for workers’ walking out to protest the actions of employers: “They’d face the loss of a minimum of four hours’ pay—even for a 10-minute stoppage—as well as fines of up to $12,600 each. In addition, their union would face fines of up to $35,000…”

McManus also argues that pandering to media fearmongering is a dead-end.

Recalling her interview on 7.30, when ABC journalist Leigh Sales challenged her to distance herself from the “lawbreaking” CFMEU, she writes, “When union leaders are asked whether we support the ‘rule of law’, we’re being challenged to abandon and condemn our own history… Disavowing the right to strike weakens every worker’s rightful claim to it.” She is absolutely right.

On Fairness offers a powerful diagnosis of the problems, but it stops short of spelling out the logical conclusion—that we need an industrial campaign to overturn the restrictive anti-strike laws. And we need a movement to support unions in breaking the laws, because Labor is not going to change the rules that most fundamentally limit the right to strike.

McManus puts the blame for curtailing our right to strike on John Howard’s Coalition government, but it was the Labor Party in the 1990s, under Paul Keating, that did the most to restrict this right.

Keating introduced enterprise bargaining in 1993. Instead of industry awards, workers in different enterprises would have to bargain separately, and industrial action would only be allowed during a specified “protected period”. There were harsh penalties for striking in an “unprotected” period, which meant almost all the time.

The background to this was the introduction of the “Accord” by Labor Prime Minister Bob Hawke, who convinced unions to restrict industrial action, and peg wage rises to productivity gains in return for a better “social wage”. But this simply tied our hands.

After the Hawke-Keating years, John Howard introduced the Workplace Relations Act, which increased the penalty for unlawful strikes, and introduced individual contracts.

In 2005, the union movement fought back with the “Your Rights at Work” campaign.

But the ACTU leadership settled for a watered down WorkChoices-Lite under the Rudd Labor government, enshrined in the 2009 Fair Work Act. Today it is these laws, and the enterprise bargaining system, that hold back workers at every turn. It would have been illegal for workers to strike when the Fair Work Commission cut penalty rates, because it was not “protected action”.

The union movement must not make the same mistake of relying on a Labor government yet again.

On Fairness dodges this hard question and the past mistakes of the ACTU. But the willingness of the unions to fight under a future Labor government is going to be critical.

The final chapter of On Fairness is still to be written.

It is up to rank-and-file unionists to make sure the Change the Rules campaign does not end with the election, but with the emergence of a fighting union movement true to its historic roots of resistance, willing to defy bad laws. Real fairness will only be won when we have the unrestricted right to strike.