University of Melbourne casuals are fighting back 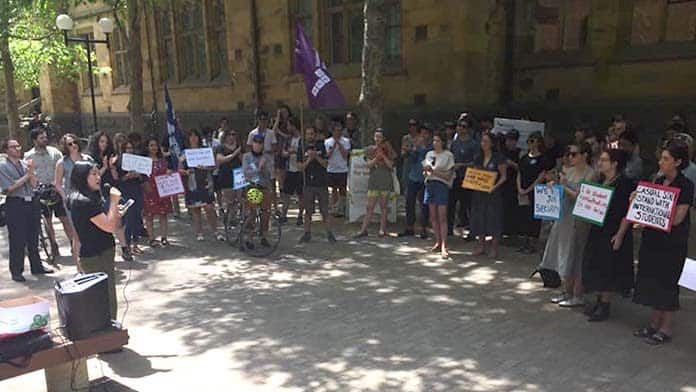 Casuals at the University of Melbourne have delivered a blow to the myth that casual workers are too insecure and vulnerable to stand up and fight for their rights. Over 2019 NTEU activists have organised casuals across the university into a rank and file “casuals network”.  This network has campaigned on a number of issues. Earlier this year, after the university refused to reimburse casual tutors for the compulsory working with children check, we rallied and won reimbursement in every school and faulty.

Since then we have fought for an end to the illegal “piece rate” payment for marking and for casual tutors to be paid for lecture attendance.

On 1 November over 100 casual staff members, alongside students and permanent staff, rallied outside the Dean of the Faulty of Arts’ office. We intended to deliver a petition signed by over 300 staff calling for casual tutors to be paid for lecture attendance.

When the Dean refused to meet us and receive the petition, we decided to take it to him. Staff members filed into the Dean’s office chanting “union power” and occupied the office for several hours. When he continued to refuse to meet with us we rallied again the following Friday. Once more over 100 permanent and casual staff marched across the campus.

Following these two successful actions University HR declared a “dispute” and called a meeting with the NTEU branch. NTEU casuals refused to be demobilised by negotiations behind closed doors, and over the two days around 40 casuals attended these meetings to tell their stories of exploitation and insecurity and to hold the university to account.

HR is on the ropes but casuals will keep fighting until we have a clear victory. Tutors must be paid for attending lectures and the marking piece rate must be abolished.

At the University of Melbourne insecure workers make up the majority of the workforce (74 per cent). But the casuals network has shown that it is insecure workers themselves, organised and fighting alongside permanent staff, who have the power and potential to win an end to casualisation and the permanent jobs we desperately need.