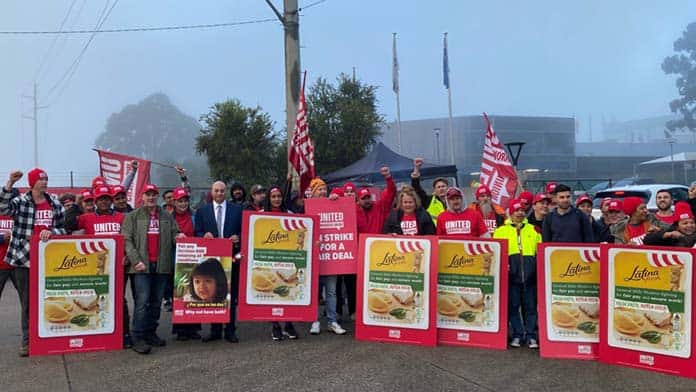 Workers at General Mills in Sydney have been on strike for 11 days, fighting efforts to attack their conditions and demanding a decent pay rise.

The company has offered the 100 workers, members of the United Workers Union (UWU), just a 1.5 per cent pay rise and wants to change their rosters. Currently normal working hours are Monday to Friday—but the company wants changes in order to reduce access to overtime pay as part of a new enterprise agreement. It also wants to lock in lower rates of redundancy for new workers. Workers want a 3 per cent pay increase and to keep the current roster and conditions.

General Mills is a multinational food manufacturer, which in Australia produces brands including Old El Paso and Latina Fresh. Globally the company made over $26 billion last year.

Workers have maintained a 24-hour a day picket at the factory in Rooty Hill. On Friday they voted to continue the strike after management refused to budge.

Supporters gathered for a family day on the picket line on Saturday.

“How did they get that? Because of you working extra shifts when you were asked to, making sure the plant kept running when it needed to. So it’s no unreasonable to have a reasonable pay rise.”

The company recorded a $4.5 billion global increase in sales and a 27 per cent increase in operating profits through the COVID crisis, while refusing meal allowances to workers doing overtime, and maintaining staff of up to 15 years on casual contracts.

This is the first strike for a long time at the factory—one worker told Solidarity there had not been a strike in the 20 years he had worked there.

UWU organiser Tom Sayers told the workers on Saturday, “After one week we’re standing strong, we’re getting stronger, and the company’s starting to realise what your power is.”

The factory is continuing to operate, with a small number of labour hire casuals still working despite the strike. A hard picket that shut the factory down altogether could force the company to accept workers’ demands within days—but would mean defying anti-strike laws.

Workers everywhere are facing years without a pay rise as bosses take advantage of the COVID crisis to hold down wages. The workers at General Mills are showing how to fight to push up pay and improve conditions. They deserve everyone’s support.