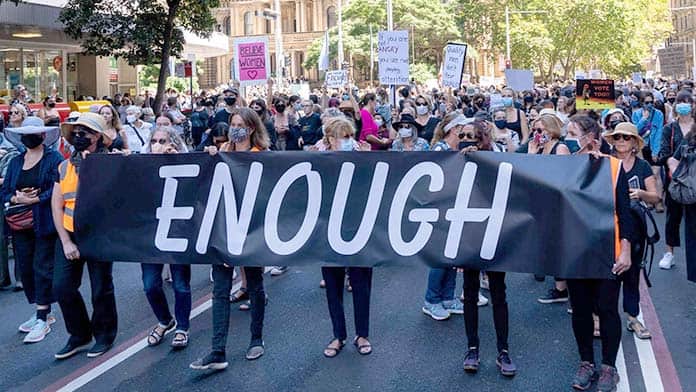 The slew of rape allegations, harassment and cover-ups of assault within the Liberal Party, coupled with a viral petition about the high rates of sexual assault by Sydney private school boys, have exposed the cesspools of sexism and misogyny within the Australian ruling class.

Scott Morrison and the government have refused to take the rape allegations seriously and tried to brush them aside.

The alleged rape of former Liberal staffer, Brittany Higgins, in 2019, was covered up and treated as a political inconvenience by Defence Minister Linda Reynolds and others in the Liberal Party from the outset. Higgins withdrew her initial complaint to police, saying she was made to choose between that and keeping her job in politics.

Then an accusation emerged about the brutal rape of a 16-year-old girl in 1988 by Attorney-General Christian Porter, then 17. The woman involved committed suicide last year. Porter, who is from a powerful, wealthy WA family, has a long history of repulsive, misogynistic behaviour, including sexual harassment of female colleagues and students.

But, after the case was closed by NSW Police, Morrison has ruled out an independent investigation and said he had not even read the woman’s statement.

When claims of Porter’s sexism and inappropriate behaviour with female staff were first aired in a Four Corners investigation in November 2020, along with the culture of sexism and harassment in parliament house, Morrison’s response was that “the breakdown of a family” was what broke his heart the most.

Meanwhile, a petition launched by a former private high school student, Chanel Contos, about the extraordinary rates of sexual assault by male students from some of Sydney’s most elite private schools, including Cranbrook and Scots College, has generated thousands of responses from current and former female students, including 500 allegations of assault.

It is clear that misogyny is endemic within the Australian ruling class and amongst their born-to-rule offspring. The sense of entitlement amongst the elite, to oppress and exploit those beneath them appears to extend to women and girls’ bodies as well.

Both Christian Porter and Linda Reynolds should be forced to step down, along with Morrison himself. Porter’s well-documented history of sexism and his calculated attempts to avoid any investigation are reason enough to sack him.

There needs to be an independent inquiry into the allegation against him. Anything short of this sends a message that these despicable actions are acceptable. The elite private schools that breed sexual abusers should also be stripped of the obscene amounts of government funding they receive.

However, the calls for greater levels of consent education in schools will do little to stop the scourge of harassment and assault amongst teenagers. In fact, many of the schools in question already have had significant consent training modules in place for years.

And having more women in parliament—or in the Coalition cabinet—will not keep women safe. Instead of helping Brittany Higgins to get help and seek justice, Linda Reynolds instead called her a “lying cow” in front of her staff. Female Liberal MPs have also been just as happy as their male counterparts to pass legislation that will make life more difficult for ordinary women in Australia, like cutting JobSeeker or defunding domestic violence (DV) services.

The sexist ruling class figures that have recently come under the spotlight sit atop and manage a system that breeds sexism, and relies on the oppression of women to function.

Sexist ideas are pushed from the top of society and saturate the media and advertising, painting women and girls as sexual objects, or as naturally submissive or nurturing. This helps justify the role that women are forced to play shouldering the main burden of childcare and looking after families.

The Liberals used the marriage equality plebiscite to push all kinds of transphobic and homophobic ideas in defence of “family values”, with hypocrites like Christian Porter and Barnaby Joyce amongst the worst offenders. Scott Morrison continued this with his attack on LGBTQI education in schools as the work of “gender whisperers”. In 2019 he told an International Women’s Day event that women shouldn’t advance at the expense of men.

Women are also far more likely to be in casual, part time and insecure employment, and the gender pay gap continues to hover around 14 per cent. The Australian tax system makes it harder for women to return to work full-time after having a baby, and childcare costs on average more than $100 per day. This income discrepancy means that many women are economically reliant on their male partners, and are often unable to escape violent relationships. And for those in insecure work, pushing back against harassment or assault in the workplace is extremely difficult.

The defunding and privatisation of services like childcare, healthcare, aged and disability care in recent decades has meant that families, and particularly women, have had to absorb the load. The Coalition’s constant attacks on public services since 2013 have made life increasingly difficult for ordinary women in Australia.

The Covid-19 pandemic and economic recession have exacerbated all of this enormously, with the consequences of both disproportionately affecting women. During lockdown, parents, and particularly women, saw a massive increase in hours spent doing housework and caring for and educating children and vulnerable family members as schools and public services closed.

Women have also been far more likely to lose their jobs or hours of work in the recession, and the combined pressure of lockdowns and economic suffering has seen a significant increase in the rates of DV. During the first “wave” of Covid-19 in Australia, DV support agencies reported a 10 per cent increase in urgent requests for assistance. Before the pandemic, 150 women were already being turned away from shelters every day due to lack of space.

In 2020, government measures like free childcare, the doubling of JobSeeker and the introduction of JobKeeper provided some temporary relief for women and families. But these have now been all but torn away, leaving some of the poorest women even more vulnerable to abuse. This will be compounded by the recent closure of the Family Court – a closure overseen by none other than Christian Porter.

Getting rid of Porter and Reynolds will be important in pushing back against the sexism at the top of society. But any fight against sexism will need to tackle the material realities that leave women vulnerable to assault and harassment. We will need to fight to double the JobSeeker rate permanently, properly fund 1800RESPECT and domestic violence services, stop the Omnibus Bill that strips away casual workers’ rights, and reverse the cuts and privatisation of public services.

The sexist ideas in the heads of ordinary people, including men and boys, are not set in stone. Society’s sexism has been fought by mass movements many times before in Australian history, from united fights for equal pay to the fight for public childcare. Working class men also have an interest in fighting the Liberals’ attacks on public services, unions and wages.

There is a desperate need to build a united fight against sexism, one that includes people of all genders, and to get rid of the sexist Morrison government. But ultimately, we will also have to get rid of the system that breeds the sexism in the first place.