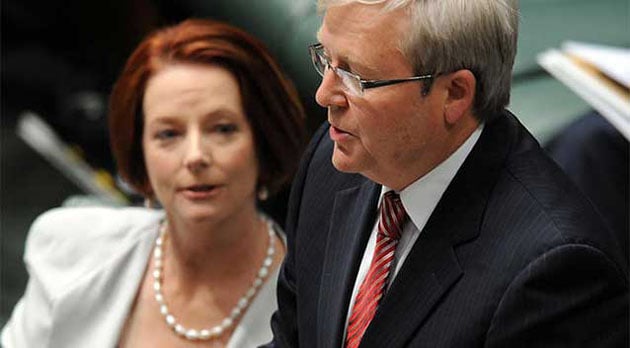 The ABC’s The Killing Season explains nothing, yet exposes everything, about what is wrong with Labor today. Produced by 7.30 journalist Sarah Ferguson, it is pitched as a “three-part examination of the forces that shaped Labor during the Kevin Rudd / Julia Gillard leadership years”. Complete with sensationalist re-enactments and a chilling soundtrack, it makes for intriguing viewing.

And yet the critical question, posed by Alan Milburn in the final scene, is left hanging: “how is it possible that you win an election in November 2007, on the scale that you do, with the goodwill that you have, with the permission that you are gifted by the public, and you manage to lose all that … within just six years?”

We might find a clue to the answer in the questioner himself. Milburn, an adviser for the ALP’s 2010 and 2013 campaigns, served in the cabinet of former British Labour Prime Minister Tony Blair. Blair is
notorious for reorienting British Labour to embrace “Third Way” neo-liberal ideology of cuts, fees, markets, and surpluses, and has become a role model for “modernising” social democratic parties.

Rudd, cast as a Labor “outsider” and foreigner to the unions, embodies all that is detestable about modern Labor. Labor’s electoral success in 2007 is put down to the role of aspirational, conservative,
nice-guy Kevin ’07. Growing discontent with Howard, and the anti-Howard union campaign against WorkChoices barely rates a mention.

According to his former Press Secretary Lachlan Harris, Rudd’s “core insight” was, “forget about being the destroyer of Howard, he had to be the son of Howard. It was effectively to organise an orderly transition from Howard to Howard’s successor—and his name was Kevin Rudd—and it was brilliant”.

The episode goes on:

But to win, Labor still had to convince voters they could manage the economy…
Rudd: “I am an economic conservative.”
Rudd’s economic masterstroke came on the eve of the election…
Rudd: “This sort of reckless spending must stop.”
Cut to Bruce Hawker (adviser to Rudd): “I think at this moment, the Australian public said, ‘actually I think we could make him Prime Minister’.”

So, according to the apparatchiks, Labor’s election win had little to do with Rudd’s promises to tear up WorkChoices, get troops out of Iraq, abolish TPVs for refugees, close Nauru, or sign the Kyoto protocol. For them, it was his fiscal conservatism, the absolute commitment to responsibly manage capitalism, that was decisive.

Rudd’s downfall is equally poorly explained. The narrative is that Rudd’s aims were noble, but that he “lost control”: the GFC forced him to drop the aim of budget surpluses; he looked weak on border security; he was too ambitious on climate at Copenhagen and tied his own fortunes to a failed international summit; he did not negotiate with mining bosses before launching a super-profits mining tax; and his apology to the Stolen Generations was historic, but could not save him.

But this fundamentally mis-characterises every single one of these policies.

The truth is that Rudd’s stimulus package was perceived as a waste because overnight he flushed billions away on ill-conceived projects: school halls instead of teachers, pink batts instead of renewable energy, pocket-money instead of long-term jobs. On climate, Rudd wanted ordinary people to pay more by imposing a carbon market mechanism—and then he suddenly ditched the whole idea and abandoned the “greatest moral challenge of our generation”.

He abandoned any principled stand on refugees too, putting in a phone call to Indonesia to intercept boats of asylum seekers. On the mining tax he withered in the face of the mining bosses campaign, and refused to mobilise unionists to defend the policy, trying instead to pitch the tax as good for business. The Stolen Generations apology, a widely welcomed symbol of justice long overdue, proved to be entirely tokenistic as Rudd remained committed to rolling out the NT Intervention.

In short, Rudd was an enormous disappointment, a grubby careerist who continued Labor’s trajectory to the right. He worked closely with business groups, and he left most of WorkChoices in place.
Climate change above all exposed he was all rhetoric. The CPRS—which was negotiated with former Liberal leader Malcolm Turnbull—failed to get through the Senate twice. This was partly because The Greens, quite rightly, refused to support a scheme with such weak targets and so much in corporate handouts. Anxious rumblings grew inside parliamentary Labor to abandon the scheme. Rudd caved into the power brokers—and paid dearly for it. The polls plummeted in response to
Rudd’s spinelessness. Newspoll figures show Labor lost one million votes in a fortnight.

Now the sharpening of knives in backrooms began in earnest. The party, according to Labor Senator Mark Bishop, had developed a, “single minded focus on Newspoll and Nielsen and Fairfax”. Labor’s expert right-wing hacks—notably Mark Arbib and Sam Dastyari, as well as Bill Shorten—started working the phones. The only conclusion drawn from poor polling was that Labor was too left-wing.

That is why Gillard, upon taking office, took Labor further to the right. She re-introduced offshore processing, invited mining bosses into her office and watered down the tax, trying to revive Labor’s initiative over climate action by taxing ordinary people.

Rudd’s egotistic, self-interested performance as foreign minister does not explain the popular contempt for Gillard. Nor are Gillard’s failures to be explained by the “long shadow” of the leadership coup. Her misogyny speech, and her funding for disability services through the NDIS were popular among Labor supporters. The NDIS was too little, too late, with too many concessions to the market and privatisation. The misogyny speech was hypocrisy: at the same time Gillard cut single-parent payments and maintained the attack on Aboriginal women with the BasicsCard.

That Rudd and Gillard, not to mention current frontbenchers Burke, Albanese, Macklin and others, would collaborate to dredge up this pitiful past for national television shows they are more concerned to defend their shameful legacies than they are to beat back Abbott. Their personal interests still come before defending the interests of the poor and working class.

The Labor leadership have learned nothing from this sorry episode. They may be marginally ahead in the polls, but they risk giving that away as they trail Abbott’s fear-mongering on boats, border security and budget repair. Bill Shorten, along with left figures Albanese and Plibersek, are playing the same games that saw Labor lose so dramatically to Abbott in 2013.

More than ever they are completely lost on the big question: what does Labor stand for? Nobody is quite sure. But if Labor leaders have learned nothing from their failed years in office it is critical that we do. It is going to be up to us—unionists, activists, socialists, Greens and Labor’s rank-and-file—to deal the fatal blow to Abbott and push back the neo-liberal offensive.