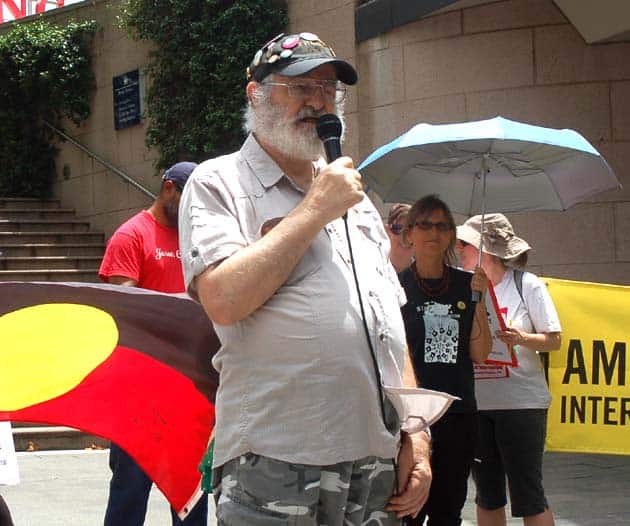 It is with deep sadness that Solidarity has learnt of the passing of Uncle Ray Jackson overnight. The news is a serious blow to the movement for Aboriginal freedom and to the struggle for socialism.

No one embodied determination and devotion to the struggle for justice more fully than Wiradjuri warrior Ray Jackson. Every waking moment, even through his final years when he constantly battled ill health, Ray was organising, writing and agitating for change, most often in his capacity as President of the Indigenous Social Justice Association. Ray was on call 24 hours a day for Aboriginal people being persecuted by police or so-called “child protection”, housing or other racist government agencies. He was constantly planning the next protest march, the next conference, the next media release in the fight against the systematic abuse of his people. His role will be irreplaceable.

Ray was stolen from his family during the Second World War, a fact worth remembering during the current frenzy of Anzac nationalism. In 1943 his father was killed fighting in New Guinea. Ray recalled, “His death led to me being taken from my Aboriginal mother. No War Widows’ Pension for her, just the taking of her children due solely to her Aboriginality. Such was the thanks for his contribution.”

Like so many of the Stolen Generations, his forcible removal meant Ray lost all contact with his Aboriginal family. In recent years, Ray played a crucial role in helping to establish the Grandmothers Against Removals, a network of families fighting the epidemic of Aboriginal child removal still gripping the country today.

Ray was special in terms of his commitment to the socialist transformation of society, and had been a member of the Socialist Alliance and Freedom Socialist Party. He deeply understood the connections between capitalism’s attempts to destroy Aboriginal communities and the way it wages unending war, destroys the environment and exploits working people everywhere. While racist Australian politicians beat the drums of fear about Muslim immigration and lock up asylum seekers, Uncle Ray organised a series of ceremonies to present Aboriginal passports to refugees. Among the recipients were the family of Hamid Kehazaei, the asylum seeker killed as a result of medical negligence on Manus Island last year.

Uncle Ray argued that Aboriginal people were “the first socialists” and believed deeply that a society based on collective decision making, peaceful co-existence and respect for the land were essential features of Aboriginal society. He was convinced a world without bosses or oppression was possible if workers and oppressed peoples grew strong enough to rid the world of capitalism. He gave his life to this struggle.

Much of Ray’s day to day activism focussed on winning justice for Black deaths in custody and stopping the ongoing, systematic murder of Aboriginal people at the hands of police. I worked closely with Ray on a number of cases and always marvelled at how he made sure every excruciating detail was understood and every police assertion was challenged. He fought to make sure that families of deaths in custody victims had all the support they needed—from independent forensic experts, to the best available legal counsel, to an angry crowd willing to march on the police station.

This tireless work was acknowledged in 2013 when the French Government awarded a Human Rights Laureate award to the Indigenous Social Justice Association. Many of the families championed by Uncle Ray are yet to win justice, including the family of TJ Hickey. The struggle to ensure that inquest is re-opened is just one of many that will need to be carried on with Ray’s spirit guiding us forward.

His work against police brutality was not restricted to Aboriginal deaths, with Ray insisting that the links constantly be made with the role police play in enforcing racism and class divisions across society. One of many fights he took up was justice for Roberto Curti, the Brazilian student tasered to death by NSW Police in 2012. He took every opportunity to challenge the corrupt practice of “police investigating police”.

Recently 2000 people marched in Sydney against Aboriginal community closures. Uncle Ray played a crucial role in initiating this protest and making sure that the march finished at the Redfern Aboriginal Tent Embassy, drawing the links between the atrocity of forced closures taking place in remote areas and fight to rebuild Aboriginal community housing at the Block. Ray was advertised to speak at the rally, but couldn’t make it because he was hospitalised with pneumonia. The afternoon before he died, just out of hospital, Ray had visited the fire at the Redfern Tent Embassy, making plans for the next stage of the struggle. We must ensure the upcoming march on 1 May is loud in tribute for this tireless warrior.

Uncle Ray was a key link binding together many groups and struggles here in Sydney, across Australia and indeed across the world. His compassion and patience welcomed many people into the struggle and ensured they had a meaningful role to play. His passing is a tragic blow. But he lives on in the struggle. Solidarity sends its condolences to all Ray’s friends, family and comrades. Rest in Peace with your ancestors my dear Uncle, you have earned this rest more than anyone.