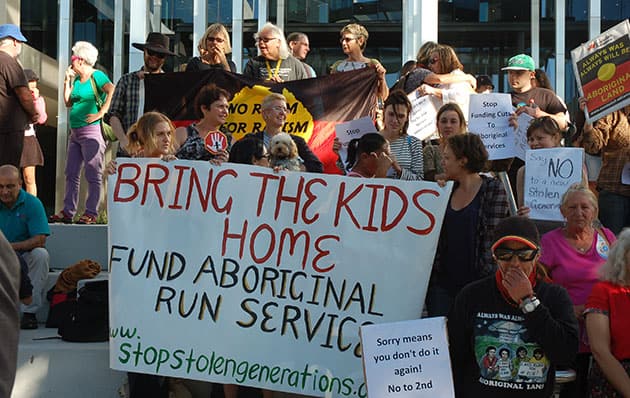 A Royal Commission into the “juvenile justice” and “child protection” systems in the Northern Territory, sparked by revelations on Four Corners of torture in the Don Dale detention centre in Darwin, continues to reveal stories of horrendous abuse against Aboriginal children.

Meanwhile, a further Four Corners investigation has shone the spotlight on violence kids are suffering in residential care. Recent protests in juvenile detention centres across the country further demonstrate the national scale of the problem.

Hearings about juvenile detention centres during the Royal Commission have revealed instances of children being tied up spread-eagled, forced to drink urine, stripped and left naked, and one who was left alone in his cell for four days. A report by Amnesty found that in Queensland children were being forced to squat for extended periods and had dogs used on them, which is a clear breach of international standards.

Through the Royal Commission, Aboriginal communities are pointing out the connections between forced child removal, youth detention and suicide. At Yirrkala in Arnhem Land, women said, “we are losing our children to foster parents. What about our role, our culture?” one woman asked. “Sending children back to the homelands is the best medicine.”

On 14 November, Four Corners aired another investigation, this time into the scale of the abuse in residential care homes. “Child Protection” departments claim children are not safe with their parents, but they often end up in a much worse situation after removal.

Since the privatisation of the “out of home care” sector, many of these homes are now run for profit by slimy capitalists. Four Corners showed houses that were dilapidated, filthy, crowded and without enough social workers to provide supervision for all of the children. Sexual assault offenders are housed with victims of sexual assault, some as young as 12.

The parasites who run the houses receive hundreds of thousands of dollars per year for each child, sometimes up to a million dollars if the case is “urgent”. Meanwhile they ration out a measly $100 per child per week to cover food, clothing and all other necessities.

Four Corners failed to mention that nationally, more than one third of children in “out of home care” are Aboriginal and the proportion is well over half in many regions, including in Sydney.

The report also suggested that no one wants the children that are placed into the homes, when in many cases the exact opposite is true. Groups like Grandmothers Against Removals have supported Aboriginal people fighting for return of their children and have shown that with sustained protests, families can be reunited.

Unless these children escape “child protection”, they are likely to end up in juvenile or adult prisons.

A report by the Institute for Health and Welfare found that children in child protection were 14 times more likely than the general population to be in juvenile detention or under some form of criminal supervision. Amnesty research shows Aboriginal children make up two thirds of those locked up in detention centres in Queensland, even though they are only 8 per cent of the general population.

Despite the Royal Commission’s focus on the NT, kids in detention across the country are standing up and defending themselves from abuse. There have been uprisings in several juvenile prisons in the past two months, with youth taking control of the facilities in Melbourne, Sydney, Townsville and Banksia.

In November about 40 kids in the Melbourne Youth Justice Centre at Parkville rioted, taking over the facilities and climbing onto the roofs of the buildings. The mainstream media portrayed the kids as wild youth intent on destruction. But Four Corners showed that during similar riots in Don Dale, authorities lied about events and the youth were proved to be entirely justified in fighting back.

Victorian Premier Daniel Andrews has demonised the detainees and tried to send all those involved to a maximum-security adult prison at Barwon. Detainees were held there in, “solitary confinement… they haven’t seen the sky for a week” according to Ruth Barson from the Human Rights Law Centre.

After lodging a challenge in the Supreme Court, the Aboriginal Legal Service forced the Andrews government to agree to shift the Aboriginal youth from Barwon, though their future remains unclear.

Every remote community visited by the Royal Commission has made demands for self-determination and funding for community controlled programs to deal with struggling youth and families. We need a powerful wave of protest nationally to shut down all child prisons, bring the kids home to their communities and smash racist laws like the NT Intervention.