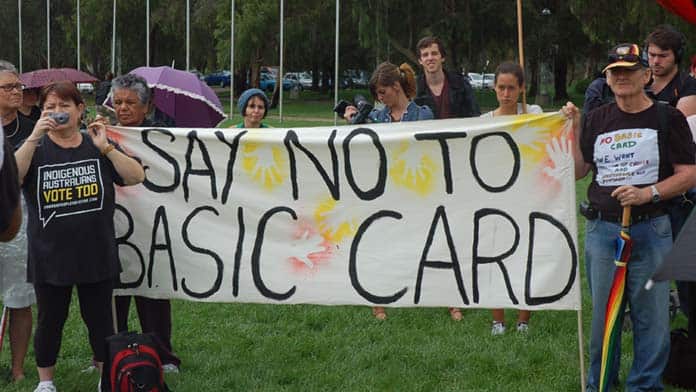 The bill was set to pass through the Senate in September, before parliamentary sittings were cancelled following the death of the Queen.

This means that about 18,000 people with Centrelink payments quarantined on the CDC, in six “trial sites” across Australia, will likely remain on the card until close to 31 December, when the CDC was already to expire under existing legislation.

The CDC controls 80 per cent of the income of Centrelink recipients, denying any access to cash and restricting purchases. $170 million has been spent on administration, an outrageous sum for such a small cohort of people.

Labor has rightly denounced this scheme as humiliating and completely ineffective in meeting its stated goals of stopping gambling, alcohol and drug abuse and related social problems.

But Labor currently has no timetable for reforms to free more than 22,000 people still forced onto the BasicsCard, another form of welfare quarantining introduced with the racist NT Intervention and first rolled out by the Rudd government. Ninety-three per cent of people on the BasicsCard live in the NT and more than 80 per cent are Aboriginal.

During the federal election campaign, Labor politicians such as Linda Burney criticised all forms of compulsory welfare quarantining and promised that the BasicsCard would be made voluntary.

This promise is looking very shaky. Amanda Rishworth, Labor’s Minister for Social Services, has clearly left the door open to continuing to compel people onto the BasicsCard, if this is a recommendation from planned “community consultation”.

Over the past 15 years, stage-managed consultation sessions have played an important role both for Labor and Liberal governments attempting to justify welfare quarantining.

All forms of welfare quarantining have roots in the paternalistic, apartheid-style systems of control over incomes operated by Aboriginal Protection Boards for much of the 20th century.

The Protection system was reborn with the Intervention, when John Howard argued Aboriginal people were incapable of self-determination.

The Intervention suspended the Racial Discrimination Act (RDA) to allow for all Centrelink recipients living on Aboriginal lands in the NT to have 50 per cent of their income controlled under a system called Income Management.

Aboriginal communities in Cape York were also targeted by Income Management, through referral by a local “Family Responsibilities Commission” rather than the blanket approach of the NT.

When Labor took office in late 2007 they extended and deepened Income Management, introducing the BasicsCard as the main way that targeted people could access quarantined funds.

The BasicsCard is more restrictive than the CDC and can be used only to buy essential items such as food, clothes and medicines, at government-approved stores.

The CDC was first introduced in 2016 by the Abbott government, with the support of Labor. The card can be used anywhere Visa debit cards are accepted, with some products like cigarettes available for purchase on the CDC that are not available on the BasicsCard.

Like with Income Management, it has been predominantly poor communities with large Aboriginal populations that are targeted by the CDC. But the fact that a small majority of recipients are non-Indigenous has given increased political clout to local opponents of the CDC.

Labor recognised the political opportunity and campaigned hard on abolition of the CDC through the federal election. Whereas the BasicsCard has been justified by racist, paternalistic ideas about Aboriginal incapacity, Labor ran a scare campaign that the CDC would be expanded to groups of “deserving poor” such as age pensioners.

In recent years, BasicsCard recipients in the NT and parts of Queensland have been given the option of transferring onto the CDC.

Under Labor’s current bill, however, this mostly Aboriginal cohort will be forced back onto the BasicsCard once the CDC is abolished.

The blatant hypocrisy and racism of this approach was criticised by many community leaders and policy experts during recent Senate Committee hearings.

Labor needs to keep its election promises and break completely with any support for welfare quarantining.

We cannot tolerate a situation where one form of Centrelink controls, mostly affecting non-Indigenous people, is deemed unacceptable while Aboriginal people in the NT continue to face the regime of racial segregation established by the Intervention.