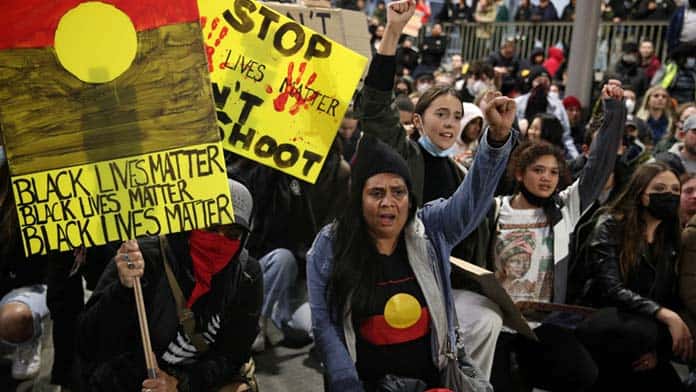 After Scott Morrison changed the national anthem, his Indigenous Affairs Minister Ken Wyatt claimed that, “we as a nation stand more united and together today than we have at any time since 1788”.

Aboriginal people face the highest rate of imprisonment in the world. They make up almost 30 per cent of those in prison yet are 3 per cent of the population. This is the result of a war on self-determination that has seen Aboriginal-run services closed or starved of funds, while spending on police and prisons has surged to more than $16 billion a year.

Despite 441 deaths since the landmark Royal Commission into deaths in custody in 1991, no police officer or prison guard has ever been held criminally responsible.

NT police officer Zachary Rolfe will finally face trial for murder in July over his 2019 shooting of Warlpiri man Kumanjayi Walker in Yuendumu. But unlike the Aboriginal people routinely jailed for minor offences, Rolfe was immediately granted bail and allowed to live in Canberra on full pay. His lawyers have successfully had the trial moved to Darwin, 1500 kilometres from Yuendumu.

Most police do not face any consequences. In December, Victoria Police confirmed that both officers involved in the death of Tanya Day in 2017 had escaped any internal disciplinary action. Prosecutors also failed to bring charges.

Tanya Day was unnecessarily arrested for public drunkenness, and hit her head in a cell and died after officers failed to check on her.

Numerous groups at the NSW inquiry called for independent investigations into deaths in custody—instead of the current system where the Coroner relies on police investigators.

Aboriginal people have consistently called for less police involvement in their communities and more Aboriginal control. Imprisonment only entrenches disadvantage for those put through prison.

One proposal is the Walama Court. This would see “members of the Aboriginal community and Elders” work with a judge to, “provide offenders with an opportunity for change”, as Sarah Crellin told the inquiry. This is designed as an alternative to prison.

Another Aboriginal-run program is the Maranguka Justice Reinvestment Initiative in Bourke, a town in NSW’s northwest. An assessment in 2018 found it had significantly reduced domestic violence, juvenile offending and time spent by Aboriginal people in custody.

But the NSW government has failed to provide funding to extend this approach elsewhere.

Instead it has boasted of a record budget for the police, as it begins spending $583 million for another 1500 officers.

Speaking at the NSW inquiry, Assistant Police Commissioner Anthony Crandell refused to acknowledge that racism in the police force contributes to the over-imprisonment of Aboriginal people. Instead he promoted “proactive policing strategies” such as the notorious Suspect Target Management Plan, which has seen police monitor and harass people identified as likely or repeat offenders.

The secretive program, which often targets children, was slammed by the police watchdog in January last year as involving “unreasonable, unjust and oppressive” tactics to target individuals. It estimated that 72 per cent of the 429 children targeted were Aboriginal.

The police are a violent and racist institution.

Deaths at the hands of police are routine—and not just for Aboriginal people. In early December Queensland police shot dead 22-year-old Somalian man Raghe Abdi, claiming he had lunged at them with a knife during a mental health episode. They later alleged that he had killed an elderly couple and was a terrorism suspect, even though this was rejected by the Federal Police.

Later that month 20-year-old Bradley Balzan was chased by four plain clothes police in Western Sydney, who failed to identify themselves as police before they shot him dead when he tried to defend himself.

It was the mass Aboriginal rights movements of the 1970s that won gains over land rights and self-determination. As the BLM movement’s successes in defunding the police in the US show, it is movements on the streets that can win change.