Kalgoorlie rages against racism after 14-year-old run down 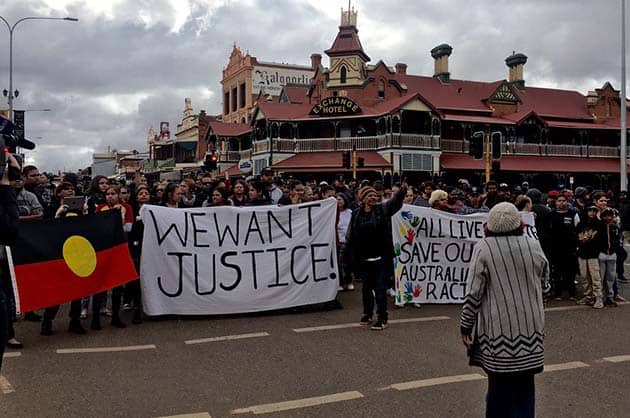 The murder of 14-year-old Elijah Doughty in Kalgoorlie has shone another spotlight on the brutal racism inflicted on Aboriginal children in Australia. His death came just one month after graphic footage of guards torturing black children in NT detention centres.

Elijah was riding a motorbike when he was run down by a 55-year-old white man driving a four-wheel drive off road. The man, whose identity has been suppressed by the courts, left Elijah for dead. His body was found early in the morning of Monday 29 August. An autopsy report has not yet been released.

Elijah had celebrated his birthday the day before and was due to star in a football grand final the following weekend.

But the media has focused on what they branded a riot in response to his death.

A crowd of more than 200, both Aboriginal people and supporters, marched to the Kalgoorlie courthouse the next day calling for justice and anxious to attend the court. They were led by members of Elijah’s family, outraged that the charge was manslaughter instead of murder. The Australian legal system has a long history of charging whites who murder black people with manslaughter and has failed to hold anyone accountable for the deaths of Aboriginal people in cases such as Mulrunji Doomadgee on Palm Island, or Ms Dhu in WA.

Racism in Kalgoorlie is out of control. In recent years, there have been continual comments on popular Kalgoorlie social media sites calling for Aboriginal children to be murdered. Extreme racists, claiming to be angry about petty crime, had been openly saying things like, “how many bodies does it take to fill a mine shaft”.

When the protest for Elijah reached a courthouse, police denied entry to some people, including some members of his family. Protesters started banging on the glass doors demanding to be let in. Eventually, the glass was smashed and police attacked the crowd, including some trying to negotiate with pepper spray and batons.

Elijah’s aunty Donna Schultz explained to Solidarity, “emotions were high because of how Elijah was hunted and run down like he was nothing. Bigger kids saw the little kids getting attacked and they jumped in. They grew up with Elijah; he was one of their own. The majority were actually trying to stop everything, but police were just hitting anyone with batons”.

An Indigenous man who spoke anonymously to Guardian reporter Calla Wahlquist, due to fear of repercussions from his employer said, “I’m not condoning it, not at all, but would you be here if that riot hadn’t have happened? Would we have got this level of media coverage of what goes on in this town?”

The crowd dispersed after the court appearance was cancelled and police asked senior members of Elijah’s family to address the crowd and call for calm. Police promised they would inform the family about court proceedings, but instead sent the accused to Perth for the appearance without letting them know.

Two rallies calling for justice for Elijah in Perth, on 1 and 5 September, were addressed by members of his family. Solidarity actions have also been held in Geraldton and Brisbane. Elijah’s family and supporters are maintaining a camp at a memorial established where the boy was killed. They are continuing their calls for justice and to defend the site against desecration, after racist graffiti appeared around the town.

Numerous media reports accused Elijah of stealing the motorbike he was riding. While police say that the 55-year-old man who allegedly killed him had reported the bike stolen, there is no evidence Elijah stole it. He was a talented mechanic who often fixed up bikes for friends.

And nothing can justify a vigilante murder over the theft of a bike.

The media coverage, and the racist attitudes it fosters in the community, reflect the way that black children and their families are routinely demonised for their own oppression and poverty. They suffer forced removal into state care or juvenile prisons across Australia at world beating rates. Aboriginal families across WA are currently having services withdrawn from remote communities, to force them into towns like Kalgoorlie where there are no opportunities, simply vicious racism.

The struggle for justice for Elijah goes beyond demands for the conviction of a murderer. It must mean an end to the war on Aboriginal children and self-determination for his people.