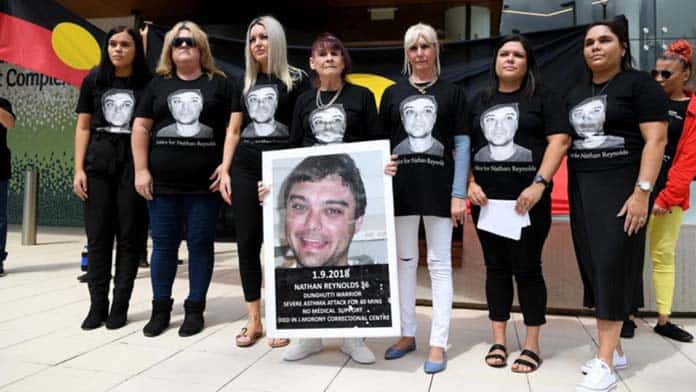 On 10 March, the findings of a coronial inquest into the death of Nathan Reynolds were handed down in the Lidcombe Coroner’s Court.

Nathan was a 36-year-old Anaiwan man who died in 2018, following an asthma attack while being held in the John Moroney Correction Centre in western Sydney.

Deputy State Coroner Elizabeth Ryan found that Nathan’s death was “contributed to by deficiencies in the management of his severe asthma… and in the immediate response to his medical emergency”.

As Nathan’s sisters Taleah and Makayla Reynolds told supporters outside the court, “It is soul-crushing knowing that Nathan died on a cold prison floor… Nathan’s death was preventable.”

Nathan had repeatedly visited the prison clinic complaining of asthma but his condition was never noted in the prison’s chronic diseases system and he had no asthma management plan.

Nathan and his cellmates buzzed frantically for help during his fatal attack but guards failed to call an ambulance and took 12 minutes to respond, telling the court, “we were taught never to run unless it’s an officer actually getting assaulted”.

When a nurse from Justice Health eventually arrived she gave Nathan an injection to treat a drug overdose. Taleah said, “We believe that Nathan was stereotyped as a drug user.”

Despite finding that Nathan’s death was the result of appalling failures that breached Justice Health policies, the coroner did not recommend any consequences for staff.

Taleah said, “Until someone suffers some consequences for the deaths of our people, this is just going to keep happening.”

This April marks 30 years since the release of the findings of the Royal Commission into Aboriginal Deaths in Custody (RCIADIC). The report made 339 recommendations but most have been ignored.

Upwards of 470 Aboriginal people have died in custody since 1991, including at least four more in March alone. On 2 March a 35-year-old man died in the Long Bay prison hospital, the notorious facility where David Dungay Jnr died in 2015. On 5 March, a 44-year-old woman was found dead in Silverwater prison, in an apparent hanging suicide.

The removal of hanging points from cells was one clear recommendation from the RCIADIC that continues to be ignored. In 2017, Tane Chatfield died by hanging after serving two years unsentenced in Tamworth prison. Prison administrators told Tane’s inquest that hanging points had not been removed because it was a heritage building.

Corrections Commissioner Peter Severin recently told the NSW Parliament there was no money to remove hanging points despite a multi-billion-dollar budget to expand prison capacity.

These callous priorities are indicative of the continued systemic racism that the RCIADIC argued was rife in all Australian institutions.

RCIADIC was clear that deaths in custody would continue to escalate so long as the mass incarceration of Aboriginal people continued. The report found that this incarceration was a direct result of the regime of racist domination over Aboriginal lives and Aboriginal land.

A key recommendation of RCIADIC was to ensure Aboriginal people enjoyed rights to self-determination and that land and resources were placed under Aboriginal control to challenge poverty and oppression.

The decades since, however, have seen a war on self-determination. Aboriginal community-controlled organisations and employment programs have been disbanded and overtly racist initiatives like the NT Intervention dominate the policy landscape. Budgets have massively expanded for police, prisons, child-protection agencies and other racist control measures like the “Income Management” system run by Centrelink.

Just this week, the NT government walked away from the recommendations of another Royal Commission, held into the abuse of Aboriginal children in NT prisons in 2017, instead flagging tougher bail laws and increased police surveillance.

The result of this punitive policy agenda has been an explosion in the number of Indigenous people locked up. In 1991 an average 2140 Indigenous people were in prison Australia-wide. In the December quarter of 2020 that had risen to a shocking 12,344.

In March, Severin defended his decision to stop publicising information about deaths in custody, arguing such announcements “cause a lot of anger and a lot of grief”. Corrections are right to be scared of a backlash. 2020 saw the biggest protests against deaths in custody in Australian history, with tens of thousands of people joining Black Lives Matter rallies.

Aboriginal rights campaigners have called another National Day of Action against Deaths in Custody for Saturday 10 April, marking 30 years since the release of the RCIADIC report. It’s crucial these rallies regain the momentum of 2020 and smash the racist system of control that continues to kill with impunity.