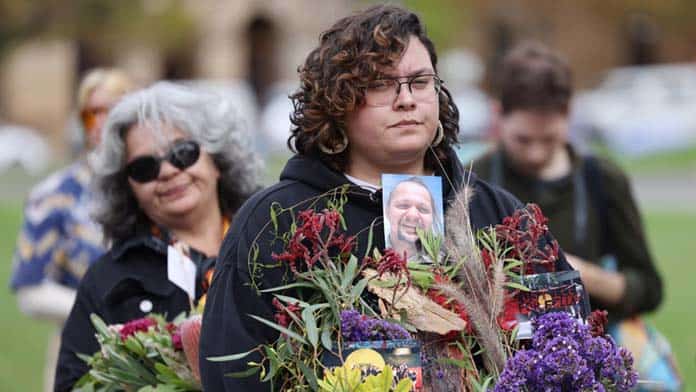 A coronial inquest has revealed a string of efforts by prison guards to obstruct investigations into the death of Wayne Fella Morrison.

On 23 September 2016, the Wiradjuri, Wirangu and Kookatha man was wrestled to the ground by prison guards outside his cell at the Yatala Labour Prison in Adelaide.

Twelve guards crowded around Fella, pressing him into the floor, handcuffing him, leg-cuffing him, and binding him in a spit hood.

Five minutes passed before the guards dragged him out of the hallway face-down, into a van for a 122 second trip to the prison’s maximum security. By the end of this brief trip, Fella’s face was blue and his body unresponsive. It took the guards almost three minutes after unloading Fella from the van to commence CPR.

Fella became the 376th Aboriginal person to die in custody since the Royal Commission into Deaths in Custody in 1991. The coronial inquest into his death has been plagued by delays. Although initially expected to be completed in 2018, final arguments are now expected on 4 August.

The prison guards and staff at Yatala Prison have roadblocked investigations into Fella’s death at every opportunity.

Seven out of the eight guards who loaded Fella into the van refused initially to provide statements to police. One guard during the inquest stated that he “advised” another not to upload incident reports on the day of his death until they had sought legal advice.

Moreover, 18 guards and one nurse at the prison sought the removal of the Coroner from the case and have successfully claimed a legal protection called “penalty privilege”.

Although the law has since changed in South Australia, this did not apply retrospectively, allowing “penalty privilege” to continue in this inquest. This has allowed guards to refuse to produce evidence or answer any questions that could subject them to a penalty in their jobs.

Of the few guards who have answered questions at all, most “could not recall” events. In fact, the words “I don’t recall” appear at least 597 times in the transcripts of the hearings and the word “privilege” appears 1603 times.

The assistant general manager at the prison on the day told the inquest he believed that guards had colluded to “run interference” and obstruct the investigation.

Although there is shocking CCTV footage of a dozen guards crowding, piling onto and restraining Fella, there is no CCTV footage of what happened in the van. The inquest has been told that the footage did not exist as it was obstructed by the head of a guard who “would have been” physically holding Fella to the floor.

The management of the prison has also been shockingly exposed.

The guards at the time of Fella’s death did not have current first aid training. None had current CPR. Despite having a duty to maintain an up-to-date defibrillator in the prison, Yatala’s was broken.

The guards’ lawyers have attempted to argue that Fella died due to “excited delirium”, a condition where people act aggressively, have superhuman strength and are immune to pain. The condition, which is not recognised by the World Health Organisation, can supposedly cause heart failure. US law enforcement have often tried to use it to explain deaths in custody, including, unsuccessfully, in the case of George Floyd.

Rates of Indigenous imprisonment and deaths in custody are an ongoing racist injustice.

As Fella’s sister Latoya Rule noted, “at the time of the 1991 Royal Commission into Aboriginal Deaths in Custody, Aboriginal people accounted for one in seven deaths in custody. That number has now soared to one in four.”

While penalty privilege no longer exists in South Australia, the collusion amongst guards shows a culture of contempt for inmates’ safety. It shows why prisons are such a dangerous place for Indigenous people.

Wayne Fella Morrison’s family have campaigned for justice all the way through the process, holding actions outside court and gathering 25,000 signatures on an online petition for an immediate ban on spit hoods. South Australia has now agreed to phase out their use over the next six months.

Governments in Australia are still spending billions of dollars building new mega-prisons in both Queensland and NSW. Inmates at Parklea prison in Sydney recently took to the roof to protest behind the slogan Black Lives Matter against the racism of the prison system.

Indigenous people are crying out for services, jobs and self-determination, not over policing and more prisons. A movement to make Black Lives Matter is crucial to secure these community-controlled services and end deaths in custody.