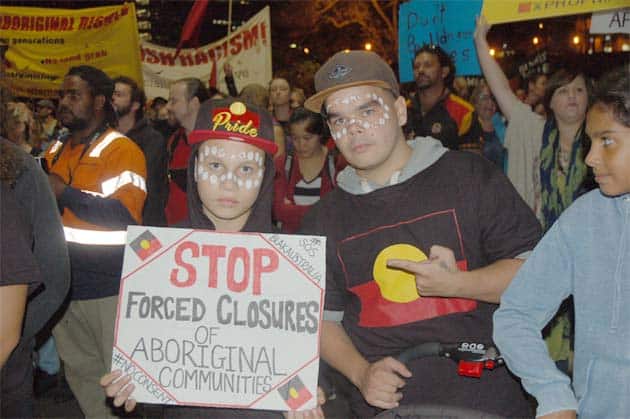 The WA government has confirmed plans to halt services to hundreds of remote Aboriginal communities and to force residents to move to larger towns.

In November 2014 Western Australian Premier Colin Barnett announced plans for the forced closure of 150 of 274 “unsustainable” remote Aboriginal communities. In the face of nation-wide protests he was forced to backtrack, promising consultation with communities and a review.

The resulting report, Resilient Families, Strong Communities: A roadmap for regional and remote Aboriginal communities, was released in July.

While it does not propose the bulldozing of communities, as seen in Oombulgurri in 2014, its proposals will just as surely strangle remote communities.

And it admits that basic services other Australians take for granted—like sewerage, road maintenance and housing, are already non-existent in many communities.

The basic complaint of the report is that it costs more to provide for Aboriginal people living in regional and remote communities.

It proposes streamlining investment into ten larger towns, which, along with town-based reserves, will receive upgrades to housing and services. The government will only invest in towns with educational and employment prospects, while smaller communities will be left to become “self-sufficient.”

WA Greens MP Robin Chapple described the proposals as “the removal of people off country by stealth.”

The report begins by describing the significantly worse health, employment and education outcomes for Aboriginal people living in regional and remote areas, stressing the challenges of remoteness.

In fact, residents in remote communities are healthier than Aboriginal people living in townships. And of course this remoteness doesn’t prevent some of the world’s largest mines prospering in these areas.

The report flags ten “priority actions” to start over the next two years.

The WA government will spend $26 million over three years on the Kimberley Schools Project. But the report acknowledges that Aboriginal students wanting to attend secondary school will have to board away from home.

To address the chronic state of housing the WA government will set up an Aboriginal Housing Fund with up to $200 million available over four years—but only in communities with “strong economic prospects.”

Disgracefully, the government will focus on “transitional housing rather than public or community housing.” This means there will be no increase in ongoing affordable housing and instead families will only get housing on a short-term basis before they are left at the mercy of what the report acknowledges is an unaffordable private housing market.

Access to “transitional housing” is contingent on at least one parent being employed and an 85 per cent school attendance rate.

Under the heading “better living conditions” the report outlines plans to charge Aboriginal households for utilities where currently many are not because land is communally owned.

Indigenous welfare recipients will have to work 25 hours per week for the dole on Community Development Projects.

Kara Keys, ACTU Indigenous officer, said that this, “entrenches people into welfare dependency because if you’re working for 25 hours a week, then how do you have time to look for a job, and if you’re required to do this week in week out then how is this breaking the welfare cycle.”

Another “priority action” is the continuation of the Cashless Debit Card Trial in the East Kimberley, a policy that humiliates and disempowers people by controlling their income.

Politicians blame Aboriginal culture for the appalling conditions created by government policies. They aim to sever Aboriginal people’s connection with their land and assimilate them into the mainstream capitalist economy.

The answer is simple. Remote indigenous communities should receive government support for the services and infrastructure that most other Australians take for granted.