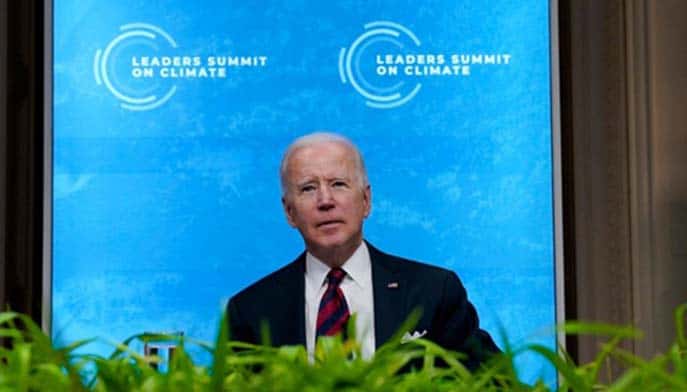 Recent pledges from Joe Biden and other wealthy nations suggest deep emissions cuts are on the way. But they go nowhere near what’s needed argues James Supple

Morrison has refused to increase Australia’s pathetic target of 26-28 per cent emissions reduction by 2030. The figure was set back in 2013 when Tony Abbott was still prime minister.

Joe Biden used his virtual summit on Earth Day in late April to announce a doubling of the US’s climate target to a 50-52 per cent reduction in emissions by 2030.

Other rich countries also announced an increase in ambition, with the EU aiming for 55 per cent by 2030, and Japan for 44-48 per cent compared to 2005 levels.

After Donald Trump’s efforts to completely derail global action, these figures seem impressive. But they are still nowhere near enough to stop dangerous global heating.

The world has already warmed by at least 1.1 degrees since 1880, according to NASA. This has led to more powerful bushfires, storms and heatwaves, including the unprecedented fires here in the summer of 2019-20.

The Paris climate summit in 2015, on the advice of the scientific body the Intergovernmental Panel on Climate Change (IPCC), agreed that the world should aim to limit warming to 1.5 degrees, giving the potentially catastrophic consequences beyond that.

But even the increased targets world leaders are now promising would likely produce a catastrophic 2.4 degree increase.

Even at 1.5 degrees, climate scientist Will Steffen warns: “Heatwaves, droughts, bushfires and intense rain events will become even more severe. Sea levels will rise, species will become extinct and crop yields will fall. Coral reefs, including the Great Barrier Reef, will decline by up to 90 per cent.”

A report by Australia’s Climate Council released in April warned that inaction meant it was now “almost certain” the planet would exceed 1.5 degrees of heating.

This also carries the danger of detonating feedback effects, like ice sheet collapses or the release of vast stores of frozen methane in the Arctic, that could trigger runaway temperature increases making vast areas of the planet uninhabitable for humans.

In order to stabilise the climate wealthy nations like Australia and the US will need to use less carbon than their share of the global population implies.

This is because developing nations and those with a lower standard of living like China and India are still heavily reliant on fossil fuels to drive economic development—a situation that will not change without massive technology transfers from rich countries.

In India, for instance, 13 per cent of the population are still not connected to the electricity grid.

The wealthy nations are responsible for the bulk of the historic emissions that have pushed carbon pollution to dangerous levels.

As the Climate Council argues, rich nations like Australia need to radically reduce emissions by more like 75 per cent by 2030, or at least 57-63 per cent for the US, according to Climate Action Tracker.

Even Biden’s new pledge falls far short of this.

Nor is it clear each country will even meet their new targets. Under the Paris Agreement negotiated in 2015 to coordinate global action on emissions, country pledges are completely voluntary and non-binding.

In the US, Biden’s key policy to meet his target is his infrastructure and jobs plan.

Around half, between $1 trillion and $1.3 trillion, is dedicated to climate spending, according to an assessment by academic Adam Tooze.

This sounds impressive, but it is spread over eight years and amounts to just 0.5 per cent of GDP per year. A comparable figure in Australia would be $9 billion a year—one-fifth of annual defence spending and pathetic compared to what is needed.

Bernie Sanders, with the support of climate activists such as Bill McGibben, has proposed a $16.3 trillion spending plan as necessary to meet the task of slashing emissions.

Spending on this scale is needed within the next ten years not just to reach 100 per cent renewable energy, but to dramatically increase the use of public transport, replace much of air travel with high-speed rail, replace appliances using gas for heating and cooking, and retool manufacturing to run on zero carbon energy sources like hydrogen.

Biden’s plan is designed to avoid challenging the power of fossil fuel companies and to promote only changes that business will support. His spending is as much about positioning US companies to overtake China in new technology industries as it is about tackling global heating.

So he plans to spend more to promote the use of electric vehicles through installing charging stations and offering subsidies on car sales than on public transport.

But Biden has not proposed any date to ban new petrol-power car sales.

This fits with the plans of a number of US manufacturers to gradually expand production of electric vehicles, such as GM, which says it aims to have production all electric by 2035.

This is based on the hope that, by then, electric vehicles will be cheaper than petrol cars. But there is no guarantee of such dramatic change, with fewer than 2 per cent of new car sales currently electric.

Biden’s plan to have 100 per cent renewable electricity by 2035 is similar. While the government will pay for a new transmission grid, paying to build new solar and wind power itself will be left to corporations. He is simply hoping that the falling cost of renewable energy will push out fossil fuels.

But without rules forcing the closure of coal and gas-fired power stations, many could still be operating in 2035.

A study from December showed that 30 per cent of all existing fossil fuel power plants would have to close before their expected lifespan ends to meet the target.

And his approach of leaving business to fund the transition risks leaving working class communities behind instead of itself guaranteeing well-paid jobs to workers currently in the fossil fuel industry.

As Tooze put it: “Biden’s climate programme appears hobbled by constraints, lacking in focus and inadequate in ambition. And this is before the Jobs Plan has even been submitted to the gruelling process of Congressional bargaining.”

The action needed will require challenging the profits of the fossil fuel corporations. Oil, gas and coal companies will have to go out of business.

But when Biden was tested on this during his election campaign he failed, declaring himself a supporter of gas fracking and offering to ban it only on federal land.

This was a sleight of hand since 90 per cent of fracking takes place elsewhere.

After the decline in global emissions due to the pandemic in 2020, they are again rocketing back as lockdowns ease and economies restart.

The International Energy Agency (IEA) says we are on track for the second largest increase in emissions in a single year in history, with emissions this year set to be almost back to the level of 2019.

Before the pandemic, global emissions were still rising, with the figure in 2019 the highest ever recorded.

The world is still hurtling towards catastrophe. The UN Production Gap report in December found that despite talk of a green recovery, the G20 grouping of the world’s largest economies committed $230 billion in COVID-19 related spending into fossil fuel production and consumption, 50 per cent more than into clean energy.

The world’s nations are planning to actually increase fossil fuel production by 2 per cent a year, which would result by 2030 in more than double the level that is needed to keep heating to 1.5 degrees.

These production plans and projects are far beyond what their climate pledges implied.

The fossil fuel business remains hugely profitable. The big oil companies have gone back to making huge profits after a stutter during the pandemic, with Exxon Mobil reporting $3.5 billion profit and Chevron $1.8 billion in the first three months of 2021.

Demand for coal is also tipped to grow strongly, approaching the all-time high set in 2014 this year, the IEA says.

This is reflected in Australian companies’ plans to keep exporting coal well past 2050, the date when the Paris Agreement says the world has to be at net zero emissions.

In the three decades since world leaders first agreed to tackle global heating at the Earth Summit in Rio in 1992, global emissions have increased by 65 per cent.

While some countries have begun to reduce their emissions, all this has done is slow the continuing increase at a global level.

As the last IPCC report put it: “Far-reaching and unprecedented changes in all aspects of society” are urgently needed to stop catastrophe. The past 30 years have shown that world leaders are too committed to the profits of the fossil fuel giants and huge corporations to take the action needed.

We will need to step up our efforts and build a climate movement with the power to force action if we are going to avert disaster.