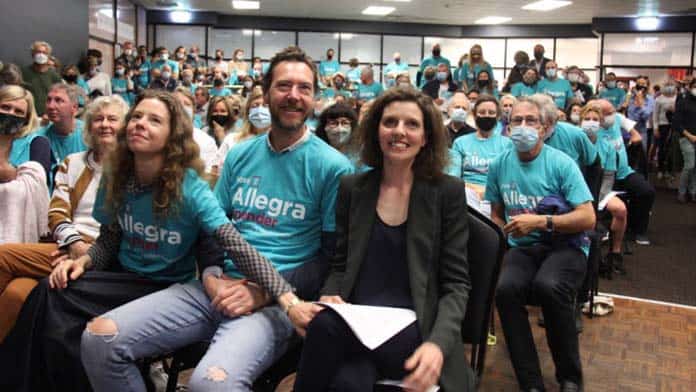 Independents are campaigning in a series of Liberal heartland seats targeting Morrison’s failure on climate change. Caitlin Doyle explains why they’re not the answer we need

Anyone who wants to see action on climate change will be celebrating if the Morrison government is kicked out in this year’s federal election. The Coalition’s pitiful emissions reduction targets in the face of unprecedented climate disasters around the world have left millions of people furious.

Morrison’s net zero by 2050 target, which lacks a real plan for emissions reduction and relies on dubious technology, is woefully inadequate. The Australia Institute’s 2021 Climate of the Nation survey found that a record 75 per cent of voters are concerned about climate change, meaning it will be a key issue in the upcoming election.

Unfortunately, the ALP has offered little in the way of an alternative on climate. Anthony Albanese has talked up Labor’s commitment to climate job creation, but has little to say about what kind of jobs these will be. Labor also continues to support new gas developments.

Morrison’s intransigence on climate, combined with the ALP’s lack of ambition—and a more general decline in trust for the major parties across Australia—has led some sections of the climate movement to back a series of “climate independents” in the election.

This year, the organisation has so far amassed a $3.6 million election campaign “war chest” to back independents running in seats across the country.

A number of School Strike for Climate activists campaigned for Steggall in 2019. But there are serious problems with looking to independents to confront climate change.

Most of the climate independents are running in blue ribbon Liberal seats that are among the wealthiest in the country, including Wentworth, North Sydney, Goldstein and Kooyong, and want to appeal to disillusioned Liberal and conservative voters who are concerned about climate.

Many of them describe themselves as business figures and see business as the solution to the climate crisis—a message tailor-made for the wealthy residents they are appealing to, who are generally pro-business, anti-union and against taxing the rich.

Kylea Tink, running in North Sydney, describes herself as “a mum and a businesswoman and a CEO”. Tink was a Liberal supporter right up until her decision to run against Liberal MP Trent Zimmerman, who she voted for in 2019.

Wentworth candidate Allegra Spender’s father and grandfather were both Liberal MPs. She presents herself as a Liberal at heart, saying, “Today’s Liberal Party is not the same party of my father and my grandfather.”

Her campaign body, Wentworth Independents, is headed by Lyndell and Daniel Droga, who boast a $20 million Woollahra home funded through short-selling and stock trading. Spender has stressed the benefits of climate action for “the economic opportunity it presents to business”.

Climate 200, whose board includes a number of former Liberal MPs including one-time leader John Hewson, insist they are non-partisan and driven only by science-based climate action. But their donors include billionaires like Nick Fairfax, Simon Hackett and Mike Cannon-Brookes, who are unlikely to back candidates who pose any serious threat to the political status quo.

Climate 200 talk up the potential for making profits through decarbonising the economy and are explicitly pro-business.

But business will not deliver changes at the speed needed. The Climate Council says Australia needs to reduce emissions by 75 per cent by 2030. This kind of radical action will only come through a government plan involving massive investment not just in renewable energy but retrofitting household appliances, zero emissions transport, manufacturing and agriculture.

Worse, the existing reliance on businesses to deliver renewable energy projects has seen a race to the bottom on wages and conditions on solar and wind farms. This has been a disaster for workers in the industry, who earn far less than the highly unionised mining sector.

The climate movement in Australia has been set back by climate action being counterposed to jobs and workers’ rights. This was exemplified by the 2011 carbon tax, which pushed the cost of polluting onto consumers.

Understandably, some workers have come to believe that decarbonising the economy will mean job losses and higher costs of living. Recent workplace closures, like the Holden and Bonds factories and the Hazelwood coal-fired power station, have left workers on the scrap heap. The absence of any indication from Labor that climate action would guarantee jobs for workers in fossil fuels industries led to the Coalition being reelected in 2019.

It is only in recent years that this has started to be addressed, with demands for climate jobs and a just transition for fossil fuel communities becoming more common on protests.

Backing candidates who promote profit-making opportunities for “green” businesses will make it difficult for climate activists to appeal to workers worried about job security and cost of living.

Another problem is that candidates who support climate action are not necessarily progressive on other issues. In fact, many of the climate independents have Liberal party backgrounds or support neo-liberal policies that attack unions, workers and public services.

Zali Steggall, for example, was prepared to support the government’s Ensuring Integrity Bill, which could have seen the CFMEU deregistered. If climate activists were to back Steggall again, this could send a message to CFMEU members that the movement doesn’t care about workers and their conditions. At the 2019 election she described herself as “an economic conservative who believes in small but effective government” and opposed Labor’s plans to increase taxes on wealthy investors through changes to negative gearing and dividend imputation.

The climate bill that Steggall eventually put forward was hardly any better than Morrison’s 2050 commitment.

A movement outside parliament

Some argue that more independents in parliament could force change. Simon Holmes à Court himself has argued that, “If we can just win two or three seats it’s highly likely there will be a minority government” where independents call the shots. But there is no reason to believe that this will work.

After Julia Gillard’s reelection in 2010, independent MPs held the balance of power and supported a minority Labor government. But this did not produce any overall shift to the left. In fact, Labor cut uni spending, cut welfare for single parents, reintroduced offshore detention for refugees and failed to raise taxes on the rich.

It also resulted in the carbon tax. This was a political disaster because Labor wanted a policy acceptable to business. The carbon tax allowed them to pass the cost onto consumers, meaning Tony Abbott was able to capitalise on fears it would push up the cost of living.

None of this is to say that climate activists should be indifferent to who wins the election. Getting rid of Morrison would buoy progressives everywhere.

But simply backing independents, minor parties or Labor in the election is no answer.

Campaigning for independent candidates sends the wrong message, implying that electing a minority government is the key to getting change.

Even in a minority government Labor is not going to accept dramatically improved policies. Labor in government will always defend the interests of business to keep making profits and expand gas and coal mines.

Climate activists will need to fight whoever holds power after the election to demand a transition away from fossil fuels.

This means building mass street mobilisations and building power in our schools, universities and workplaces. We need more actions like the Climate Strike in September 2019, with 350,000 nationwide and 120,000 in Sydney’s Domain.

When independents have voted against cuts and neo-liberal policies in the past, it has often been pressure outside of parliament that has pushed them to do so. In 2014, the Senators elected by Clive Palmer only opposed the deregulation of university fees after enormous public opposition and rallies.

The same goes for major parties. Mobilisations in the streets and workplaces have halted coal seam gas projects and led to the scrapping of offshore detention the first time around in 2008. Protests and campaigning forced Morrison to get children off Nauru and pushed Labor to back the Medevac legislation in 2019.

Union and working class mobilisation to join protests and ultimately use their industrial strength to strike can bring enormous power to social movements.

The Green Bans movement of the 1970s saw the Builders Labourers’ Federation refuse to work on projects that were destructive to the environment or local communities. There was strike action against the Vietnam War and against uranium mining in Australia in the 1970s.

This kind of power could be used to halt new fossil fuel projects and demand real climate action. The ETU’s announcement in 2021 that it will not work on the Narrabri gas project is a step in the right direction.

The climate movement has to stick to demands for the kind of climate transition we need–for 100 per cent renewable energy and zero emissions by 2030, not 2050. And the movement also needs to articulate a vision for the climate transition that is not left up to the market, but 100 per cent publicly-owned and run renewable energy, thousands of new well paid climate jobs and Indigenous justice.

Climate activists should be campaigning to get rid of the Morrison government once and for all. But time spent campaigning for independent candidates is time squandered. Climate independents cannot be relied upon to deliver the transition we need.

To win real action on climate, we need to build a bigger, more confident movement on the streets, at schools, on campus and at work—starting with the School Strike for Climate strike on 25 March.