Deals in parliament won’t deliver the climate action we need 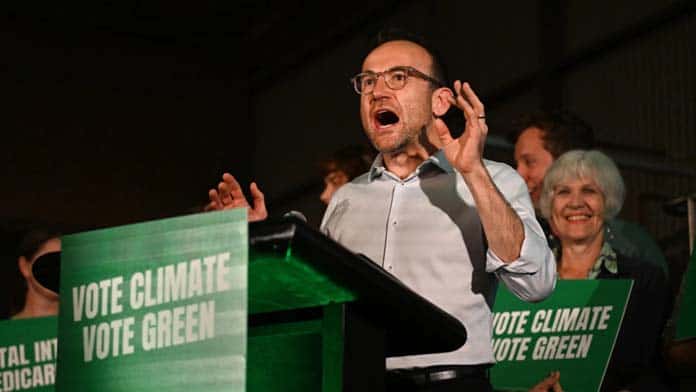 The Greens hailed the 2022 federal election as a “greenslide”, winning four seats in the lower house and 12 senators. It was the party’s best ever election result but it fell short of delivering them the balance of power they had hoped for.

With The Greens winning 12 per cent of the national vote and seven teal independents elected, the result demonstrated support for action on climate change beyond what Labor was offering.

Labor’s pathetic climate target of 43 per cent reduction in emissions by 2030 is set to pass federal parliament with The Greens’ support.

Greens Leader Adam Bandt claims the party “improved” the bill through ensuring the 43 per cent target was a floor not a ceiling. But The Greens conceded on their key demands of a 75 per cent reduction target and a moratorium on new coal and gas projects.

So little did The Greens secure that Deputy Prime Minister Richard Marles argued they got “nothing” in the negotiations. Labor didn’t need to entertain The Greens’ demands, as Energy Minister Chris Bowen made it clear their climate policies could be implemented without legislation.

The Greens have the numbers in the Senate to block legislation but this does not give them the power to force Labor to deliver serious action.

Bandt says the agreement on the climate bill was only “round one” and that “the fight to stop Labor’s new coal and gas mines continues”.

But instead of building a climate movement on the streets that can win climate demands, The Greens’ focus is entirely on parliamentary negotiations with Labor to extract whatever small concessions they can.

Adam Bandt used a speech to the National Press Club to lay out his next steps. But all his plans are focused on parliamentary negotiations.

Bandt has threatened to use the Senate to disallow Labor’s climate Safeguards Mechanism for industry. But this would require Liberal support. He has pledged to “comb the entire budget for any public money … going to fossil fuel corporations”.

But unless The Greens are willing to block the budget, something they refused to do even with Tony Abbott’s 2014 horror budget, they have little power over this.

The government already assesses and approves new projects based on “matters of national environmental significance” including threatened species, international recognised wetlands and world heritage sites, but climate change impact is not one of the matters currently considered.

The trigger would not prevent new fossil fuel projects from being approved. The Minister would need only to “consider” the climate impacts when giving projects approval.

And the current regulation system under the EPBC Act is already failing to prevent environmental damage. A 2020 independent review of the legislation found it was “outdated and not fit for the purpose of environmental protection”.

The Greens are anxious to avoid being presented as blocking action after a media onslaught when the party blocked Labor’s Carbon Pollution Reduction Scheme (CPRS) in 2009. But they were right to do so—the scheme was worse than nothing.

The CPRS would have resulted in no real cuts to emissions for 25 years, simply passing the cost of action onto ordinary people.

It promised over $20 billion in compensation to fossil fuel companies, food processing businesses and power generators that would have inflated their profits while energy prices soared.

It would have locked in a pathetic 5 per cent emissions reduction target until 2020. According to modelling from the Treasury, not a single coal power plant would have closed until 2033. All the actual emissions cuts relied on dodgy offset schemes.

The CPRS was designed to seem like something was happening about climate change, while ensuring that fossil fuel industry profits continued.

But blocking bad legislation alone is not the answer to solving climate change. We need a climate movement that can pull people onto the streets and out of their workplaces to stop new fossil fuel projects and demand a just transition to 100 per cent renewable energy.

The School Strike for Climate protests in 2019 did far more to make climate change an issue and generate pressure for action than anything that has happened in parliament. People power movements have also stopped individual polluting projects, like the Bentley blockade against coal seam gas mining in 2014.

Instead of seeing politics as being all about parliamentary horse-trading, The Greens could use their parliamentary platform and resources to mobilise their members, climate activists and unions to join struggles on the streets to pressure Labor and force real action on climate change.